It’s a timeless conundrum: you want to celebrate the father in your life by buying him a fragrance.

But which scent do you buy?

The selection is dizzying. And there are so many metrics by which to judge a scent. Do you go for the fastest-selling fragrance in Australia of all time? (That would be Thirst, by Victoria Bitter – yes, that VB – which is housed in a bottle shaped like a stubby, apparently smells both like “bitter citrus” and “icy”, and sold 25,000 bottles in 72 hours when it was released last year. $19.95 for 75ml, Chemist Warehouse.) Or do you go for what your dad’s idol once wore? Like iconic 1960s gospel singer Bobby Womack who wore Estee Lauder Cologne because, as he once said: “[Twistin’ The Night Away singer] Sam Cooke always wore it”? 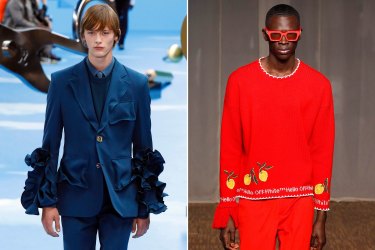 Genderless fragrances are on the rise, following in the footsteps of recent fashion collections that defy gender norms from the likes of, from left, Louis Vuitton and Off-White. Credit:Getty Images

“I would think about what kind of compliment would he want from his scent,” says Samantha Copland, a scent designer and CEO of Perfume Playground, which runs courses to teach people how to make their own custom fragrances. “[Men frequently] either want a compliment for being rich and earthy, or for being fresh and clean. [So] think about what you want your dad to feel like, and then go for what kinds of scents actually match up with those.” 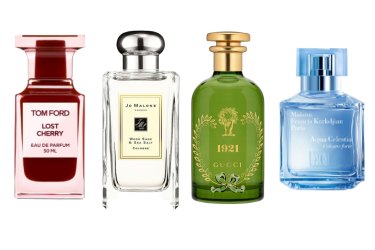 Another fail-safe approach, says Laura Curtis, fragrance education manager at Mecca, is to think about what type of scents the man you’re buying for has long gravitated to. “Most people are drawn to the same fragrance families throughout their lifetime,” says Curtis, listing off the most common ones: florals, woods, fresh fragrances or amber fragrances. “You can just guess that it’s probably to do with their scent memories that they formed at a young age. Maybe their grandmother used to bake them beautiful cinnamon doughnuts,” she says, referring to those who love gourmand scents, which are known for being sweet or smelling good enough to eat. Gourmand scents often include notes of vanilla, caramel, cotton candy, honey and chocolate. Examples include Tom Ford’s Lost Cherry ($485 for 50ml, Mecca, which has been described as drying down to smell like a “maple tart”) and Lynx Leather and Cookies body spray ($4.90 for 165ml, Woolworths).

But even if your father’s mum was no baker, there’s a chance he might be newly interested in a gourmand scent. Because, historically, says Copland, people are drawn to them during times of crisis.“With the terrorist attacks” – on September 11, 2001, in New York City – “there was a real strong movement to those kind of vanilla notes”, she says, adding that this is because such scents evoke feelings of comfort and familiarity. And a desire for both, she adds, “is probably coming in a little more strong at the moment, given the global pandemic and where we’re at.” This accounts, she says, for the recent release of numerous cosmetics and fragrances with manuka honey and rose, “which make people feel safe”. (Maison Francis Kurkdjian released L’Homme A la Rose, a scent designed for men, last year, $308 for 70ml, Mecca. Byredo will launch a unisex rose scent, Young Rose, in September.)

Which brings us to one of the latest trends: unisex or “genderless” scents. According to Rachel Duffy-Packer, general manager of beauty for David Jones, best-selling ones include any scent by Tom Ford (who is renowned for releasing unisex scents in every fragrance family) and Gucci’s newest fragrance, The Alchemist’s Garden 1921, a citrus floral scent ($520 for 100ml, David Jones). And don’t forget about a bottle’s shelf appeal. “If you go through Instagram, there’s as many shelfies dedicated to men that are interested in grooming as there are women,” says Duffy-Packer, noting the particular appeal of the “divine” green Gucci bottle, which comes housed in its own matching embossed bag and looks like something Daniel Day Lewis’ character, the fastidious couturier in Phantom Thread, would own.

“Our male-identifying customers are [also] becoming more and more comfortable [wearing scents outside] of those gender conventions, wearing florals and fruity fragrances,” says Curtis. “Fragrance really does reflect cultural trends, and we’re seeing more and more defy gender expectations when it comes to fashion, I think fragrance is really following that trajectory.”

“Fragrance really does reflect cultural trends, and we’re seeing more and more defy gender expectations when it comes to fashion, I think fragrance is really following that trajectory.”

If you’re really stumped, though, Curtis says to look for “fougère” fragrances – it translates to “fern-like” in French – which are “always the most popular category of family of fragrances for men”. These scents incorporate fresh, herbal and spicy notes like oak moss, lavender and vetiver. (The last note is often described as smelling like “freshly cut grass”.) Examples of fougère fragrances include: Vetiver Extraordinaire by Editions de Parfums By Frédéric Malle ($420 for 100ml, Mecca), Instinct by David Beckham ($12.99 for 75ml, Chemist Warehouse) and Versace Pour Homme ($102 for 50ml, David Jones).

Prices vary so much from brand to brand, so the decision is ultimately down to personal taste. (For proof, see our blind fragrance smell test video above, for which the lifestyle team sniffed fragrances ranging in price from $4.90 to $520. Due to COVID-19, we smelled the fragrances on pre-prepared cards separately in our homes, and filmed it remotely.)

Or, says Copland, you might just decide that what you really want for your dad is to bring out a side of him that you love, but rarely see.

Of the fragrance that Copland says she would make for her late dad, if she could, she says that while she would add the notes she knows he would like – sandalwood, black pepper, lemon and Tonka bean because he was “a little bit sweet” – she’d also add unexpected notes that she thinks he would’ve objected to, if told about them. “I would’ve been like, ‘Hey Dad, let’s get some tobacco, let’s get some cherry in there’,” says Copland, who teaches others to make bespoke scents in her Native and Solid Perfume lessons ($115 for a Zoom lesson and kit, perfumeplayground.co). “I would’ve been designing the scent for the party boy inside him that I never got to see as much.” Of dads in general, she says: “He’s going to say he loves it no matter what, isn’t he?”

Make the most of your health, relationships, fitness and nutrition with our Live Well newsletter. Get it in your inbox every Monday.