It’s been two years since Craig Melvin lost his beloved brother, Lawrence, to colorectal cancer and his efforts to raise awareness of the disease are as strong as ever.

The Today show host and his wife, Lindsay, hosted The Bottoms Up Invitational golf tournament over the weekend and he spoke to HELLO! in an exclusive chat ahead of the event.

Craig’s sibling was only 39 years old when he was tragically diagnosed with stage 4 cancer after suffering with abdominal pain and weight loss.

WATCH: Craig Melvin opens up about his family and his father overcoming addiction

It was a shock to him and his loved ones who were unaware that there was a history of the disease in Craig’s family.

Now the TV star is working tirelessly with the Colorectal Cancer Alliance in a bid to boost screenings, raise money for research and to destigmatize this type of cancer which is 100% preventable.

MORE: Craig Melvin takes on exciting project away from Today

“Before my brother died I became very involved in the Colorectal Cancer Alliance,” Craig told HELLO!. “It was very important to my wife Lindsay and I to, not only honor my brother’s memory but to do something which could save lives and prevent other people from going through what he did.” 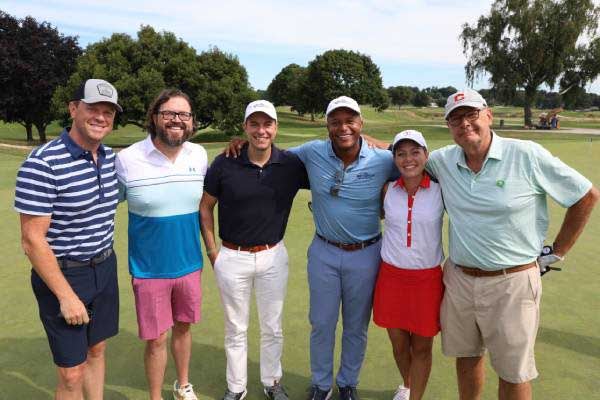 The idea of a charity golf tournament was settled upon, with the likes of Willie Geist, Dylan Dreyer, Darius Rucker and Robert Randolph set to play.

Before The Bottoms Up Invitational even kicked off, Craig revealed they had raised $800,000.

“We hope the auction and everything else will take us up to the million dollar mark. 100% of the proceeds go to the Alliance,” he confirmed. “This benefits their work and their mission – to get more people screened and to act as an advocate for those who have been diagnosed and to support caregivers.

Craig and his wife hosted the event

He continued: “A lot of the money goes to research as well. Unfortunately this type of cancer does not get the kind of attention – and consequently the resources – that other cancers do.

“We are trying to change that. We want to destigmatize the cancer. Nobody wants to talk about their colon or their rectums or blood in their stool. But slowly this is shifting.”

Craig said that this type of cancer is “100% preventable,” making the loss of his brother that much more heartbreaking.

Dylan also shared photos and said it was a great cause

He reiterated the importance of regular colonoscopies from the age of 45 and before that if you have a family history of the disease.

Sadly, Lawrence wasn’t aware of the history in his family and he was under the age of regular screening when he was diagnosed.

“Families don’t have many conversations about medical histories,” said Craig, and this is now so important.”

When asked if he would be willing to make The Bottoms Up Invitational, an annual event, the dad-of-two added: “We are talking about it for sure. If we can use our platform to raise money and awareness for this cause, we would absolutely do it again.”

To donate to the cause please follow this link www.bottomsupinvitational.org