Over the past several years, Schitt’s Creek went from hidden gem on Canadian television to the Netflix smash everyone couldn’t stop talking about. Now, Kim’s Convenience is poised to make that same transition. The quaint sitcom about a Canadian family running a convenience store has been airing since 2016 and is coming to an end with its fifth season in 2021. If you’re looking for a fun, light-hearted Netflix marathon, here are all the ways Kim’s Convenience is like Schitt’s Creek, as well as some of the key differences between the two shows.

Like the recent sensation Schitt’s Creek, Kim’s Convenience is a loving, joke-filled series about the struggles of an imperfect family. It follows the ups and downs of the Kim family: stubborn patriarch Sang-il (affectionately referred to as Appa), meddlesome but caring mother Yong-mi (called Umma), ambitious and progressive daughter Janet, and formerly rebellious black sheep Jung. At the beginning of the series, Jung is cut off from his family after a stint in juvie for petty street crimes, but over the course of the show, he begins to reform his relationships with Appa, Umma, and Janet.

The subject matter and format of Kim’s Convenience will likely remind fans a lot of Schitt’s Creek, so here are some ways the two shows are alike and different:

American audiences might not have been familiar with Schitt’s Creek before it was added to Netflix; that’s because it originally aired on Canada’s CBC. The Rose family blew up in the U.S. thanks to Netflix, and Kim’s Convenience can follow that same trajectory since it’s on Netflix as well.

2. They hinge on a fraught but ultimately loving family dynamic playing on generational differences.

A lot of the conflicts in Schitt’s Creek arise from Alexis and David not seeing eye to eye with their parents, and that’s also the source of the drama in Kim’s Convenience. Appa and Umma uphold traditional values that Janet and Jung rarely agree with, but in the end, all of the conflict that comes from that generational divide is quelled by the Kim family’s love for one another.

The Rose family learned a lot about the residents of Schitt’s Creek right away, and the townspeople are a big part of the show’s unique heart and humor. The same can be said for the customers who frequent Kim’s Convenience Store. Because much of Kim’s Convenience takes place in the store, the wacky shoppers play a big part in what makes the series special.

4. They combine snark and sarcasm with heartfelt family moments.

Probably the strongest connective tissue between the two shows is their tone. Both rely on quick-witted snark and sarcasm that can be cutting, but they balance that humor by taking time to highlight the real love among the central family behind those barbs. 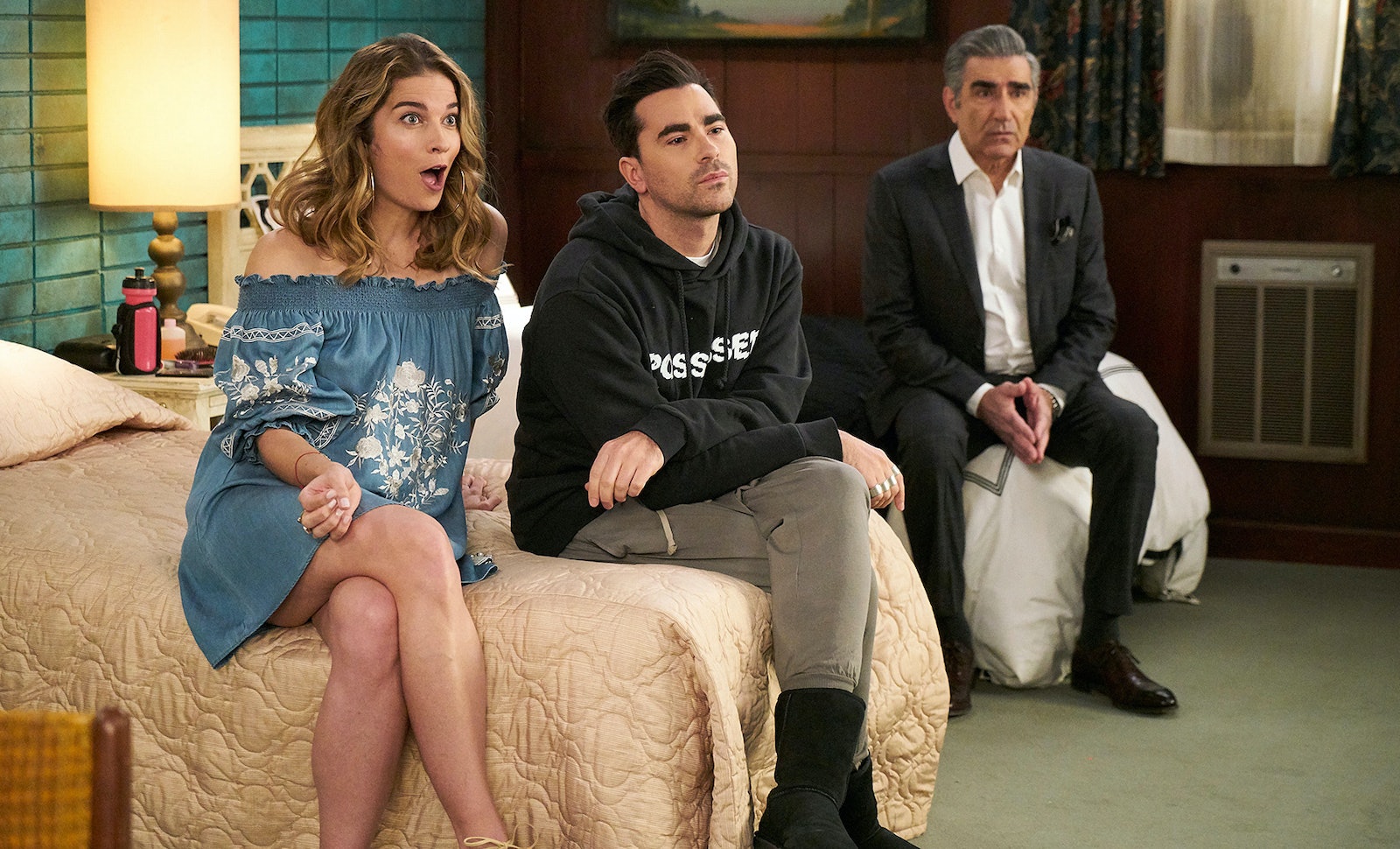 1. They have vastly different fashions.

When you turn on Kim’s Convenience, don’t expect to see anything on the level of Moira’s countless wigs or David’s couture sweaters. The Rose family may be all about style, but the Kim family prefers function, dressing in much more casual gear.

The reason for that difference in style goes back to the class divide between the Roses and the Kims. Much of the humor of early Schitt’s Creek revolved around the recently wealthy Roses having to adjust to life on a budget, whereas the Kim family has always known how to work hard for their income and stretch a dollar.

3. They are set in very different places.

Setting is an important element in both shows, as the bustling city of Toronto characterizes Kim’s Convenience almost as much as the podunk town of Schitt’s Creek colors its titular series. The big-city vibe of Kim’s Convenience differentiates it from Schitt’s Creek‘s small-town focus, as Jung leads a completely separate life from his family within the same city and Janet can attend a large college without leaving town.

The Roses definitely grow much closer in Schitt’s Creek, much like the Kims do throughout Kim’s Convenience. But the two families have an important difference in their dynamics. While the Roses are always together as one, the Kims splintered after Appa effectively cut Jung out of his life. As Schitt’s Creek tells the story of a family growing as a unit, Kim’s Convenience shows a family trying to piece back together broken relationships.

Kim’s Convenience and Schitt’s Creek are both available to stream on Netflix.