Debra Messing is coming to the swift defense of Alec Baldwin after Baldwin fired a prop gun on the set of his western film “Rust” and shot cinematographer Halyna Hutchins and director Joel Souza.

The “Will & Grace” actress, 53, issued a response to a conservative pundit who tweeted that a headline stating, “Alec Baldwin kills person with gun, criminal investigation underway,” was “accurate.”

“It is absolutely NOT,” Messing replied. “A prop gun was handed to him. He used it in the scene. Then a catastrophic event happened where Halnya [sic] Hutchins lost her life and Joel Souza was injured. I am praying for all of their families.”

Hutchins, 42, was airlifted to the University of New Mexico Hospital, where she was pronounced dead by medical personnel, the Santa Fe Sheriff’s department told Fox News on Thursday.

The “misfire” as the film’s production company called the incident, happened during a rehearsal of a scene, according to 911 dispatch audio obtained by Fox News.

Others also rushed to the defense of Baldwin, 63, including “Rick and Morty” writer Caitie Delaney who tweeted that “it is really not fair” that the “30 Rock” actor has become the “face” of the accident.

“Like obviously it’s the story but it is really not fair to have Alec Baldwin be the face of this tragedy,” Delaney wrote on Twitter. “He wasn’t in charge of loading that gun. Safety on set needs to be taken so much more seriously.”

The Santa Fe New Mexican reported that the actor, 63, was outside of the sheriff’s office in tears after the shooting. A spokesperson for Baldwin said the accident on set involved the misfire of a prop gun with blanks. According to sheriff’s spokesman Juan Rios, detectives were investigating how and what type of projectile was discharged. 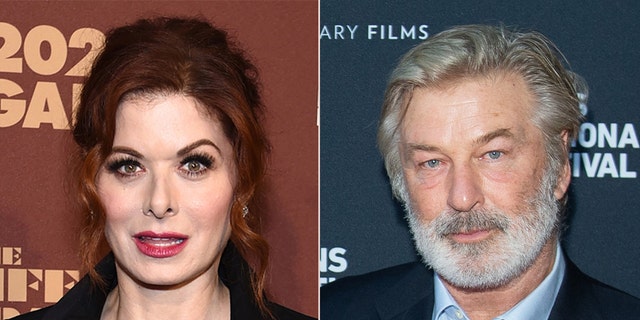 Debra Messing rushed to the defense of Alec Baldwin after the shooting on the set of ‘Rust’ left cinematographer Halyna Hutchins dead and director Joel Souza injured.
(Getty)

Souza, 42, has since been released from a hospital, according to actress Frances Fisher.

Production on “Rust” has been halted indefinitely.