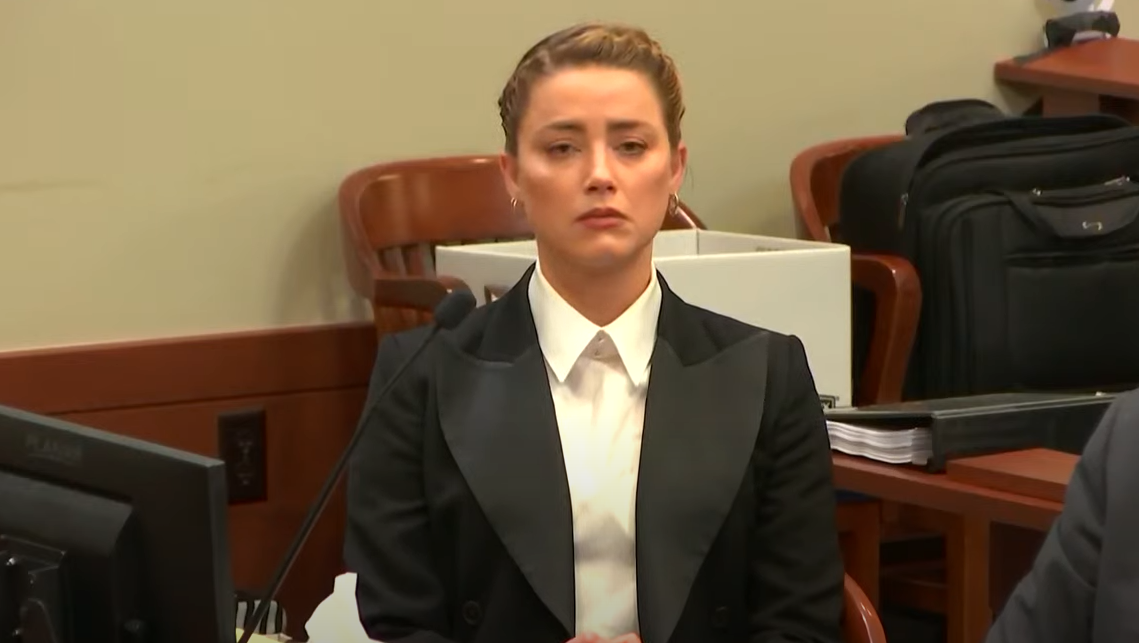 Amber Heard appeared to fight tears as a doctor spoke of allegations that Johnny Depp ‘penetrated’ her with a bottle in a tense row.

The Pirates of the Caribbean actor is suing ex-wife, 36, over her 2018 op-ed, in which she discussed her experiences of domestic abuse.

Despite Heard not naming him in the Washington Post piece, his team has argued that it falsely implies that she was physically and sexually abused by him during their marriage, something he has denied.

Appearing on the stand at Fairfax County Court earlier today as part of the defense, forensic psychologist Dr Dawn Hughes was asked about sexual violence in their relationship.

She said she was told about ‘a number of incidents’, which were documented in notes made by Heard’s doctor, Bonnie Jacobs.

Hughes said she was told that while drunk or high, Depp threw Heard onto a bed, ripped off her nightgown and tried to have sex with her.

‘These weren’t in loving moments, these were angry moments,’ she said.

Discussing another alleged incident, the psychologist continued: ‘Depp performed a cavity search and was looking for drugs and felt it acceptable to rip off her nightgown and stick his fingers up her vagina to look for cocaine, thought that maybe she was hiding them there’.

Heard appeared visibly emotional as Hughes continued her testimony, and said the incidents happened in a ‘drug fuelled rage’, claiming that an alleged situation in Australia was ‘one of the most severe’.

She told the court that Depp beat his ex, choking her and telling her “I’m going to f**king kill you, I hate you” during an argument, before grabbing a bottle that was on the bar and penetrating her with it.

Describing the incident, she said Heard thought at the time: “God, I hope it’s not the broken one.”’

The shocking claims previously emerged earlier in the trial, which began last month, and Depp vehemently denied them at the time.

When the claims were first shared in court last month, he shook his head at the comments.