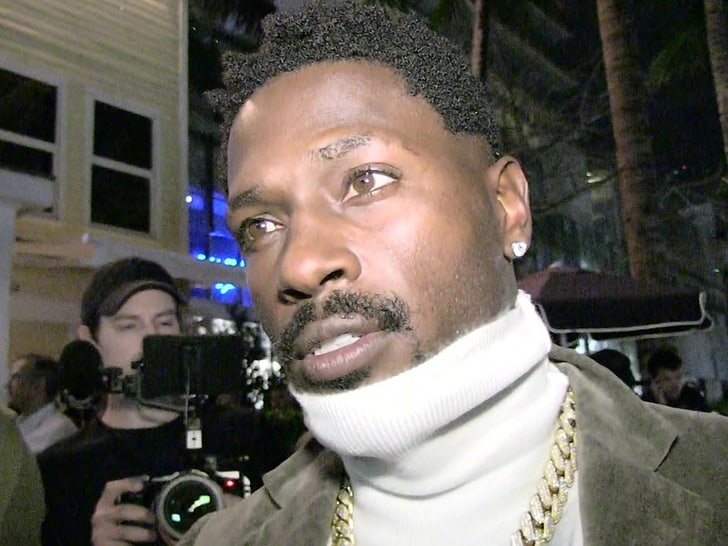 Antonio Brown was named in a police report in Oct. — after allegedly going berserk at a guard gate stand at his swanky Miami community back in October, smashing a security camera in the process.

It all went down on Oct. 15 at the fancy Hollywood Oaks private community, according to a police report obtained by the Miami Herald.

Brown was reportedly furious that the guard at the security gate wouldn’t let a guest inside the community unless AB was physically at the gate to grant access.

So Brown, according to the police report, hopped on his bicycle and sped to the gate where he allegedly went crazy on the guard — and took out his aggression on a security camera.

According to the police report, Brown cussed out the female security guard — saying, “Why are you wasting my f***ing time? You need to let my guest through the f***ing gate.”

Brown also allegedly threw his bicycle at the arm of the guard gate and then yelled at the property manager — calling her a “racist bitch.”

The Hollywood Police Dept. responded to the scene where an officer says a blue bike was still at the guard shack when they arrived — jammed between the arm and the motor.

It gets worse for Brown, cops say they reviewed security footage which showed AB smashing the security camera and throwing the bike.

So, why wasn’t Brown arrested or charged with a crime?

Cops say in the police report the president of the homeowners association did NOT want to press charges against Brown out of fear the NFL star “may retaliate against her employees.”

But, when contacted by the Miami Herald, HOA president Sylvia Berman downplayed the incident and said Antonio has since paid to replace the security camera.

Berman also told The Herald she thinks AB simply had an “emotional reaction” that day — and then praised him as a “hero” for helping the Tampa Bay Bucs beat the Carolina Panthers this weekend.

As for cops, The Hollywood PD “exceptionally cleared” the case on Nov. 5, according to The Herald … which means it’s unlikely he’ll face charges moving forward. Prosecutors say they have not been presented with a case.

Of course, Antonio Brown has been accused of having an explosive temper several times in the past — it’s well documented.

He’s thrown furniture off the balcony of an apartment complex, he’s berated police and the mother of his children on camera and he was arrested for allegedly physically assaulting a moving truck driver.

In fact, Brown was suspended for the first 8 games of the 2020 NFL season due to his off-the-field behavior.

Brown officially signed with the Tampa Bucs on Oct. 27 and made his debut with the team in Week 9 against the Saints.

Our Bucs sources tell us the team is aware of the alleged incident and is looking into it.

11/16/2020 Celebrities Comments Off on Antonio Brown Accused of Smashing Security Camera, Dodges Criminal Charges
Recent Posts
We and our partners use cookies on this site to improve our service, perform analytics, personalize advertising, measure advertising performance, and remember website preferences.Ok