Is a Chris Brown and Kanye West collaboration on the horizon? It’s certainly a possibility, given Chris, 32, shared a cryptic message involving Kanye, 44, on his Instagram Story on Tuesday, July 20. “Dat Yeezy and Breezy,” Chris wrote, adding glancing eyes emojis. Kanye is set to release his 10th studio album, Donda, likely in the coming days, and so fans believe that the two rappers have a song together on the album. If not, their collaboration could be coming on Chris’ next album Breezy, which is supposed to come out in 2022.

Following Chris’ subtle post, fans reacted excitedly to the possibility Breezy and Yeezy worked together again. “OMFG LESGOOOOOO,” one fan said on Twitter with a crying eyes emoji, while another said, “Thought I’d never see that again.” As fans recall, the superstar rappers previously teamed up on the hit song “Waves” from Kanye’s 2016 album The Life of Pablo, as well as on “Down” from Chris’ 2007 album Exclusive.

It’s still unclear when Donda – named after Kanye’s late mother – will arrive. There are rumors that it’ll drop on Friday, July 23, given the fact that the “All Mine” rapper is throwing a massive listening party for the album the day before. The party is set take place in Atlanta, Georgia in Mercedes-Benz stadium, which can hold up to 71-75,000 fans. Kanye already had a listening party in Vegas on Sunday, July 18, during which he sang a track called “Welcome To My Life.” The song’s lyrics reportedly address the breakdown of his marriage to Kim Kardashian, his notorious Twitter meltdowns, and his failed 2020 presidential campaign. 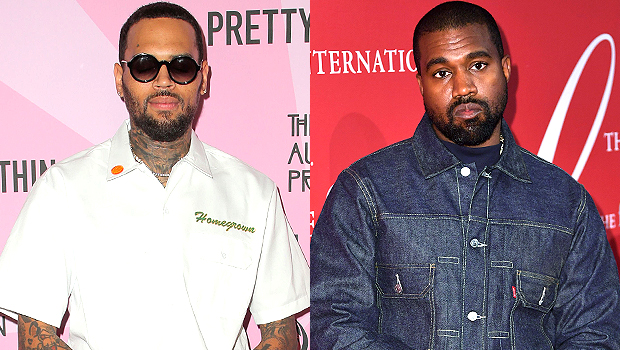 Following the Vegas event, social media personality Justin Laboy, who claimed to have been in attendance, gave Donda some high praise. “Kanye played his new album for me & [Kevin Durant] last night in Vegas. The production is light years ahead of its time, and the bars sound like he’s broke & hungry trying to get signed again,” he tweeted. “Any artist who plan on dropping soon should just push it back.” He followed that up with “ALBUM OF THE YEAR DON’T @ ME.”

Fans have been awaiting new music from both Kanye and Chris. Kanye’s most recent album, Jesus Is Born, dropped in October 2019. He then released a collaborative album of the same name two months later that featured his iconic Sunday Service Choir. Meanwhile, Chris has not released an album since 2019’s Indigo. However, he has confirmed that his next album Breezy is coming next year and fans cannot wait for its arrival — especially if it features Kanye!