There are some thing that Chris Brown, 32, just can’t tolerate, and it seems like homophobia is one of them. The rapper posted an ambiguous Instagram Story on Thursday July 29, which appeared to reference rapper DaBaby‘s, 29, homophobic rant at Rolling Loud Miami over the weekend. Chris seemed to call the rapper out for not appreciating and respecting fans of all backgrounds.

DaBaby was a featured performer at the hip hop and rap festival Rolling Loud, which was held in Miami on July 26. “If you didn’t show up today with HIV, AIDS, or any of them deadly sexually transmitted diseases, that’ll make you die in two to three weeks, then put your cellphone lighter up… Fellas, if you ain’t sucking d*** in the parking lot, put your cellphone lighter up,” DaBaby said onstage at the festival. People quickly criticized the “Levitating” rapper for the remarks.

Chris didn’t name names, but it appeared to be a direct shot taken at the Baby On Baby rapper. The Instagram story had some advice that perhaps DaBaby needed to hear. “Shut the f**k up… Do yo shows, thank everybody,” he wrote. “Then get the f**k off stage.” On Twitter, people noted Chris’s controversial past, and said that it’s really bad when he makes a good point. “If Chris Brown starts dragging you and he’s RIGHT… you really gotta ask yourself where you went wrong. He barely even talk anymore,” one person wrote. Chris wasn’t the only musician to call out DaBaby. Elton John also released a statement that condemned the rapper and tried to correct some of the misinformation about HIV and AIDS that seemed to fuel the rapper’s rant. 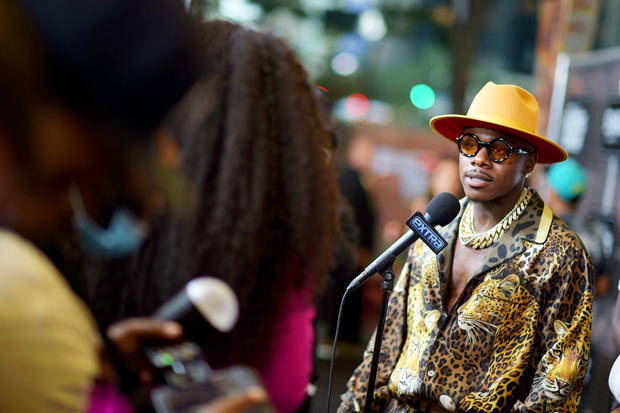 The homophobic rant wasn’t DaBaby’s only controversial moment during his Rolling Loud set. The rapper took the stage after Megan Thee Stallion, and DaBaby brought the “Savage” rapper’s ex Tory Lanez onstage during his set. Megan accused Tory of shooting her in the foot in August 2020. Tory was charged with one felony count of assault with a semiautomatic firearm and one count of carrying a loaded, unregistered firearm in a vehicle. He pleaded not guilty.

While fans may be happy that Chris has spoken out against DaBaby’s homophobic rant, the singer has a controversial history of his own and has faced plenty of public scrutiny. He was arrested at the 2009 Grammy Awards for physical assault, after he brutally beat singer Rihanna, who he was dating at the time. The musician was accused of hitting a woman in June 2021, following an argument with her.