The end has come for Donald Trump, at least when it comes to his preferred communication method. He’s been permanently banned from Twitter, and celebs can’t get enough of dragging Trump over it.

Despite pleas from so many people to ban Donald Trump from Twitter during his presidency due to his continuous tweeting of dangerous statements, misinformation and outright lies, it has finally happened with just 12 days to go in his term. It took Trump inciting a Jan. 6 riot among his supporters where they vandalized and looted the U.S. Capitol building, along with causing Congress to be evacuated for their safety for the ban to finally happen on Jan. 8. Now that it has, celebs and others are rejoicing and mocking the outgoing POTUS.

Chrissy Teigen — who Trump publicly feuded with on Twitter, calling her “John Legend‘s filthy-mouthed wife” showed the grab of Trump’s suspended account and wrote “HAHAHA” with every available character in complete laughter. Stars Wars icon Mark Hamill was thrilled, doing the same with the screengrab and asking “How’s YOUR day going?” Bette Midler simply wrote “THANK YOU TWITTER” and asked fans to retweet the message of gratitude to the service, while comedian Jim Gaffigan wrote, “Thank you @Twitter, @jack @TwitterSafety for putting the safety of the people over profit! Now to find some Republicans with that courage.” 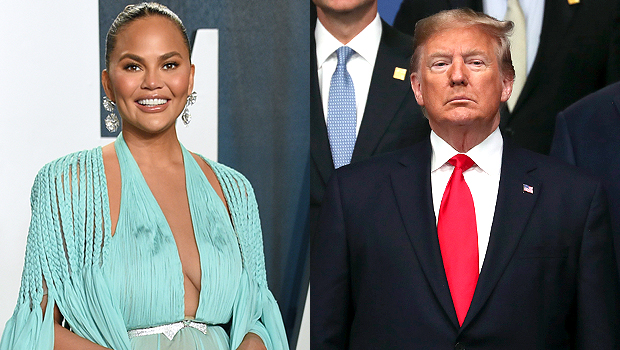 Top Chef host Padma Lakshmi tweeted that it was “about time” Trump was banned, and used a meme giving her famous goodbye phrase to the eliminated contestants, with “Please pack your knives and go.”

Actor Michael Rapaport said the Trump ban “made my day” and praised Twitter Chief Jack Dorsey for finally banning Trump. He also shared a video of him laughing hysterically about Trump getting tossed from the service:

The 74-year-old’s son Donald Trump Jr. was furious with his dad’s ban, tweeting, “So the ayatollah, and numerous other dictatorial regimes can have Twitter accounts with no issue despite threatening genocide to entire countries and killing homosexuals etc… but The President of the United States should be permanently suspended. Mao would be proud.” He then added, “We are living Orwell’s 1984. Free-speech no longer exists in America. It died with big tech and what’s left is only there for a chosen few. This is absolute insanity!”

On the afternoon of Jan. 8, Twitter Safety’s account posted “After close review of recent Tweets from the @realDonaldTrump account and the context around them we have permanently suspended the account due to the risk of further incitement of violence. In the context of horrific events this week, we made it clear on Wednesday that additional violations of the Twitter Rules would potentially result in this very course of action.”

The message continued, “Our public interest framework exists to enable the public to hear from elected officials and world leaders directly. It is built on a principle that the people have a right to hold power to account in the open. However, we made it clear going back years that these accounts are not above our rules and cannot use Twitter to incite violence. We will continue to be transparent around our policies and their enforcement.”