Declan Donnelly, 44, who is best known for presenting alongside Ant McPartlin on the likes of Saturday Night Takeaway, Britain’s Got Talent and I’m A Celebrity… Get Me Out Of Here!, reportedly earned a whopping £14,000 when presenting solo in 2018. Dec presented on ITV alone from 2018 to 2019 while Ant took a year’s break from presenting.

We are still together.

Dec hosted Saturday Night Takeaway by himself and I’m A Celebrity with This Morning host, Holly Willoughby, 39, as Ant stepped back from his presenting duties.

It was confirmed from documents filed at Companies House that Dec made over £5million from June 2018 to June 2019, according to The Sun.

The documents read that he earned £4million through his company, Deecourt Limited, and the rest through firms he co-owns with Ant.

Ant is now back on screen alongside Dec to host Saturday Night Takeaway and they recently broke ratings records after 11.1 million viewers tuned in during the nationwide lockdown. 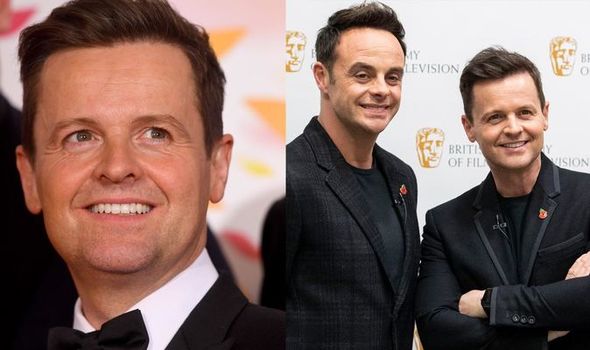 After their 30 years of presenting together, Ant and Dec are planning to release their own book, Once Upon A Tune: celebrating 30 Years Together On Telly.

Excited about their new project which is said to launch this Autumn, Ant previously revealed to the Press Association: “If you had the 14-year-old us that we’d still be working together on some of the biggest TV shows in the world, we’d have laughed you out of Byker Grove.”

The presenter said he and Dec are “still having more fun than anyone”.

He added: “‘It would have been too much for our tiny minds to comprehend but here we are still together and still having more fun than anyone really should be having at work.”

The Geordie host said the book will involve the pair “looking back” and looking at their “renewed ambitions”.

Ant continued: “We also wanted to take this opportunity to stop and look back so that we can look forward at what the next 30 years may hold and what our renewed ambitions will be.

“It is our way of giving people more than just what they see on TV, lifting back the curtain on our career so far and sharing the moments and stories that still make us smile.”

Dec also revealed his excitement about sharing details of the iconic duo’s time together on TV.

He said: “It has, until now, involved a lot of tea (green for me, builders for Ant), chocolate biscuits and laughter.

“In this final period of writing it is mostly video calls with dogs on our knees, but still trying to make each other laugh – which in essence is what we’ve spent the last 30 years doing!”

Dec also told the publication it took both him and Ant by “surprise” that they had been presenting together for 30 years.

The Saturday Night Takeaway host explained: “It took us by surprise that we’d been together for 30 years; it has gone by in a flash.

The father-of-one revealed what the process of planning and writing the book has been like for the presenters.

‘When we realised, we began to reminisce and made ourselves laugh at some of the stories we remembered (we are admittedly our own best audience!).”

After the duo announced they will be releasing a book in September, fans expressed their excitement over their next venture and wished them luck.

Related posts:
04/02/2020 Celebrities Comments Off on Dec Donnelly ‘earned £14,000 a day’ without co-host Ant McPartlin
Recent Posts
We and our partners use cookies on this site to improve our service, perform analytics, personalize advertising, measure advertising performance, and remember website preferences.Ok