Derek Jeter was inducted into the Baseball Hall of Fame on Wednesday, September 8, according to ESPN. The former New York Yankees slugger took the stage in Cooperstown, New York, to give a speech. “There was only one thing in my life I wanted to be,” Jeter said, “and that was a shortstop for the New York Yankees. And now, I’m a Yankee forever,” he added. Jeter went on to tell the crowd that playing for the Yankees and representing the people of New York has been “one of the greatest honors” of his life. Jeter went on to acknowledge his former teammates, and his former manager, Joe Torre, who was in attendance at the event, according to The Washington Post.

Jeter had the support of his whole family on one of the most special days of his career to date. Not only were his parents and his grandmother in attendance, but his wife, Hannah Jeter, and the couple’s two daughters, Bella and Story, sat in the front row. “For me, the love of the game and the success I had playing it, starts and ends with family,” Jeter said in his speech, according to the New York Post. The appearance by Bella and Story marked one of the only public appearances they’ve ever made. Keep reading to learn more.

Derek Jeter's daughters are so cute 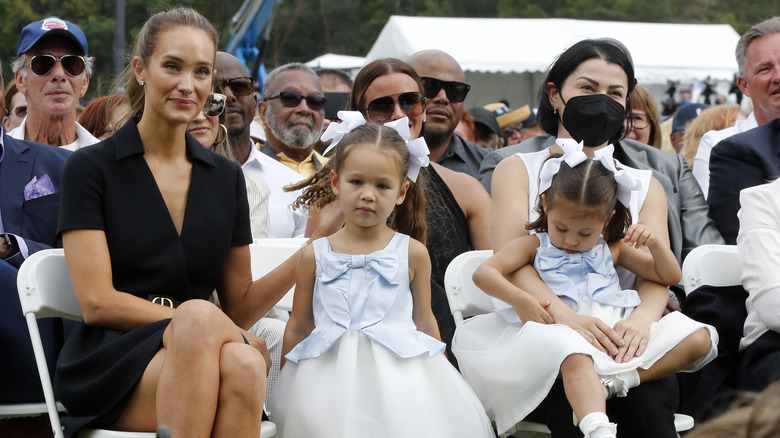 Derek Jeter and his wife Hannah Jeter got married back in 2016, according to People magazine. The following year, the couple welcomed a baby girl named Bella Raine Jeter, according to TMZ. In 2019, Story Grey Jeter made them a family of four. Her birth was confirmed by a tweet from The Player’s Tribune that appropriately welcomed “#2.”

At the Baseball Hall of Fame, Hannah sat amongst the crowd with her daughters, Bella and Story, who were dressed in identical blue and white dresses. The girls were seen cheering on their dad — even if they didn’t quite understand what was going on! Now a proud dad of two, Derek Jeter added a special message to his beautiful girls in his speech. “Bella and Story, I want you to know that your dad was far from perfect. I made my fair share of mistakes on and off the field. But through it all, I tried to do the right thing. I found something I was passionate about and I worked harder than anyone else. I didn’t take any shortcuts to achieve it,” Derek Jeter said according to the New York Post, adding, “I have zero regrets in my career, other than the fact that I didn’t get a chance to share it with you. What I will share is my story. Most of it won’t be what I accomplished on the field. It’s going to be the lessons I learned off of it. I hope I always make you proud.”