It looks like former President Donald Trump hasn’t given up on fighting for his return to the White House. However, after months of falsely claiming the 2020 election was fraudulent, per Newsweek, the once commander-in-chief finally admitted his defeat to President Joe Biden.

“We didn’t win,” Trump bluntly told Fox New’s Sean Hannity during an on-air phone interview on June 16. “We were supposed to win easily, 64 million votes. We got 75 million votes,” he claimed before teasing, “but let’s see what happens on that.”

Although Trump finally came to terms with his election loss, that doesn’t mean he’s backing his successor. He continued to tell Hannity that the country is in a “shocking state,” seemingly blaming Biden for the rise in oil prices, however, the heightened fees began during the pandemic as a result of restricted travel. According to him, the price of oil was $1.87 when he left office, and now it’s “over $3,” adding, “Frankly, for our country, it is a disaster. It’s going to stop everything.”

With his thoughts on the country’s state in his absence, it seems like he’s itching to get back to the Oval Office. Keep scrolling to see more details about his possible 2024 presidential run.

Donald Trump thinks the people want him back in office 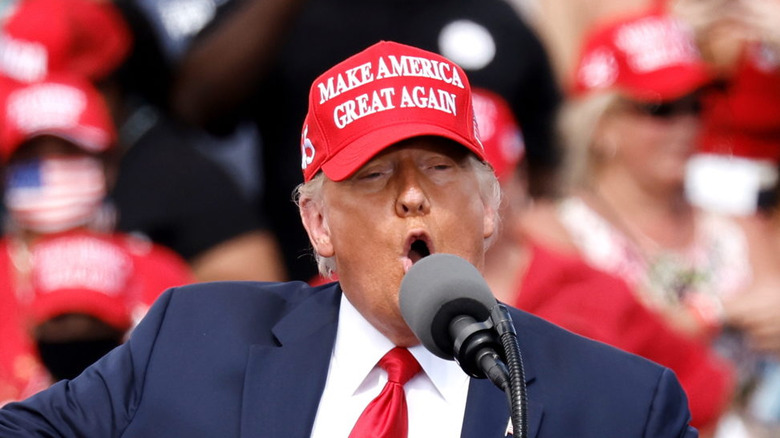 Despite finally admitting his loss in the 2020 election, Donald Trump hasn’t given up on a second term in office, whether it’s consecutive or not.

While speaking with Sean Hannity, the former president revealed his intentions for running in 2024, claiming that the polls suggest he could be a popular candidate. Depending on the turning out of the midterm elections, Trump said he will “be making a decision on 2024,” adding, “If you look at the numbers, people are liking me more than ever before.”

“This is not just border, this is death and criminals pouring into our country,” he continued to claim. “They are looking at the economy and inflation, looking at interest rates and gasoline prices,” and with that, he said, “I guess it is making me very popular.”