PARIS — Paris on Saturday was the only place to be for die-hard Jim Morrison fans.

Fifty years after his death at age 27, rock music lovers from France and across the world came to the Pere-Lachaise cemetery in eastern Paris where The Doors’ frontman is buried. Many brought candles and pictures, and some burned incense sticks near his grave as police watched nearby.

“Jim and The Doors have been heroes of ours since we were kids. It’s an honor to be here and celebrate the 50th anniversary of his death today,” said Dutuar Platzek.

The 50-year-old fan made the trip from Halle, Germany with his childhood friend Mathias Barthel. The two had not been back to the Pere-Lachaise cemetery in over 25 years.

Year after year, the place has become a pilgrimage for fans of Morrison, known for his dark lyrics, wavy locks, leather pants, steely gaze and theatrical stage presence. He propelled The Doors to several major hits between 1965 and 1971, including “Light My Fire,” “Hello I Love You,” “Touch Me” and “Riders on the Storm.” 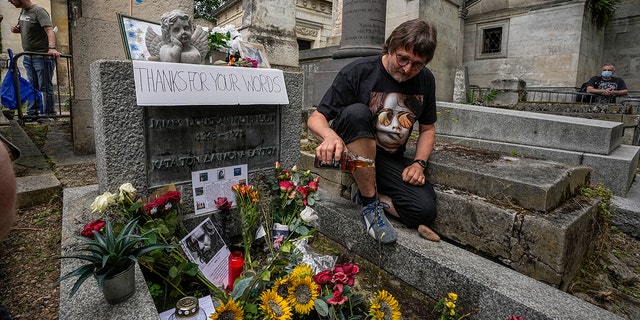 Torsten Marquardt of Germany pours some whiskey on the tomb of rock singer Jim Morrison at the Pere-Lachaise cemetery in Paris, Saturday, July 3, 2021. (Associated Press)

Michelle Campbell was 21 when Morrison died in 1971, living in Texas and studying photography. Her first “July 3rd” — the anniversary of Morrison’s death — was in 1989. Back then, the grave was unmarked and a fan had crafted a wooden cross.

She’s since moved to Paris and has been coming to Pere-Lachaise almost every year, taking photographs of Morrison’s grave and his fans, many of whom have become friends.

“(It’s like) people sitting around on couches in someone’s apartment, rather than a grave’s, just talking and meeting each other,” she recalled. “It was really lovely … I still come as much as I can because it’s just always so wonderful.” 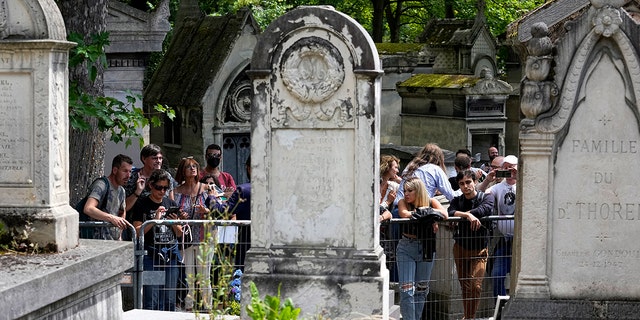 Fans gather at the tomb of rock singer Jim Morrison at the Pere-Lachaise cemetery in Paris, Saturday, July 3, 2021. (Associated Press)

Colleen Amblard drove seven hours from her hometown of Domancy, in the French Alps, to visit the grave. The 21 year-old student told The Associated Press “it’s very emotional to be here, to remember Jim Morrison … to show that he’s not forgotten.”

“We acknowledge his talent and the fact that he was a brilliant person, he was really a genius,” she said.

Like many other fans, Amblard was planning to visit other sites Morrison spent time in while living in Paris, from his apartment to the former nightclub where some say he died of an heroin overdose. 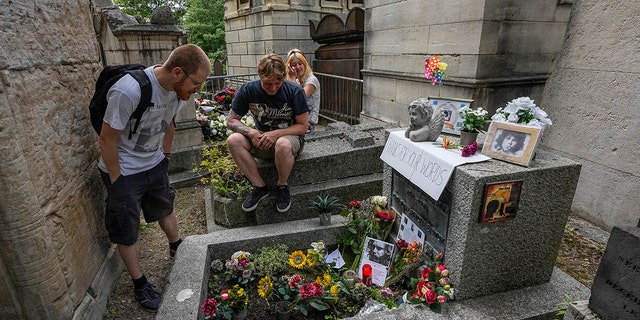 Joachim Tittmar from Germany, left, Walter Homburg of the Netherlands, center, and his girlfriend Kate Schirm gather at the tomb of rock singer Jim Morrison at the Pere-Lachaise cemetery in Paris, Saturday, July 3, 2021. (Associated Press)

Born in 1943 in Melbourne, Florida, Morrison was the son of a U.S. Navy officer and moved constantly as a child, growing up in Florida, Virginia, Texas, New Mexico and California.

He said he witnessed the aftermath of a terrible car accident on a Native American reservation as a child, an event that loomed large in his later lyrics and poetry. An avid reader, he was heavily influenced by the philosopher Friedrich Nietzsche, the poet Arthur Rimbaud and the surrealist dramatist Antonin Artaud. 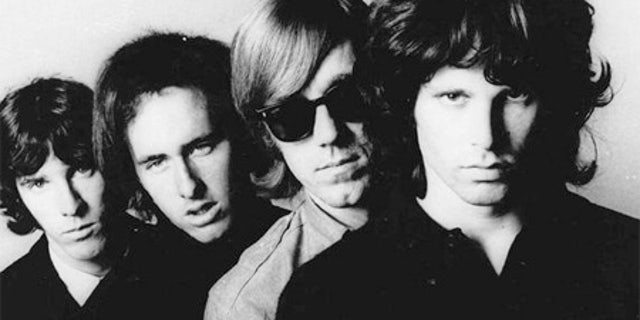 The Doors are seen in 1969. From left are John Densmore, Robby Kreiger, Ray Manzarek and Jim Morrison. (Associated Press)

Morrison and The Doors would burn brightly, releasing albums “The Doors” and “Strange Days” in 1967, “The Soft Parade” in 1968 and “Morrison Hotel” in 1970. Morrison’s dynamic stage presence was on full display during appearances on “The Ed Sullivan Show” and at the Hollywood Bowl.

But the band would burn out quickly as Morrison sank into alcoholism. He was twice arrested for his on-stage antics, including a Miami concert that saw him convicted of indecent exposure and profanity. He received a posthumous pardon in 2010. 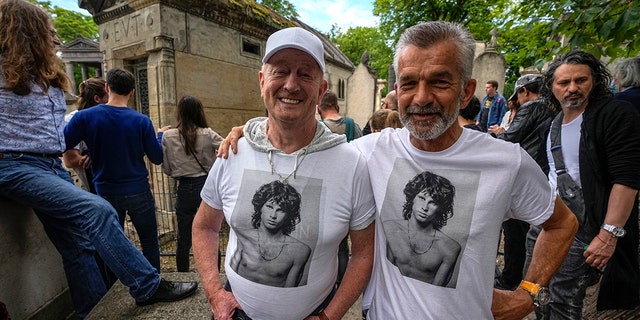 Morrison made his final album with The Doors, “L.A. Woman,” in 1971, and moved to Paris soon afterward.

There, on July 3, 1971, he was found dead in a bathtub. No autopsy was performed and accounts of what caused his death are disputed.

He was one of several rock stars — including Janis Joplin, Jimi Hendrix, Kurt Cobain and the Rolling Stones’ Brian Jones — to die at 27.

His status as a mythic figure for rock fans has never waned. On the 20th anniversary of his death in 1991, the Oliver Stone-directed biopic “The Doors” was released, starring Val Kilmer as Morrison.