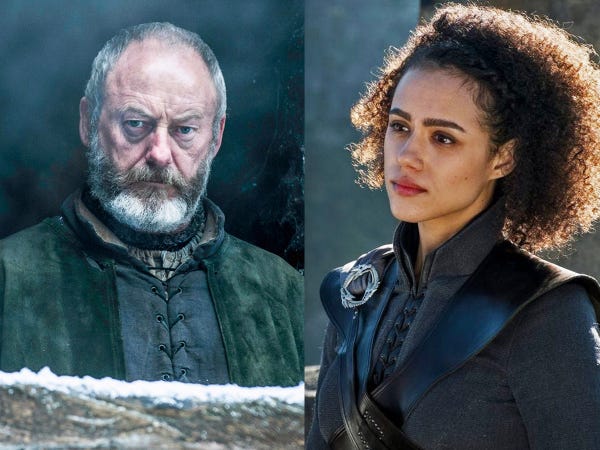 "Game of Thrones" star Liam Cunningham once had to stand up for his belief in how his character, Ser Davos, would behave around the younger women of Westeros.

In "Fire Cannot Kill a Dragon," a new oral history about HBO's hit fantasy series written by Entertainment Weekly's James Hibberd, Cunningham said he dug in his heels the suggestion was made that Ser Davos Seaworth would have romantic feelings for Daenerys Targaryen's advisor and friend, Missandei of Naath.

"There's a streak in Benioff that's willful," Cunningham said. "He likes to stir the s—. When we first meet Daenerys, Benioff and [director Mark Mylod] wanted Davos to have a crush on Missandei. And I fought them."

"It's the only thing I ever stood up to them on," Cunningham said. "The woman is a goddess, but with Davos' history with Lyanna Mormont and Shireen, you can't have him getting the hots for a young woman."

Shireen and Lyanna were two young preteen "Game of Thrones" characters who befriended the older Ser Davos. He was like a second father to little Shireen Baratheon before her tragic death.

"I'm not 100 percent sure David [Benioff] wasn't just doing it to annoy me," Cunningham added.

Then the actor is also quoted in the book recalling what he said to the showrunners: "You're not undoing my hard work engendering the sympathy of the audience to have him be a perv."

Davos and Missandei first met in the seventh season of "Game of Thrones," and only shared a few scenes together. By that point, Missandei was romantically involved with Dany's other trusted advisor and the leader of the Unsullied, Grey Worm.

As for Davos, he still technically had a wife and kids somewhere in Westeros. His wife and other sons were mentioned much earlier in the series, but eventually that little background detail was dropped from Davos' story.

By the time the eighth and final season of "Game of Thrones" came to an end in 2019, Missandei had been tragically killed on Cersei Lannister's orders and Ser Davos was named Master of Ships under King Bran's rule. There was no mention of his former family.

10/13/2020 Celebrities Comments Off on ‘Game of Thrones’ star Liam Cunningham fought against his character crushing on Missandei: ‘You can’t have him getting the hots for a young woman’
Recent Posts
We and our partners use cookies on this site to improve our service, perform analytics, personalize advertising, measure advertising performance, and remember website preferences.Ok