Dua Lipa is a GRAMMY winner once again!

“Oh my goodness. Wow, thank you so much. This is insane,” Lipa said while accepting her award. “Future Nostalgia means the absolute world to me and it has changed my life in so many ways.”

“But one thing that I have really come to realize is how much happiness is so important. I felt really dated at the end of my last album where I felt like I only had to make sad music to feel like it mattered. And I’m just so grateful and so honored because happiness is something we all deserve and need in our lives,” she continued.

Lipa continued by thanking her fans, her manager, her label and her team. “This means so much. Thanks to my family and friends watching at home, I love you, thank you,” she shared. 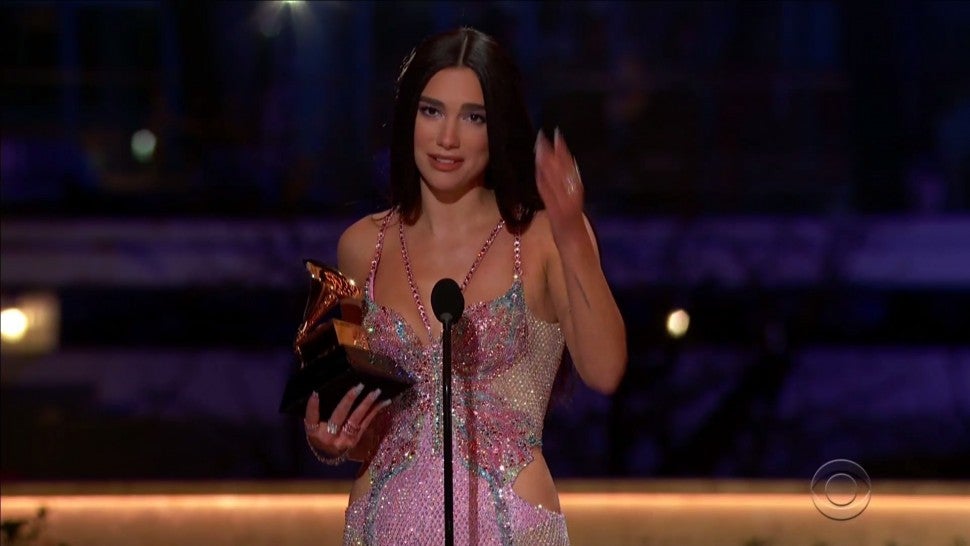 ET spoke with the 25-year-old pop star during rehearsals for music’s biggest night, where she shared her reaction to being nominated for some of the night’s biggest awards.

“Sometimes when you say it out loud, it’s a bit unbelievable and I’m a little bit overwhelmed,” Lipa marveled of her six nominations this year. “I mean, it’s bonkers, it’s mind-blowing, it’s amazing… These things really only happen in your dreams, so I feel like, well, I’m hoping no one is going to wake me up and be like, “All right, time for school!’ or something.”

Before Sunday, the “Physical” singer already had two GRAMMYs to her name, including her Best New Artist win in 2019 — which she nabbed over serious contenders like H.E.R., Chloe x Halle and Luke Combs — and she admits the early recognition only served as motivation on her sophomore album, Future Nostalgia.

“I feel like winning Best New Artist almost just pushed me to work harder,” she noted. “I’m like, OK, I got to prove that I deserve to be here.”

It’s paid off so far. Future Nostalgia was one of the biggest albums of 2020, after Lipa decided to go against the grain and release it in the early days of the pandemic last spring. While other artists pushed back their releases due to promotional or touring concerns, the English performer said she was hoping that her album could serve as a “form of escapism” for listeners, just like she felt while making it.

“When I was thinking about when I was going to put this album out, and whether it was the right time, I was like, you know what? The reason why I did this was to get away from any outside pressures,” she recalled. “And I was like, maybe it is the time to put this out and maybe it can serve as that for other people.”

“It was probably the scariest decision I’ve ever made — I had no idea how it would be received — but I’m just so grateful for the response,” she added.

See more in the video below.

Get the complete GRAMMYs winners list, plus GRAMMY Awards live updates at ETonline.com