52-year-old actress Halle Berry is proving she’s still got it, as evidenced by her latest steamy Instagram post. In the photo, Berry is pictured wearing a ripped, unbuttoned jean jacket with her long hair down in loose curls, and no shirt underneath. While Berry captioned the photo saying she was ‘lookin’ for a late night snack,’ fans agreed that Berry herself was the ‘snack.’

Halle Berry revealed that she got very intoxicated after her historic 2002 Oscar win and doesn’t remember most of the night as a result.

Berry, 52, co-stars alongside Keanu Reeves in the action hit “John Wick: Chapter 3 – Parabellum.” To promote her role in the film, she appeared on First We Feast’s Hot Ones alongside host Sean Evans.

While munching on spicy chicken wings, the host asked Berry about her 2002 Oscar win for “Monster Ball,” in which she became the first African American woman to win the Academy Award for best actress. Unfortunately, the star doesn’t remember much after getting her hands on the highly-coveted trophy. 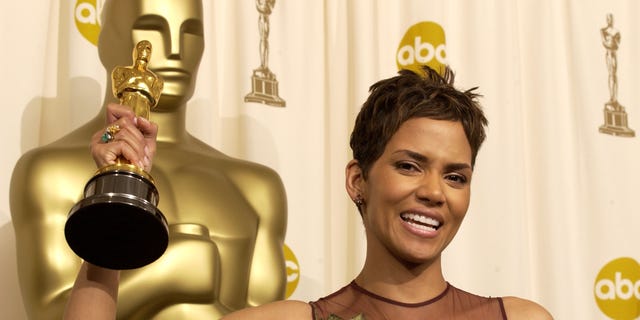 Halle Berry poses with her Actress in a Leading Role Oscar for ‘Monster’s Ball.’
(Photo by SGranitz/WireImage)

“I was inebriated … I don't remember any of it, none of it,” she explained. “Very shortly after I got that statue, I became inebriated to the point where the whole night is a wash.”

Berry was able to prove her point a moment later when Evans showed her a photo of herself in 2002 with Elton John at his famous post-Oscars party.

“Do you remember anything about Elton John’s party?” Evan’s asked.

“That I think I was there…” the star responded. “I must have because look we’re there.”

Berry plays a big role in the new “John Wick” film and has been working incredibly hard to get the physicality down to effectively play an assassin. In a video posted by the official “John Wick” Twitter page, she can be seen on a shooting range running drills with both handguns and a rifle.

In the video, Berry is complimented by her trainers for her “double taps” and even impresses Reeves, who was there to cheer her on and get in some training himself. Reeves, who does most of his own stunts, also underwent intense weapons training for all three movies. Still, he couldn’t help but marvel at Berry’s work.

06/07/2019 Celebrities Comments Off on Halle Berry reveals she got 'inebriated' after historic 2002 Oscar win, doesn't remember the night
Recent Posts