Antivirus software creator John McAfee had multiple run-ins with the law prior to his death on June 23, 2021. Per the New York Post, McAfee died by suicide in a Spanish jail cell after reports surfaced that the software tycoon would be extradited back to the United States to face federal charges for dodging taxes and failing to file tax returns.

Additionally, McAfee was indicted for fraud and money laundering conspiracy charges from two cryptocurrency schemes in March 2021, according to The Guardian. McAfee also made headlines when he fled the country in 2012, evading police questioning after his neighbor was found dead. The police ultimately cleared him of any suspicions.

Still, McAfee’s behavior in his professional and personal life was mocked and questioned by many. The antivirus software creator had an unusual social media presence, tweeting philosophical musings from jail before he died. Among his unusual tweets was one about his children. Find out how many children McAfee has below.

John McAfee has more kids than you can count 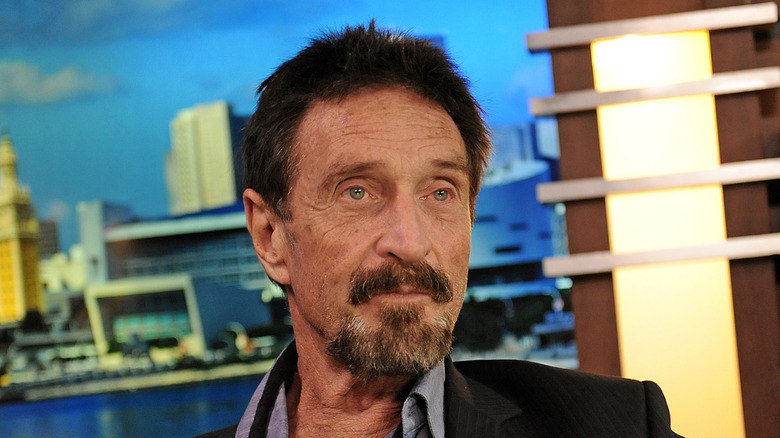 While not much was known about John McAfee’s personal life, apart from that he was married twice, he did reveal that he has children. “Since you asked: I have 47 children. 61 grand children. 19 great-grand children,” McAfee tweeted on January 18, 2020. “I have met none of my great-grand children.” McAfee added that the “numbers might have been much smaller” if “DNA testing been around while I was growing up.” He said that there was no interest about finding out if his children are biologically related to him because “legacy has nothing to do with blood.”

To further support his claims that he has 47 children, McAfee uploaded a photo of his son in December 2018 on the beach on his Twitter account. “Happy Birthday to my son [and wife Janice McAfee] Elijah,” he tweeted. “…Elijah is not one of my 47 children who carry my genes, but my love for him is no less.”

Twitter users were skeptical about McAfee’s claims, but he stood by his tweets. As of writing, it remains to be seen whether McAfee does have 47 biological children, but perhaps they’ll make themselves known in the aftermath of his death.

06/23/2021 Celebrities Comments Off on How Many Kids Did John McAfee Really Have?
Recent Posts