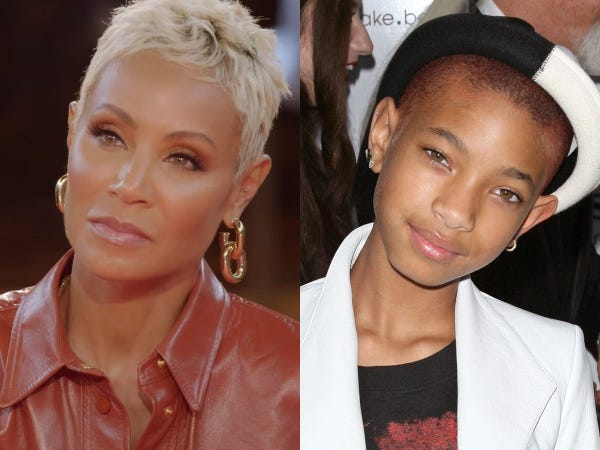 Jada Pinkett Smith opened up about being "hardcore" mom-shamed for the first time when Willow Smith cut her hair off in early 2012.

"Over the years, I have had my fair share of mom-shaming," Pinkett Smith said on the latest episode of her Facebook Watch series, "Red Table Talk," which she cohosts with her daughter and her mother Adrienne Banfield-Norris.

"With Willow, I think the first time I got hardcore criticism [was] when you first cut your hair," the actress recalled. "There was a firestorm."

Willow, who was 11 at the time, agreed, saying that the backlash at the time was "constant."

The "Girls Trip" star went on to say that seeing Willow's reaction after she cut her hair off helped her cope with the criticism she and husband Will Smith received for their parenting styles.

"For me, looking at how my children were being affected, that's what counted," Pinkett Smith said.

She continued: "If they could have seen this child's expression of freedom looking at her hair falling to the ground … me as a mom, looking at that, experiencing that with her, there is nothing that anyone could say to me to tell me that it was wrong. Not one person, because I was there."

"I was looking at her. I saw her face. I knew the journey that she and I took together to get to that point," the actress added. "So it didn't really matter what anybody said."

The Smith family addressed Willow's haircut during a previous episode of "RTT," released back in June.

In the episode, Will said his strict parenting style pushed Willow to her limit following the success of her 2010 song, "Whip My Hair."

The double-platinum track resulted in live performances, a record deal with Jay-Z's Roc Nation, and a tour with Justin Bieber. Will said that he and Willow had a disagreement when she told him that she didn't want to continue the tour because she didn't feel like it, despite making a commitment. So in an act of defiance, she shaved her head.

"It was so devastating to me when she shaved her head bald," Will said, adding that it felt like a "protest against me" and "a sign from the gods" that she didn't want to adhere to his rules.

In an interview with InStyle, Willow recalled being turned off to the industry after the popularity of "Whip My Hair."

"I was just over it; I was literally so done and said, 'I'm going to show people that I'm not attached to this,'" she told the magazine.

Willow would go on to continue her career in Hollywood on her own terms. She released her debut album in 2015 titled "Ardipithecus," followed by two more albums: "The 1st" (2017) and "Willow" (2019). In 2020, she released a joint album with Tyler Cole titled "The Anxiety."

It wouldn't be the last time Willow shaved her head. She did it again earlier this year after concluding a 24-hour exhibit with Cole, which was tied to the release of their album.

10/13/2020 Celebrities Comments Off on Jada Pinkett Smith says she was ‘hardcore’ mom-shamed when Willow shaved her head at 11 years old
Recent Posts
We and our partners use cookies on this site to improve our service, perform analytics, personalize advertising, measure advertising performance, and remember website preferences.Ok