Buoy band on the crest of a wave: KATE MUIR reviews Fisherman’s Friends – One And All

Fisherman’s Friends: One And All brings the corny back to Cornwall in an enjoyable, sea-shanty-fuelled film based on the true story of a group of folk singers.

The first musical comedy in 2019 featured the journey of the Fisherman’s Friends from their home village of Port Isaac to top-ten international fame. This second instalment is less about ‘hoo-ray and up she rises’ and more about ‘what shall we do with the drunken sailor?’ 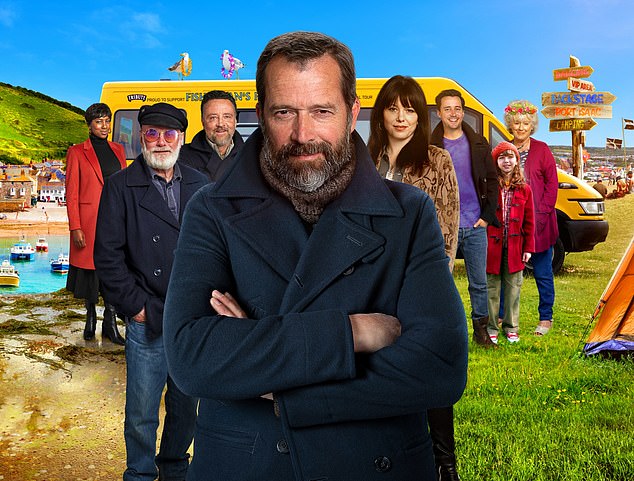 Fisherman’s Friends: One And All brings the corny back to Cornwall in an enjoyable, sea-shanty-fuelled film based on the true story of a group of folk singers

That’s James Purefoy, who once again plays Jim, the gruff, charismatic leader of the singers. Jim drowns his sorrows on a regular basis, traumatised by the death of his lobster-fisherman father Jago (David Hayman) who formed the original band.

The rest of the Fishermen are also struggling with fame on tour. We see a rumbustious night at the Grimsby Docks Social Club where one of the older singers asks a female journalist whether she likes ‘meat in her pasty’ and gets a glass of wine in his face.

Meanwhile, Rowan (Sam Swainsbury), the handsome married barman from the village, is almost suffocated by ladies in pink at a Northern hen night. 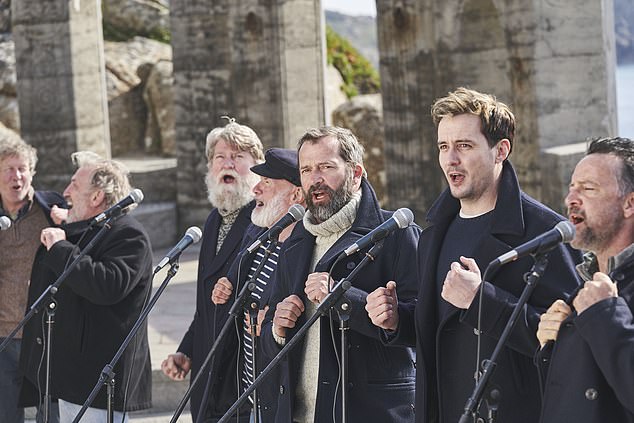 It’s all rollicking entertainment and the soundtrack milks the traditional songs for emotional power, too, as Jim and Rowan battle with their demons

Witness for the Prosecution (1957)

But the star turn is Marlene Dietrich as the titular witness.

Thus the oldest and most politically incorrect ‘buoy band’ in the charts find themselves in trouble and are sent for ‘media training’ by their record company before the launch of their second album. Much fun is made of the contrast of metro versus retro when the music executives visit from London.

There is also a search for a new band member — who turns out to be more of a farmer than a fisherman, to Jim’s disgust.

It’s all rollicking entertainment and the soundtrack milks the traditional songs for emotional power, too, as Jim and Rowan battle with their demons — and have to dress up as giant fish fingers for an advert. Will the band ever get back on track?

From a silly start, the story manages to find surprising emotional depth with Jim’s struggle with alcohol, grief and commercial exploitation. He meets another singer who turns up at his mum’s B&B, a mysterious Irishwoman called Aubrey (Imelda May), who is also on the run from her past.

No spoilers here, but they do spar over a couple of scones and clotted cream, with Jim revealing that in Cornwall the strawberry jam goes on the scone first, followed by a dollop of cream (in Devon it’s the opposite, apparently).

Of course, the biggest character on screen is Cornwall itself, with breathtaking shots of cliffs above turquoise sea, and the charming nooks of Port Isaac.

The choir belts out: ‘For this is my Eden, and I’m not alone/ For this is my Cornwall and this is my home.’ Surely a karaoke version of the film must be in the works?

There could not be a greater contrast with I Came By, a grim urban tale about radical graffiti artists who tag the homes of the rich in London. They meet their match in the form of a distinguished judge, played by Hugh Bonneville.

Bonneville’s character, Sir Hector Blake, is leaner and meaner than Lord Grantham in Downton Abbey and makes your skin crawl when he seems to be grooming a young male asylum-seeker with the offer of a G&T at his magnificent house. 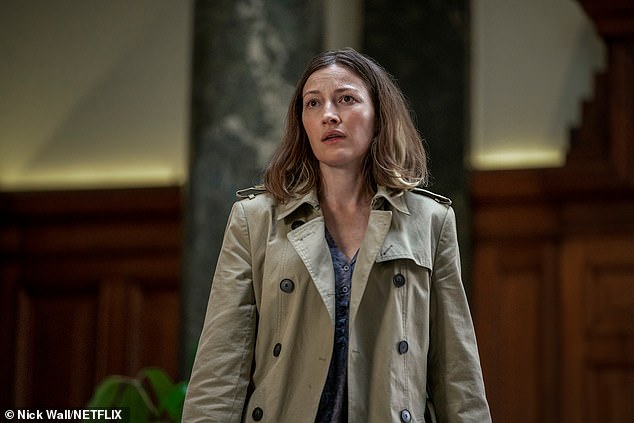 I Came By is a grim urban tale about radical graffiti artists who tag the homes of the rich in London. Pictured: Kelly Macdonald as Liz in I Came By

The graffiti artists are Toby (George MacKay) and his friend Jay (Percelle Ascott) and their invasion of the judge’s home plunges them into an underworld of perversion and privilege.

Unfortunately, the script ticks every cliché along the way, and it wasn’t hard to guess the next line each time. The street slang is also unconvincing (‘You know da feds have me on their radar and I’ll have to go back in da pen,’ says Jay at one point).

Kelly Macdonald does her best, as always, as Liz, Toby’s mother, sick with worry at his erratic behaviour; and Bonneville is clearly enjoying his stroll on the dark side.

The film was co-written and directed by British-Iranian Babak Anvari, whose previous films have gone in for the gruesome, but I Came By seems to have been sanitised for its Netflix audience.

All the chain-sawing and clubbing is off-screen, and the most dangerous weapon we see is a cricket bat. This is a horror movie with the horror gone AWOL.

Fisherman’s Friends: One And All is in cinemas from today. I Came By is in some cinemas now and on Netflix from August 31.

Well, I guess that’s one way to resit your exams…

My Old School is a gobsmacking impostor story, as amusing as it is barely conceivable.

The documentary, in cinemas now, investigates how a 30-year-old man, Brandon Lee, passed himself off as a 17-year-old schoolboy and returned to take his Higher exams at Bearsden Academy in Glasgow.

The news story was in 1993 but now director Jono McLeod, who was one of Lee’s 16-year-old classmates at the time, gives the inside view.

McLeod interviews his old friends, now middle-aged and full of dry wit, about how they and the teachers were duped. No one seems to hold a grudge, however, against the geeky, swotty Lee. 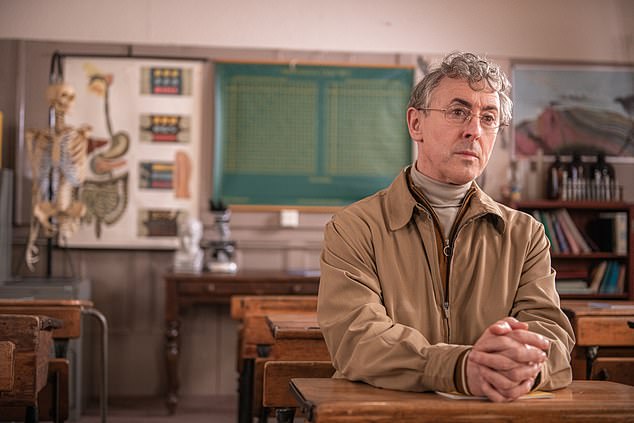 The film has further twists, but after getting five A-grade Highers and starring as the romantic lead in the school musical (South Pacific), Lee went off to study medicine at Dundee, where his double life was revealed by a newspaper.

His real name was Brian MacKinnon. In the words of Mr Gunn, the physics teacher: ‘He wasn’t quite the fresh-faced youth we thought.’

There’s a fictional impostor story in cinemas this week, too:

But what the audience knows straightaway is that Esther is in fact a 31-year-old Estonian psychopath with a form of dwarfism that allows her to pass herself off as a kid. 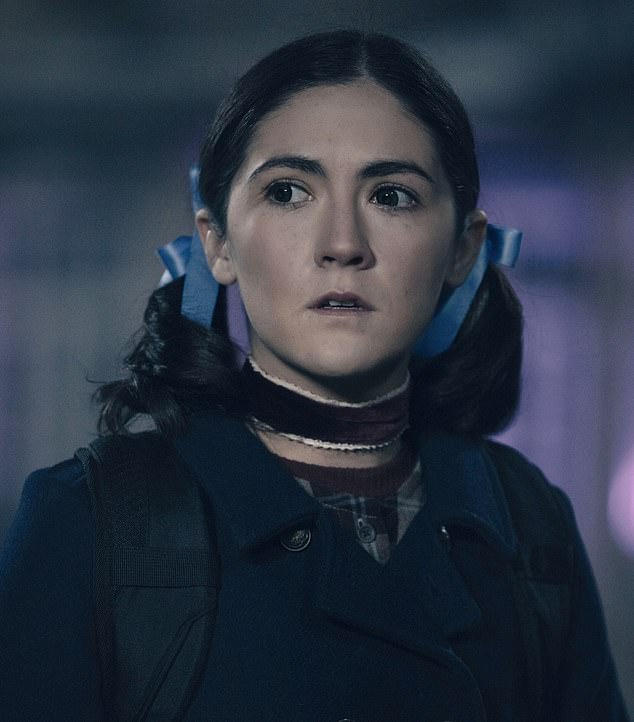 This makes the entire horror film unintentionally hilarious, with the added joy of a nutso performance by Julia Stiles.

If you fancy a nostalgic Trekkiefest, the 1979 blockbuster Star Trek: The Motion Picture is re-released in cinemas from today.

It moves at a glacial pace, the special effects are Lego-like and the costumes reminiscent of big beige Babygros.

But on the plus side, the original TV cast is back: William Shatner as Captain Kirk, Leonard Nimoy as Spock and Nichelle Nichols as Lieutenant Uhura. A guilty pleasure. 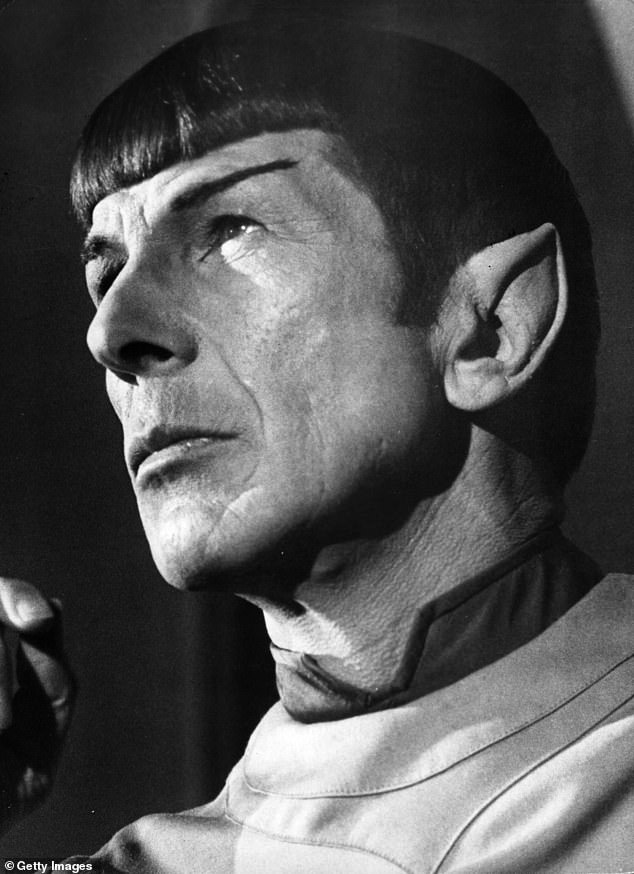 The 1979 blockbuster Star Trek: The Motion Picture is re-released in cinemas from today. Pictured: Leonard Nimoy as Mr Spock in 1979