Kourtney Kardashian is unfazed by shady social media comments. The TV personality, 42, shared photos with two of her three children Penelope, 9, and Reign, 6, during a trip to Cabo San Lucas on Instagram on Nov. 17. The trio could be seen horseback riding on a scenic beach at sunset. When a follower remarked that she was “finally” with her children, Kourtney had a pointed response.

“I’m with my kids every day thank God,” the Poosh founder replied to a comment that read “oh wow you’re with your kids finally????” Kourtney added that “social media isn’t always real life.” The former Keeping Up With the Kardashians star shares her three children, including son Mason, 11, with ex-boyfriend Scott Disick. 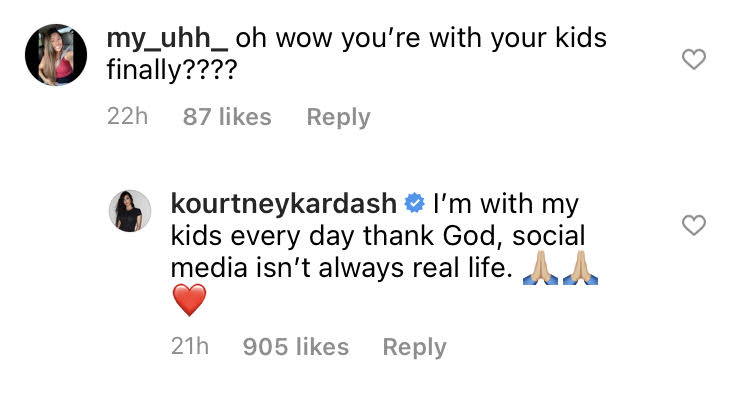 Kourtney recently got engaged to musician Travis Barker in October after about a year of dating and a longtime friendship. The Blink-182 drummer, 46, proposed on a beach in Montecito, California. The nuptials will mark Kourtney’s first marriage, and Travis’ third: he was previously married to Melissa Kennedy and Shanna Moakler. He shares kids Landon, 18, and Alabama, 15, with the latter.

His teen children and much of the Kardashian family, including Kim and Khloé, were there for the proposal. A source previously told HollywoodLife that the Kardashians, especially Kourtney’s three children, were thrilled about the engagement. “The kids are super happy about this, as is Kourtney’s entire family,” the source said. “They adore Travis and they love their blended family.”

Matriarch Kris Jenner recently revealed that Travis asked for her blessing ahead of proposing while on the Halloween episode of The Ellen DeGeneres Show last month. The 66-year-old momager called the gesture “sweet” and said her daughter and her fiancé are a perfect match. “They’re really made for each other,” Kris said. “They really are. They’re the cutest couple. They’re so in love.”

She joked about the couple’s well documented PDA, “And, you know, they let us know they’re so in love, constantly.” When asked about how it felt to be at the center of the PDA, Kris said, “You feel, you know, like they’re the only two people in the room, and we almost don’t know what to do with ourselves. I’m looking for a closet to hide in and somewhere to go.”