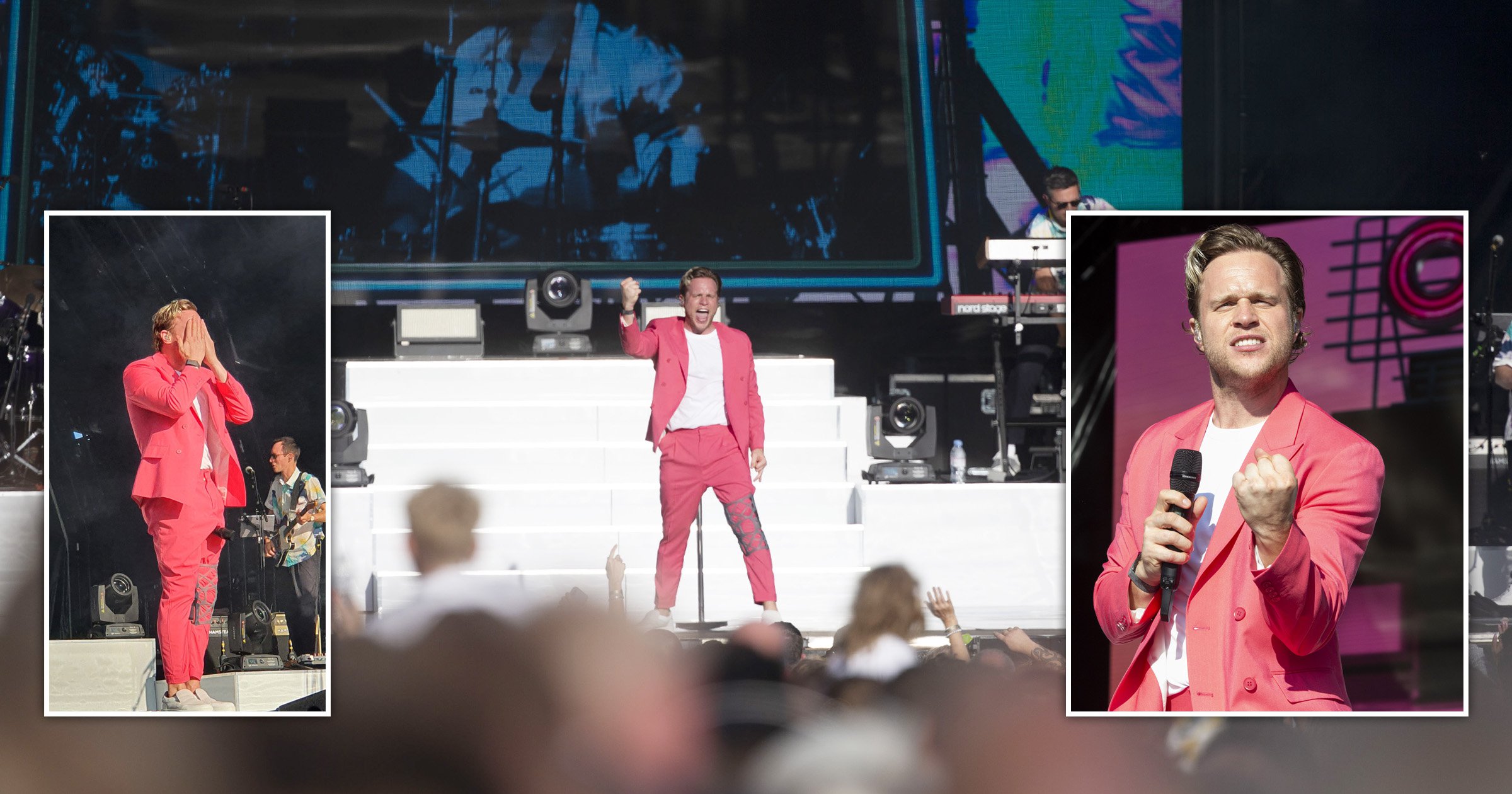 Olly Murs returned to performing for the first time since his leg surgery this weekend but he only wound up with another injury.

The Heart On My Sleeve singer hit the stage at Newbury Racecourse on Saturday afternoon to delight fans with his collection of hits.

It came just 11 days after Olly, 37, underwent an operation on his leg due to a bone fragment lodging itself in the back of his knee during a performance, leaving him unable to walk properly.

As he returned to the spotlight yesterday, the singer suffered another on-stage blunder after a fan threw a bottle of sunscreen at him from the audience.

Reading comments about the show in an Instagram Live post-event, Olly laughed: ‘The sun cream was not a good idea half way through the gig.

‘Thanks to the person who threw it at me, my eyes are still stinging from that. Everything is sweet with me.’

Another fan tweeted a photo of Olly rubbing his face on-stage, presumably after being hit with the bottle or using the suncream, and commented: ‘U ok hun?’ to which he replied with several cry laughing emoji.

Reflecting on the performance, he added in the Instagram Live: ‘The gig was amazing. To be honest with you, it felt better than I thought. I was trying to be a bit cautious on stage.’

The Dance With Me Tonight singer looked electric as he graced the stage in a salmon pink suit, white T-shirt and trainers. He was able to move about the stage with the help of a leg brace over his left knee.

Olly revealed he had been hospitalised with his injury earlier in August and filmed an update for fans from his hospital bed.

He said: ‘Hey everone what’s happening. Probably thinking, “What is going on, why is Olly in a hospital bed?” Well I’ve just had surgery on my left leg.

‘As you can see I got my Game Ready on already to ice it. Basically, for some of you that came to the Newmarket gig on Friday, thank you firstly for all your kind messages and support and just checking I was okay.

‘It’s been a mad 72 hours since the gig, getting to this point. Basically after my second song a fragment of bone that was in my knee, after I jumped, managed to lodge itself on the back of my knee which basically shut my leg down, and during the gig I was just limping the whole time. Couldn’t believe it.