Piers Morgan, 54, has been married to journalist Celia Walden, 44, for over nine years after the pair tied the knot in 2010. The Good Morning Britain host has since been mocked by his own wife as she branded him an “old man” after sharing a doctored image of the television star.

In view of her 12,800 Instagram followers, Celia shared a snap of herself wearing a two-piece bikini as the pair held each other.

As she leaned in to kiss him on the cheek, Piers could be seen sporting a full head of white hair and a beard.

She captioned the post: “They told me I’d wake up married to an old man one day. I just thought we had more time #happy2020 #wheredidthetimego #primarycaregiver.”

Fans and celebrity pals alike rushed to comment on the altered image as many people questioned if that was the GMB host. 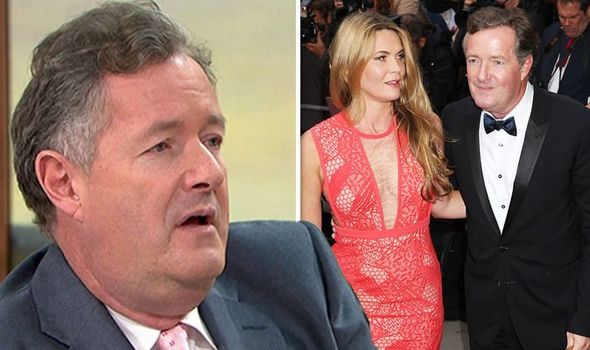 Celia kept up the joke by replying: “I know… Time has not been kind.”

While a third person quipped: “I’d take @piersmorgan of your hands anytime.”

Piers and Celia have a 10-year age gap and are parents to their daughter Elise, eight.

It is the small-screen star’s second marriage as he was previously married to Marion Shalloe, the mother of his four sons but the former subsequently divorced in 2008.

The ITV favourite is currently on a break from his hosting duties at Good Morning Britain and has been making the most of his time off.

Piers and Celia brought in the New Year at a luxury resort in Antigua.

The couple jetted off to the Caribbean after Christmas for a sunny holiday with their little girl.

The GMB favourite has been documenting his travels abroad with a series of photos uploaded to his Instagram account.

In another photo, Piers captured a stunning rainbow but joked his wife had “ruined the view”.

He captioned the post: “Jeez, you finally get to see a rare (very lucky!) double rainbow – and the wife jumps in to ruin the view. @carlisle_bay_antigua @inspiringtravelco.”

Fans rushed to comment, as one person said: “Photoshop her out.”

Another person commented: “Morgan, she’s your gold at the end of the rainbow.”

While a third person added: “Lovely pic. I was beginning to wonder if you had a wife. Enjoy hols.”(sic)

Related posts:
01/01/2020 Celebrities Comments Off on Piers Morgan: GMB host’s wife Celia Walden mocks husband as she brands him an ‘old man’
Recent Posts
We and our partners use cookies on this site to improve our service, perform analytics, personalize advertising, measure advertising performance, and remember website preferences.Ok