The summer’s not going to go by without new music from Selena Gomez. She teamed up with Camilo for the Spanish-language ‘999’ and it’s so good.

Though it seems Selena Gomez has been focused on her acting career, the Only Murders in the Building star took a moment on Friday (Aug. 27) to give fans of her music a little gift. While teaming with Colombian singer-producer Camilo, Selena, 29, took it to a new level – level “999,” to be precise. In the new song and video, she rocks a bunch of different hairstyles and plays in a field with flowers — it’s truly mesmerizing. Watch the full video above.

Selena first teased the new track on Aug. 23. “1,000 yo sé que piensas en mí y el corazón se te mueve…si tú quieres ir a 1000…” she tweeted, which roughly translates to, “1,000 I know you think of me and your heart moves … if you want to go to 1,000 …” Shortly afterward, she released the presave link to her new song. On the following day, she tweeted, “Yo sé que piensas en mi, y el corazón se te mueve / I know that you think of me, and your heart moves.” On Aug. 25, she shared a trippy snippet of the music video, one that depicted her with a variety of new hair colors and styles. From the blue-grey locks that fell past her shoulders to the daffodil-yellow bob to the curly purple waves, there was a dash of psychedelia in this Latin pop.

“999” marks Selena’s first music since her Revelación EP. The Spanish-language project arrived in March 2021 and contained the singles “De Una Vez,” “Baila Conmigo,” and “Selfish Love.” The first two found their way onto the Billboard Hot 100, hitting #92 and #74, respectively, while “Selfish Love” (with DJ Snake) reached No. 5 at the Bubbling Under Hot 100 chart. Revelación arrived to fairly positive reviews, with Rolling Stone saying Selena’s “ASMR-ready voice is more alluring in Spanish and she plays that to her strength” and that the EP indicated that Selena en español “is a revelation worth revisiting on a full-length project.” 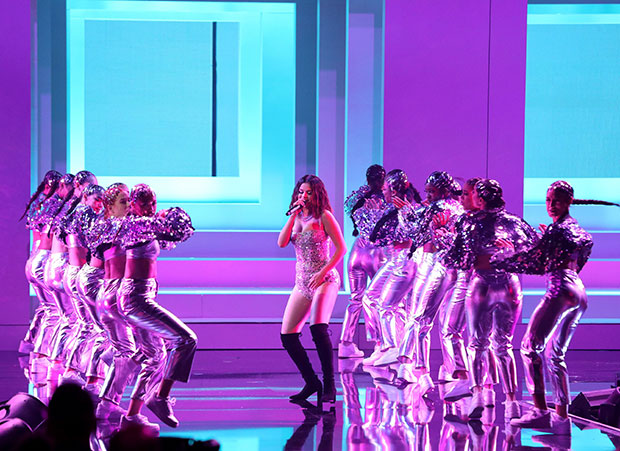 In May, months after she hinted she might retire from music, Selena teased a new album was in the works. She posted a shot of her wearing some homemade jewelry, and her bracelet bore the characters “SG3.” This suggested that Selena Gomez was working on her third album – which would be confusing since her 2020 album, Rare, is the third album she released as a solo artist. However, as some fans pointed out, 2013’s Stars Dance was released on Hollywood Records, a label within the Disney Music Group. Selena’s solo debut came after three albums as part of Selena Gomez & The Scene (whose music was also released on Hollywood Records). So, one could interpret the former Wizards of Waverly Place star’s jewelry as her saying Stars Dance doesn’t count.

Selena had to actually walk back some comments she made about her tenure with the House of Mouse. During a TCA panel in early August, Selena — who had a recurring role on Hannah Montana before landing the Wizards role – joked that she “signed my life away to Disney at a very young age, so I didn’t know exactly what I was doing. I was a kid. I didn’t know what I was doing, I was just running around on set, and now I feel like a sponge, and I soak up all the wisdom that I can.”

At the end of the month, while doing press for  Only Murders in the Building, Selena said she was “beyond proud” of her younger work, and it “kind of shaped who I am, in a way.”