Tim Tebow is giving fans an intimate look at his married life at home with Demi-Leigh Tebow.

The former NFL star and his wife exclusively invited ET inside their Jacksonville, Florida, abode for a candid discussion on everything from the upcoming Super Bowl to how they celebrated one year of marriage and whether they could see themselves having children someday. Tim, 33, and Demi-Leigh, 25, tied the knot in a stunning sunset ceremony in South Africa on Jan. 20, 2020.

“The night before our one-year anniversary, Tim gave me the most beautiful bunch of flowers. Twelve roses and one peony, my favorite flower,” Demi-Leigh shared. “He said that it was a rose for each month we have been married, and one peony representing one of me, who he loves. I thought that was so beautiful and I just felt so loved by that kind gesture.”

“The next morning, when I woke up and came downstairs to make a cup of coffee, there was a bunch of 365 roses,” she continued. “They represented each day of marriage — the good ones, the great ones, the trial ones, the unexpected days, just all of them. I think it’s really special to be able celebrate all of that in marriage.”

Due to various work projects and concerns over COVID-19, Tim and Demi-Leigh were unable to travel anywhere extra special for the occasion, but told ET they did take a couple of days off to celebrate on the beach.

“She loves the beach, because it reminds her of home,” the former Florida Gators football star said of his wife, who was born in Sedgefield, South Africa. “So that was special, to be able to have a little bit of time to work that in … to connect and have that celebration with just us.”

Demi-Leigh added they’ve also been able to find joy in each other every day throughout their first year of marriage, especially because they had to experience it amid a pandemic.

“Even being in quarantine for a long time, we still really try to continue dating each other and continue being intentional about our time together,” she explained. “I think it’s so important not to just focus on one day or one date, but [every day] throughout the relationship.”

Tim and Demi-Leigh also reflected on their early days of dating, revealing who said I love you first — “It was me, it just slipped out!” the former Miss Universe beauty queen gushed — and their first impressions of each other.

“I could not breathe,” Tim recalled of seeing Demi-Leigh for the first time. “And if we’re being honest, on our actual real first date, I told her it was definitely my last first date.”

“I felt the same way,” added Demi-Leigh. “I didn’t watch football or baseball, so I knew Tim as the Knight in Shining [Armor] guy. I got to know him as someone who stands so firmly in what he believes in and that is so bold, is fighting for people who cannot fight for themselves. Having had a sister with severe special needs, that was something that really impacted me and drew me to him instantly. It’s one of the things that made me fall in love with him first.”

If you follow the couple on Instagram, then you probably already know that their love for each other also resonates with “The Tebow Pack,” aka their three social media famous dogs who just turned 1 — Paris the Dalmatian, Kobe the golden retriever, and Chunk the Bernese mountain dog.

“We love them so much,” Tim said of his own dogs. “When we watch them or look at them or play with them, we can’t help but love them.”

“We’re definitely biased, but it’s sweet to see how much joy they’re able to bring through social media,” added Demi-Leigh. “I did not expect our dogs to have over 80,000 followers at all, never! But it just kind of happened. They each have such unique personalities and that’s what we try to embrace about them.”

The Tebows recently teamed up with their new partners, I and Love and You, to put together their favorite natural, healthy and grain-free dog food and treats. All are included in the first-ever “Tebow Pack Bundle,” available at iandloveandyou.com.

“We just got to connect and have a lot of conversations,” Tim said of how the partnership came to be. “[We] have similar hearts and want to be able to give back. They really have big hearts for making a difference, and I think that was very intriguing for us.”

“They really do, and I think for any partnership, it’s so important to have the same values,” added Demi-Leigh. “That’s definitely very important in every way, from the way they manufacture and produce their food to their company values.”

With the new partnership, Tim and Demi-Leigh will also continue to do a number of charitable initiatives ranging from supporting therapy dogs to donating money and products to our nation’s best service and working dogs.

Tim and Demi-Leigh admitted that they certainly have their hands full with their three 1-year-old fur babies at the moment, but told ET they’d be open to having children “at some point” in the future.

“I think it’s certainly a heart’s desire for both of us,” Demi-Leigh said. “And God willing, we would love to have a family someday, one day.”

“Someday,” added Tim. “That would be an awesome blessing that we would love.”

For now, the two are celebrating every achievement that comes their way, including the exciting release of Tim’s new children’s book, Bronco and Friends: A Party to Remember. The book, inspired by his late dog, Bronco, encourages children to embrace their unique qualities. 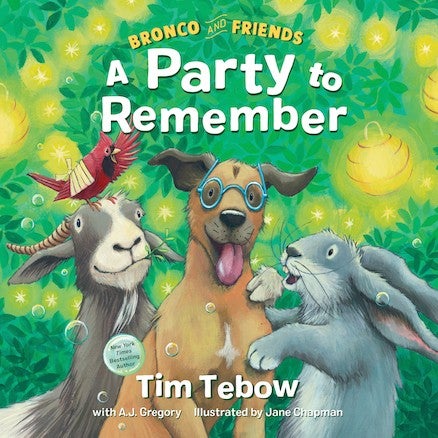 “Bronco and Friends is a children’s book that’s so near and dear to my heart,” Tim explained. “Bronco was an amazing dog that passed away last fall. It was a way to honor him.”

“We’ve gotten dozens and dozens of stories of how it’s encouraged children and families about their abilities and their disabilities,” he continued. “We want every single person to understand their worth and their value; that they’re unique and that they’re special and that they’re wonderful.”

Before we let the lovebirds go, we also had to ask Tim one burning question on all sports fans’ minds right now: When Super Bowl LV kicks off in Tampa this weekend, will he be rooting for Tom Brady and the Tampa Bay Buccaneers, or Patrick Mahomes and the Kansas City Chiefs?

“It’s so hard to pick against Tom Brady, but the Chiefs are so good, so I’ll probably pick the Chiefs for who will win,” replied Tim, who formerly played for the Denver Broncos and New York Jets. “But I think any team that Tom is on, especially with the defense and all of the weapons, I think they have a great shot.”

“A lot of times, the AFC and the NFC championship games are better games than the Super Bowl, but I think this Super Bowl is going to be a really good game,” he continued. “I think the Chiefs have, overall, a little bit more talent, but I think the Bucs are going to have a great game playing. And Tom Brady, you can’t count him out. He’s always got a shot! So it’ll be really fun. I’m excited to watch.”

Super Bowl LV airs live on CBS and CBS All Access on Sunday, Feb. 7. Kickoff is at 6:30 p.m. ET. Additionally, you can also stream the game for free on CBSSports.com and on the CBS Sports app on your mobile device. In the meantime, stay tuned right here to ETonline.com for more exclusive Super Bowl coverage coming your way before game day!