After the Tampa Bay Buccaneers had a huge win over the Miami Dolphins, Tom Brady shared a sweet father-son moment with son Jack. The QB said it was the ‘best part’ of his day.

Tom Brady, 44, always makes time for his kids. After he helped the Buccaneers beat the Miami Dolphins 45-17 at Raymond James Stadium on October 10, Tom was spotted walking with his 14-year-old son, Jack, back to the locker room. The Buccaneers’ official Instagram page posted the video and wrote, “Father son moment.”

Jack was wearing a replica of his father’s jersey. The 14-year-old is getting nearly as tall as his dad! In just a few short years, Jack may surpass Tom’s 6′ 4″ height! The father and son even have the same walk. Tom reposted the video on his Instagram Story and wrote, “Best part of my day.”

Earlier in the summer, Jack worked for the Bucs as a ball boy. “He takes his summer job and every rep very seriously,” Tom wrote on his Instagram Story in August 2021. “Just like his dad.”

“Happy 14th birthday Jack! I am so proud of the young man you are,” Tom wrote. “You always try your best, you put others first, and you bring so much joy to our lives. This picture brings back some special memories and I can’t wait to kick your butt on the golf course again soon! We love you sssooooo much!!!” 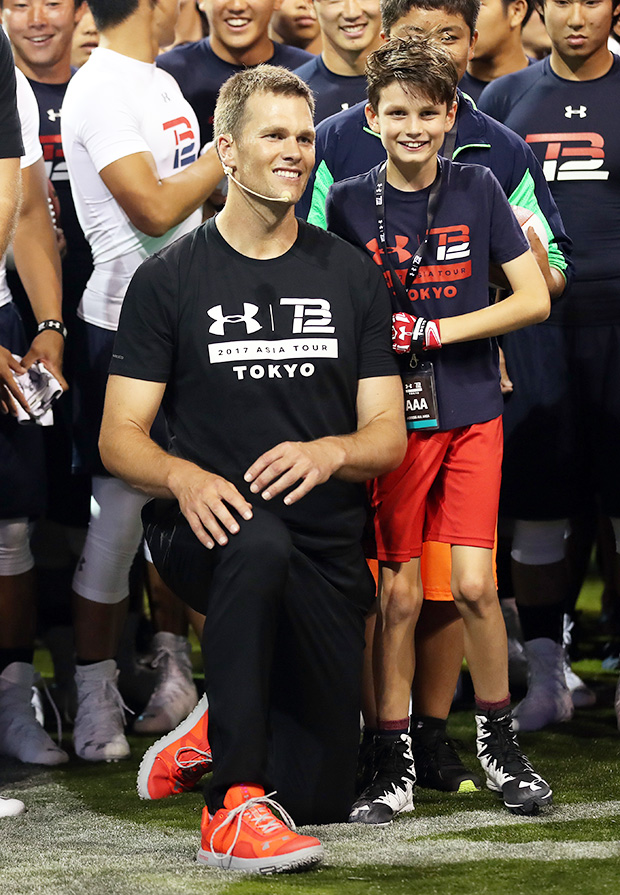 This year marks Tom’s 22nd NFL season. He recently revealed that he doesn’t know when exactly he’ll retire. The quarterback signed an extension with the Bucs to play through the 2022 season. “Beyond that, I don’t know,” he told the WSJ. Magazine. “Maybe it’s another year after that; maybe it’s two. I’ll have to see where I’m at with my family. That’s probably the overriding factor—what I’m missing out on.” Tom also has two kids with wife Gisele Bundchen: Benjamin, 11, and Vivian, 8.