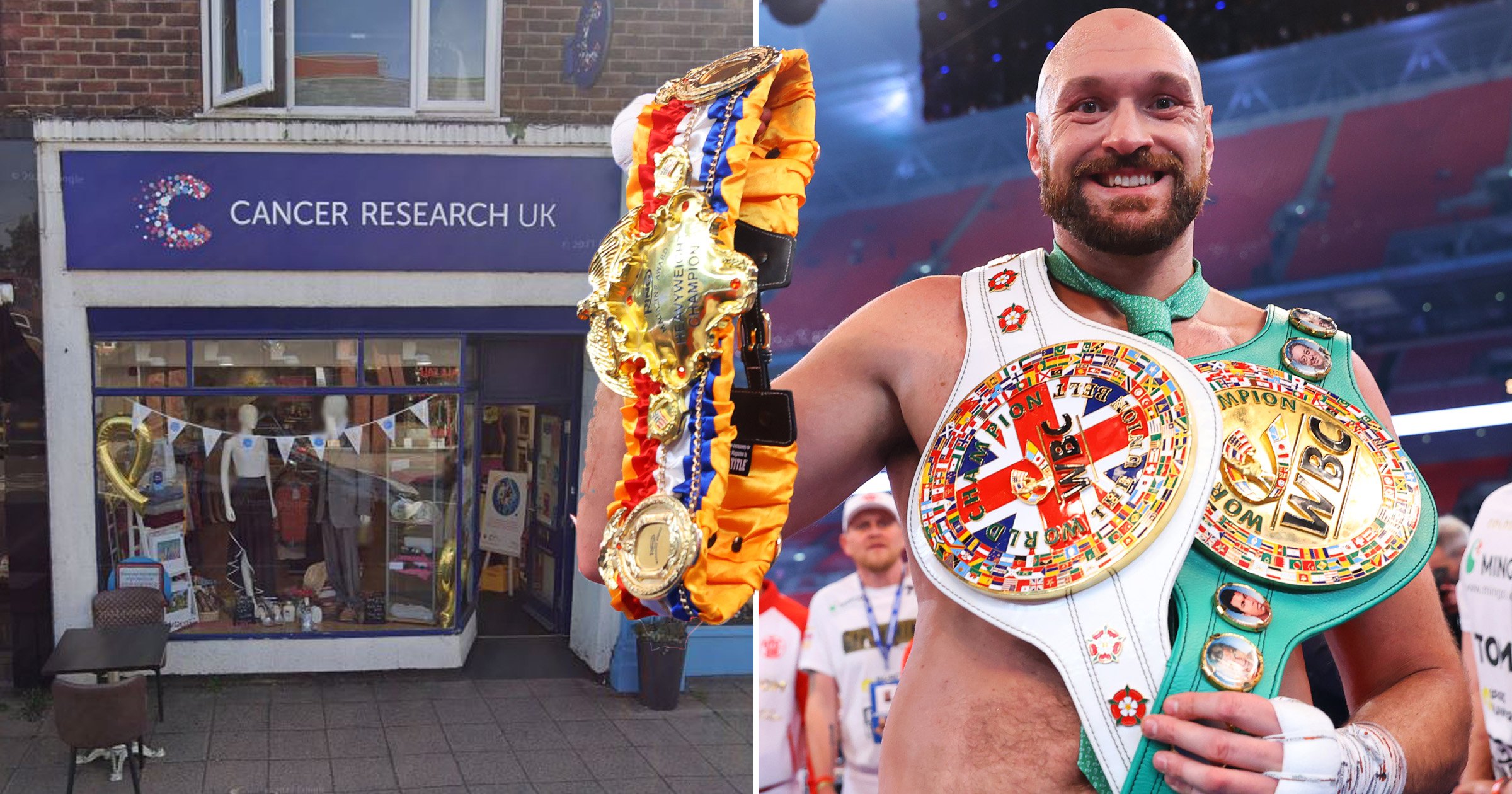 Tyson Fury may have won £26million in his recent big fight, but he’s remaining humble and isn’t afraid to spend his coins in charity shops.

The professional boxer, 33, reigned supreme last Saturday when he came out on top in a knockout victory against Dillian Whyte.

Tyson – who is considered one of the greatest heavyweights of all time – retained his WBC heavyweight title with a brutal knockout of his opponent at Wembley Stadium in London.

He scored a mega prize which he’s now spending, after the sport star was spotted at a Cancer Research store in Wilmslow, Cheshire.

Tyson was all smiles, waving to photographers as he left and also posing for a pic with one excited fan inside the shop.

He left with a bargain pair of sunnies, despite boasting an impressive collection of Versace sunglasses already and often wearing designer clobber.

In May last year, the whole Fury fam made headlines following a pic of them all wearing Versace outfits, basically looking like a walking ad for the brand.

Clearly not afraid to splash the cash, the Furys donned Versace shirts, shorts and tees for a family snap that belongs on the mantlepiece.

One member of the public couldn’t speak more highly of Tyson after seeing the boxer browsing the charity shop.

She praised him for being ‘down to Earth’ and staying true to his roots, despite his international success.

‘He was very relaxed and seemed so happy to be there. He was asking the staff about their work and posing for pics with anyone who’d ask,’ they told The Sun.

‘It’s mad that someone so wealthy would want to come to a charity shop. It just shows how down to Earth and what a nice, honest bloke Tyson is.’

His charity shop outing comes just after Tyson told Piers Morgan on his TalkTV Uncensored show that he doesn’t fight for money and would choose to retire over a £100m super-fight against Anthony Joshua.

He admitted: ‘It’s not about money for me. A lot of people in this world, everything is about money, and more money.

‘I’ve got enough of everything I need. I’m a very simple man. I drive an 07 VW Passat. I don’t need tons of money to impress everybody.’

The Gypsy King added that so long as he’s ‘happy’, ‘healthy’, and surrounded by his family, he regards himself as successful.

‘I’ve got a beautiful wife, I’ve got six kids. I’ve got umpteen belts, I’ve got plenty of money, success, fame, glory,’ he said.

It seems Tyson practises what he preaches, as just days after his widely walked about fight at Wembley, he was putting his bins out at his £1.7m property in Morecambe, clearly never shy about getting his hands dirty.

Also, reports of him retiring aren’t new, with rumours surfacing before his battle against Whyte two weeks ago.

Rumours of Tyson retiring also came alongside pregnancy rumours for his wife Paris Fury, with pal Carl Froch letting slip on BBC Breakfast that the couple are supposedly expanding their brood.

Carl suggested Tyson might be retiring as he wants more family time, despite Paris later conceding he may still go for a unification fight.

With Tyson referencing his ‘six kids’ in his chat with Piers recently, he is yet to comment on speculation that his wife is expecting their seventh child.

Tyson and Paris – who have been together for over 15 years – already have two daughters, Venezuela and Valencia Amber, and three sons called Prince John James, Prince Tyson Fury II and Prince Adonis Amaziah.