“Our journalists were just doing their jobs and should never have been arrested in the first place,” Post tells TheWrap 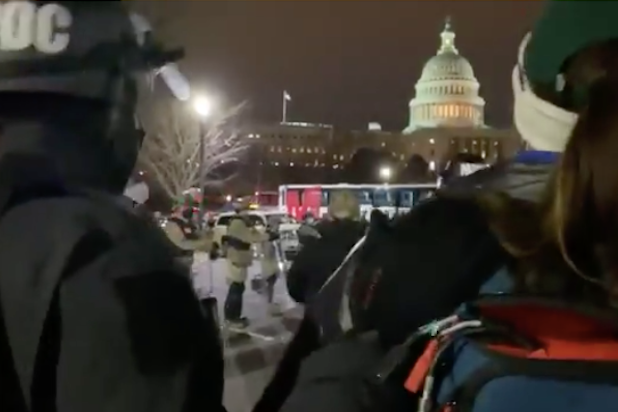 Two Washington Post video journalists tweeted on Wednesday night that they’d been arrested during the unrest at the U.S. Capitol, where a riot by President Donald Trump’s supporters in the afternoon left one woman dead.

“Some days are like this. Body armor, helmet, getting arrested while filming a siege on the Capitol,” Zoeann Murphy tweeted, attaching a video of herself walking ahead of a uniformed officer.

The second video journalist, Whitney Leaming, retweeted another of Murphy’s tweets that included a video and said, “With @wleaming, still rolling the camera while we were being arrested for filming protests outside the Capitol.”

Following the unprecedented and violent events of Wednesday afternoon, a 6 p.m. ET curfew was put into effect in the nation’s capital. Members of the media, per the curfew, were said to be exempt.

“Our journalists were just doing their jobs and should never have been arrested in the first place,” a spokesperson for the Washington Post said in a statement to TheWrap. “However, we’re pleased that police quickly released them.”

A spokesperson for the Metropolitan Police Department did not immediately return a request for comment on the matter.

Observers on Twitter, however, had much to say after Murphy posted her videos.

Angela Perez, a press assistant for President-elect Joe Biden, tweeted, “so we’re arresting journalists and not the insurgents who attacked the capitol? make it make sense.”

Another Twitter user mused, “Domestic terrorists who stormed the Capitol not arrested, but members of the press are arrested tonight. Maybe, just maybe, it is time for police reform.”

Murphy replied to a colleague who expressed concern online, saying she was “totally ok.”

“They let us go quickly,” she added.

Chaos erupted at the Capitol during a joint session of Congress during which elected officials were expected to certify Biden’s election win. Numerous Republican lawmakers declared their intention to object before the confirmation, aligning themselves with Trump, who has falsely claimed since November that the Democratic party’s win is attributable to widespread election fraud. Protesters, encouraged by Trump for days, descended on the city to protest the certification. Some eventually broke into the building, resulting in a lockdown and a delay in the process.

01/07/2021 Celebrities Comments Off on Washington Post Journalists Say They Were Arrested at Capitol
Recent Posts
We and our partners use cookies on this site to improve our service, perform analytics, personalize advertising, measure advertising performance, and remember website preferences.Ok