A BRIDE has shared the bizarre photos from her big day that see her mother-in-law clutching the groom’s hand.

The mother-of-the-groom can be seen completely blocking out the bride in the “creepy” photograph. 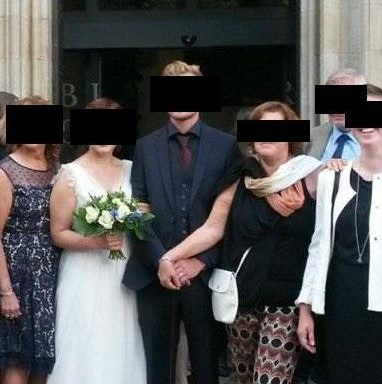 It was shared on Reddit by the anonymous bride who shared further disturbing details about her now mother-in-law.

Under the username acciopintje she wrote: “She (mother of the groom) went with him when he got his suit fitted.

“Afterwards, she sent me a long fb message detailing how handsome he looked and how she was ‘falling in love all over again.’

She added: “There are photos where she WAS in-between us.

“Her daughter asked her to move, so my husband and I could stand together, and her actual response, I swear to you all, was a sharp, ‘I can stand here! I'm his woman, too!’”

The bride also described how her mother-in-law went on to discourage her from wearing blue shoes on her wedding day as well as sleeping on the couple’s sofa on their wedding night.

Other Redditors were quick to point out that she had also appeared to have chosen a casual ensemble for her son’s big day.

The bride responded: “I tried to look on the bright side.. at least it wasn't a white, lacy dress.”

However, fellow Reddit users were horrified at the wedding photo, which received hundreds of comments.

One wrote: “Wooooooooow. She may as well have peed all over him.”

Another added: “This has to be the worst yet. She's physically blocking wife from even thinking of holding HER HUSBAND'S hand!”

Agreeing a fourth wrote: “This is the worst. Prayers for you sweet bride.”

The photos were shared on the subreddit r/JUSTNOMIL.

The group has 931,000 members and is described as "a place to get support and advice dealing with mean, nasty, toxic, and/or abusive MILs and moms."

This is not the only mother-in-law to ruffle feathers at a wedding.

Earlier this week we told you about how guests were left "disturbed" as the groom's mum "spooned" him during the official family photos.

And a "creepy" mother-of-the-groom shoves bride out of the way for intimate dance with her son and insisted on wearing white too.