By the time they fell in love on the Hudson River in October 2016 aboard a boat named the Get Free, Kamillah Knight, 29, and Stephan Spilkowitz, 32, had already maneuvered their way past a pack of cultural differences and into a relationship they call untraditional in all the right ways.

Ms. Knight and Mr. Spilkowitz met at a Lower East Side bar in October 2013, though it’s likely they crossed paths at Cornell, where they both attended Greek life mixers. One weekend, Ms. Knight and her friend Olivia Walton went down to Manhattan. Ms. Walton mentioned the trip on Facebook; Mr. Spilkowitz, who had graduated a few years prior and was living in Yonkers, decided he’d go down to say hi.

But instead of catching up with Ms. Walton, he spent that night getting to know Ms. Knight on the dance floor and, later, at a cigar bar. Both felt an attraction brewing — but when Mr. Spilkowitz said good night because of an early wake-up call the next morning, they didn’t promise each other a next time.

That changed two years later, when Ms. Knight heard Mr. Spilkowitz calling her name outside a different Lower East Side bar, the DL, where Ms. Knight was celebrating Juneteenth with a group of Black Cornell alumni. “We danced and drank and talked again, but this time we did exchange numbers,” Ms. Knight said. The next night, they met in Greenpoint, Brooklyn, at a friend’s apartment. After that, “it was a mutual organic obsession,” Mr. Spilkowitz said. “We dated nonstop for eight months.”

By then, Ms. Knight and her daughter, Kari, now 9, were living in Montclair, N.J., with her mother, TaQuisha Knight. When she and Mr. Spilkowitz re-met in the summer of 2015, she had completed her master’s degree and was working as an analyst for Unilever, the consumer goods company. Babysitting help was regularly on offer from her mother, and the 45-minute drive between Montclair and Yonkers seemed manageable.

But at the beginning of 2016, Ms. Knight felt their mutual obsession fading. “We were just having fun,” Ms. Knight said. “And I wanted to figure out my love life in a real sense, so I decided to cut things off with him.”

[Sign up for Love Letter and always get the latest in Modern Love, weddings, and relationships in the news by email.] 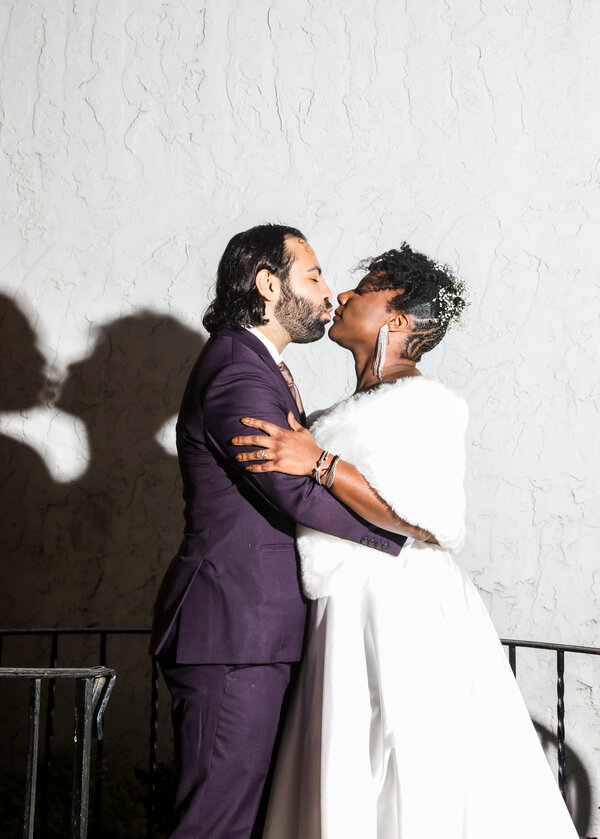 Mr. Spilkowitz, who had just ended a relationship he called “toxic” when he and Ms. Knight started dating, wasn’t devastated. And he wasn’t opposed to picking up where they left off when Ms. Knight emailed him that September after a revelation at Burning Man. “I had been a Burner for a few years at that time,” she said of her annual pilgrimage to the Nevada desert party. “It’s very much a place you can find yourself, and I had this deep premonition about my relationship with Stephan,” she said.

In Yonkers, Mr. Spilkowitz was feeling something similar. “I had had this unfulfilling bachelor’s summer,” he said. “Something was missing.” That something was Ms. Knight. When she climbed aboard the Get Free in October, showing off a set of sea legs neither anticipated, love set sail.

Ms. Knight, a novice, was a natural. “I’ve had a lot of guests on the water,” said Mr. Spilkowitz, who learned to sail at Cornell and was boat-sitting the Get Free for a friend. “Some are eager to jump in but hate being given direction. And some just want to lounge out and have a beverage. Somebody who has the courage and the instinct to be a good crew member is rare, but Kamillah was that and more.” By the end of their sunset tour of the Hudson, they were locked into something substantial.

For Ms. Knight, falling in love in an active setting felt right. At Cornell, she played rugby. And “growing up, my mom was great about keeping me active, and she was also good about encouraging me to be myself,” Ms. Knight said. Instilling the importance of her African-American and Native American heritage was important to TaQuisha Knight who, like her daughter, was a single mother. Montclair’s diversity and culture, Ms. Knight said, helped steer her past any negative self-perceptions. She wanted the same protection from judgment for her daughter Kari, part of why she chose to raise her in the area. The family moved to West Orange, N.J., in 2017.

Mr. Spilkowitz, since his graduation from Cornell, has worked in Yonkers at Andrus, a residential care facility for youth with emotional and behavioral problems. His mother, Michele Spilkowitz, said it has long been obvious he would work in a caring role. “Stephan is loving and extremely patient,” she said. “He’s always has this talent for adapting to people.”

He and Kari, Ms. Knight’s daughter, adapted to each other on their first visit, in March 2017, two months after Mr. Spilkowitz accepted Ms. Knight’s invitation to be hers exclusively when they were on a cruise to the Bahamas. Before the introduction to Kari, he fought nerves. But when the little girl pointed out a poop emoji stuffed animal in a Montclair store window, he exhaled. “I jumped in and said the poop emoji is my favorite. And that was it. We clicked from there.”

The setting in which Ms. Knight would click with Mrs. Spilkowitz a year later surprised them both. In the summer of 2018, Mrs. Spilkowitz, a French-Haitian immigrant, was diagnosed with Lewy body dementia. “She wasn’t herself physically, psychologically or cognitively, but her spirit was still there,” Mr. Spilkowitz said. His family, including his sister, Claudine Lafond, who lives in Australia, and father, Mark Spilkowitz, a native New Yorker raised by Orthodox Jewish immigrants from Poland, rallied to help her battle the progressive disease. “We weren’t about to give up.”

But there were rough patches. “There was one day my mom was really agitated,” Mr. Spilkowitz said. “Despite my best efforts to support her and communicate with her, and my dad’s best efforts, we weren’t able to help her.” Dejected, he called Ms. Knight. She hung up and drove to Yonkers. “Kamillah walked in the room, sat down with my mom and held her. They exchanged a few soft words. Where everyone else had failed, Kamillah was her savior.”

Ms. Knight can’t explain what happened in the room that day with Mrs. Spilkowitz. “I just listened to my heart, and it told me to whisper to her and to listen to her and not move,” she said. “I felt a need to show up for her in that moment.”

Mr. Spilkowitz already knew he wanted to spend the rest of his life with Ms. Knight when she came to his mother’s rescue. But she would beat him to proposing that August at Burning Man. “I had pieced together that he was the person for me,” she said. “I told my mom, ‘I want to marry Stephan, and I don’t think I’m going to wait for him to ask me.’ My mom said, ‘That sounds like something you would do.’ I took that as the validation I needed.”

Instead of a ring, she ordered a compass inscribed, “Navigate through life with me until the end,” a nod to their ongoing sailing adventures and their passion for travel.

At 3 a.m. on Aug. 22, Ms. Knight presented the compass in their tent in the Nevada desert. “I went on this long tirade about how much I love him, and then I pulled it out and said, ‘Will you marry me?’” Mr. Spilkowitz, still feeling the effects of a night of camp partying, asked if she was serious. “I was surprised, but I was elated,” he said. The answer was yes. Behind the tent, the sun was coming up. “People were cuddled up in blankets, waiting for the sun to rise,” Ms. Knight said. “We popped some Champagne, and they all celebrated us getting engaged.”

Ms. Knight is now director of diversity and inclusion at Ferrero, the company that makes Nutella. She is also a student again at Cornell; she expects to complete an executive M.B.A. in 2022. She still lives in West Orange with her daughter mother. Mr. Spilkowitz, who earned a master’s degree in organizational psychology and change leadership from Columbia in 2020 and is now an assistant director at Andrus, still lives in Yonkers. Quarantining since Covid has for them been an exercise in the moving of households halfway through each week. They will eventually land in one place or the other permanently. “We just don’t know when,” Ms. Knight said.

The effects of the pandemic has also been an opportunity to prioritize what they want in a wedding.

“One night we went out on the boat and we were like, wouldn’t it be cool to have a virtual wedding?,” Ms. Knight said. “Something people could look forward to during lockdown?” As avowed anti-traditionalist, the format appealed to them.

They were married Jan. 8, at the restaurant Saveur Creole in Montclair. Ms. Knight, in a strapless white wedding gown, walked with Kari down the restaurant’s fairy-lit aisle to where Mr. Spilkowitz, in a dark suit, waited under a huppah draped in lavender and purple flowers. TaQuisha Knight was the only other guest.

From his home in Yonkers, Mark Spilkowitz, a Universal Life minister, officiated via Zoom. “Stephan has Eastern European Jewish values joined with French-Haitian values,” he said. “Kamillah’s background includes African-American and Native American traditions. We are all children of the same universe.”

Ms. Knight read handwritten vows first. “The love you show to my daughter and my mother fills my heart,” she said. “I can’t wait for things to change in the world, but I’m confident we can get through anything.” Mr. Spilkowitz promised to trust and honor Ms. Knight’s intuition. “I knew you would be my true partner when you started sailing with me,” he said. “You never wavered as my first mate, no matter how stormy the seas got literally and metaphorically.”

As Mark Spilkowitz pronounced them married, they tied a rope knot together in a nod to their nautical side. Then they jumped the broom, an African American tradition. The leap that landed them on the glass, a Jewish custom, preceded a double stomp for good measure. And then the couple raised their joined hands in celebration.

Where Saveur Creole, a restaurant in Montclair, N.J.

Soul Party Ms. Knight and Ms. Spilkowitz’s Covid-compliant wedding included a reception with a D.J.; the 500 virtual guests, plugged in from every continent, they said, including Antarctica. Guests took turns dancing to soul classics in the Zoom spotlight.

Something New Ms. Knight will keep her last name, but she and Mr. Spilkowitz started a new tradition: each is adding the other’s last name as one of their middle names to carry both lineages forward.

A Recovery Though Michele Spilkowitz spent 48 days in the hospital after her Lewy body dementia diagnosis, she is now feeling fine and has recovered much of her memory. “As quickly as she fell into it, she came out of it,” Stephan Spilkowitz said. “It was like a miracle.”

02/05/2021 Fashion Comments Off on It Was Supposed to Just Be Fun. How Did They End Up Married?
Recent Posts