Kris Van Assche wasn’t allowed to play with Ken dolls when he was a child. That’s no longer the case.

In fact, as part of the celebration of Ken’s 60th birthday on March 11, the creative director of Berluti was tapped by Mattel to create three of his own versions of the famed doll and dress them in some of Berluti’s newest fashions. Van Assche also created a special beach buggy for the collaboration that will whisk the dolls on a fantasy trip between Paris and Los Angeles.

The designer said Mattel reached out to him to see if he would be interested in working with the company on a special project to commemorate Ken’s milestone birthday, and he didn’t hesitate. “I was intrigued because this is not an expected collaboration,” Van Assche said. “But I thought it would be fun to do something unexpected.”

Fun facts: Ken’s surname is Carson and he was named after the son of Mattel founders Ruth and Elliot Handler. Ken was created on March 11, 1961, two years and two days after his on-again off-again girlfriend Barbie. The couple’s long courtship ended on Valentine’s Day in 2004, but the romance was rekindled on the same day in 2011 — and they’re still together. Ken, who made his big-screen debut in “Toy Story 3,” is from the fictional town of Willows, Wisc., and the original version of the doll sported molded plastic hair that was either blond or brunette. In celebration of his milestone birthday, Mattel has reproduced the original Ken, complete with a blond plastic buzz cut, red swim trunks, red sandals and a yellow towel. 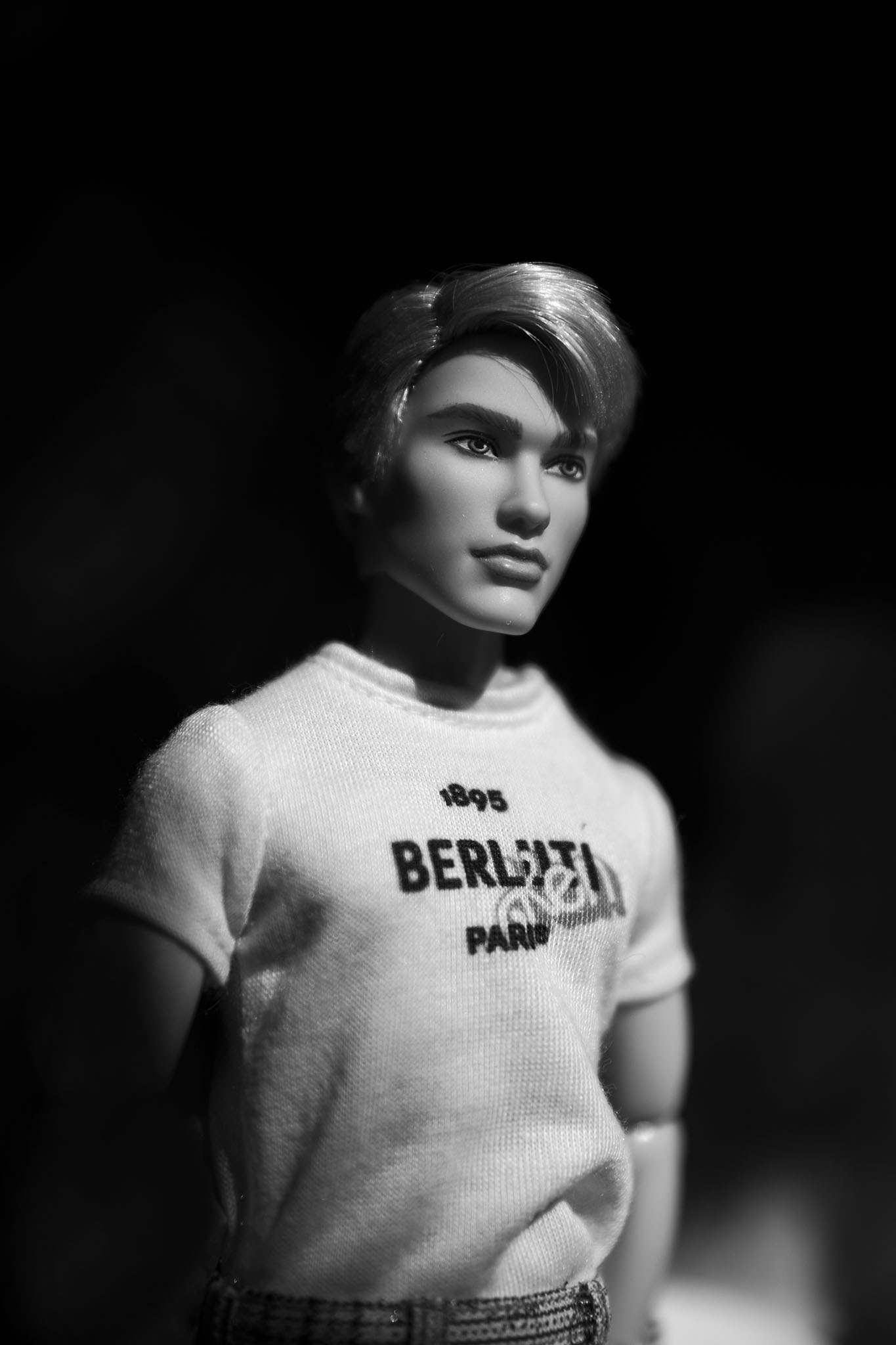 The Van Assche versions are different. Although one is similar to the original — close-cropped blond hair with a side part — there are Asian and Black versions as well. Van Assche said Mattel “really gave me a free hand to do whatever I wanted” in terms of body type, hair and race, and he looked to the casting of his fashion shows for ideas. The designer said he always hires a diverse cast for his shows and was inspired by some of his favorite models when reimagining Ken. “I didn’t want it to be a cliché, but I came up with what I thought were ideal images,” he said.

He then dressed them in miniaturized versions of his spring ’21 Berluti x Brian Rochefort collection: a brown leather jacket worn with a short-sleeved printed silk shirt, elasticated trousers and braided calf leather Camden shoes; a Prince of Wales double-breasted suit with a Ken & Berluti logo T and Camden shoes, and a printed shirt with black trousers, a belt and braided calf leather Stellar sneakers. There is also a shrunken-down version of the brand’s signature Nino clutch as well as an updated version of the Berluti beach buggy first created two seasons ago in leather and canvas with a ’60s vibe, manufactured by Hot Wheels. 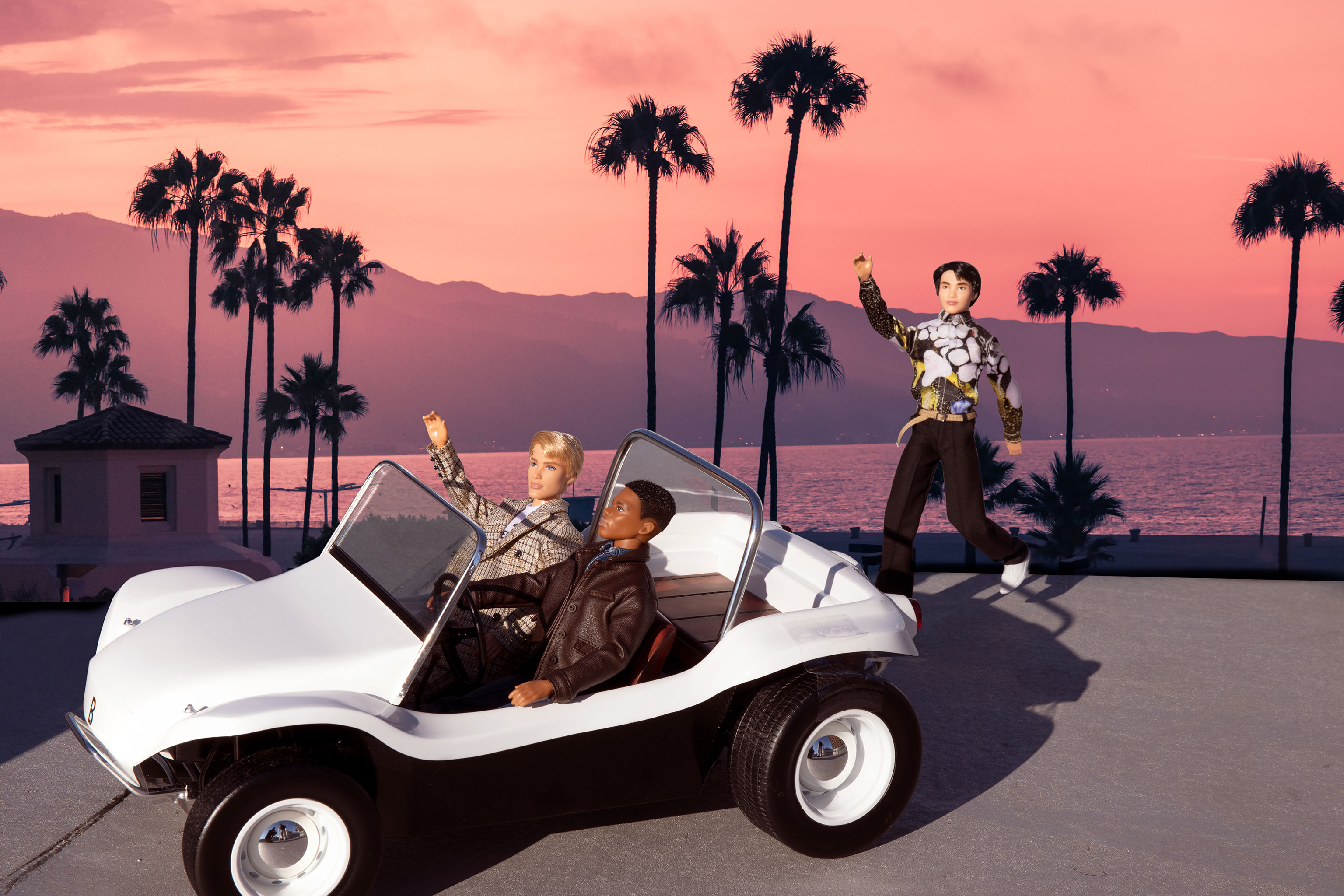 Mattel collaborated with Kris Van Assche, Creative Director of Berluti, to create three Ken dolls for Ken’s 60th birthday. Van Assche also created a special beach buggy for the collaboration that will whisk the dolls on a fantasy trip between Paris and Los Angeles. Jenna Greene/WWD

Van Assche said that while he provided the designs for the clothes and the buggy, he left the manufacturing to Mattel to ensure that they met all the safety standards required for toys. Although the Ken versions he created are considered collectibles, “and kids can’t play with collectible items, at the end of the day, these are toys,” he said. In fact, Van Assche wistfully said that his hope is that children will have the opportunity to play with his Ken dolls despite their collectible status.

The one-of-a-kind dolls are going to be auctioned off in May, with proceeds going to Make-A-Wish, a charity chosen by Van Assche that grants wishes to children with critical illnesses. The designer revealed that his family “was touched by critical illness, so it’s a subject I feel very strongly about.”

Even if children will only be able to look at the Berluti Ken dolls rather than play with them, the dolls themselves will enjoy an adventure before they are sold. Van Assche created a story where the three models sneaked out of the Berluti fashion show at the Palais Garnier in Paris, jumped into the buggy and made the trip to L.A. — “no plane needed,” he said with a laugh.

“Kids tell stories and kids dream,” he continued, “which is quite related to what we do as fashion designers. So I wanted to create a fantasy world that was innocent, with no restrictions and no COVID-19 — it was a refreshing thing to do.”

Hopefully the dolls will be able to keep their clothes clean on this long trip from Paris to Los Angeles since they are among the first to sport pieces from the spring collection. “Since this was coming out in March, we wanted to show what will be in the stores,” Van Assche said of his styling selections. “So I chose three key looks.”

In addition, when they’re resting in L.A. after their transatlantic voyage, the dolls will be showcased in Berluti’s Beverly Hills store next to full-size mannequins, and Van Assche thought it would make a statement to have them dressed in the same outfits. 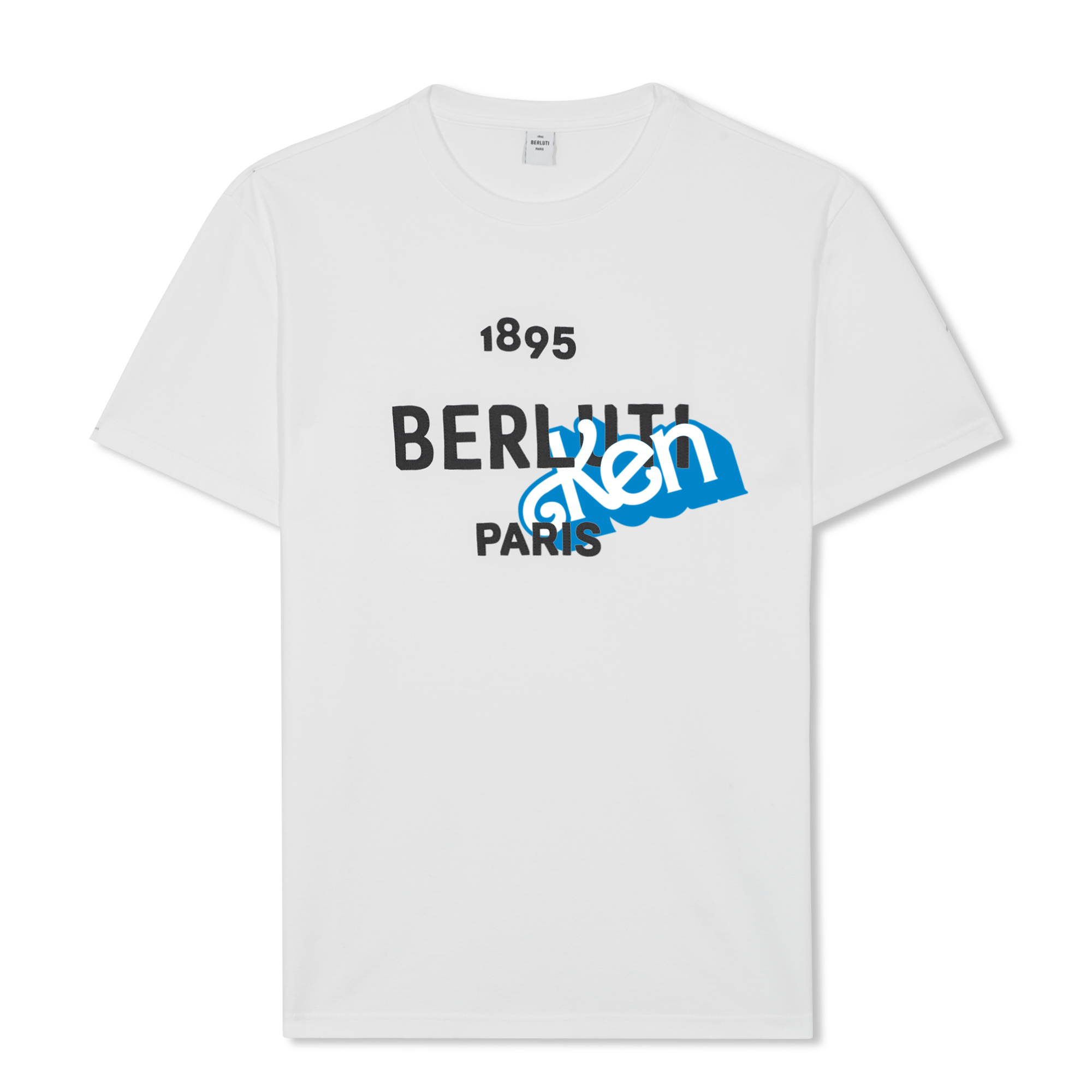 To promote the collaboration, Van Assche also created two dedicated products for full-size people: a special-edition T-shirt displaying Berluti’s and Ken’s interlaced logos “fused together” — only 100 were produced — and the Nino clutch, one of the brand’s signature pieces in canvas, superimposed with Berluti’s logo, with Venezia leather details and a California Blue patina. Both are available in Berluti stores in the U.S, France, China and Japan, and online worldwide. Store windows at the Berluti stores in Los Angeles and on the Rue du Faubourg Saint-Honoré in Paris are also dedicated to the collaboration.

Van Assche said he looks at Ken as “the ultimate icon,” and is “amazed” at his staying power and how he has evolved to become more inclusive over the years.

So what’s next on Van Assche’s wish list? “I don’t want to get in trouble with Ken, but Barbie can be my next thing,” he said. “They have my number, I’m available.”

In addition to the reproduction of the original Ken, which retails for $50, Mattel has created a series of retro dolls to celebrate his 60th. They include throwback beach, rocker and workout Kens, which retail for $9.99.

Richard Dickson, president and chief operating officer of Mattel, said Berluti’s interpretation of Ken is just the latest illustration of how the toy company has managed to keep Ken and Barbie “part of the cultural conversation” for more than six decades. 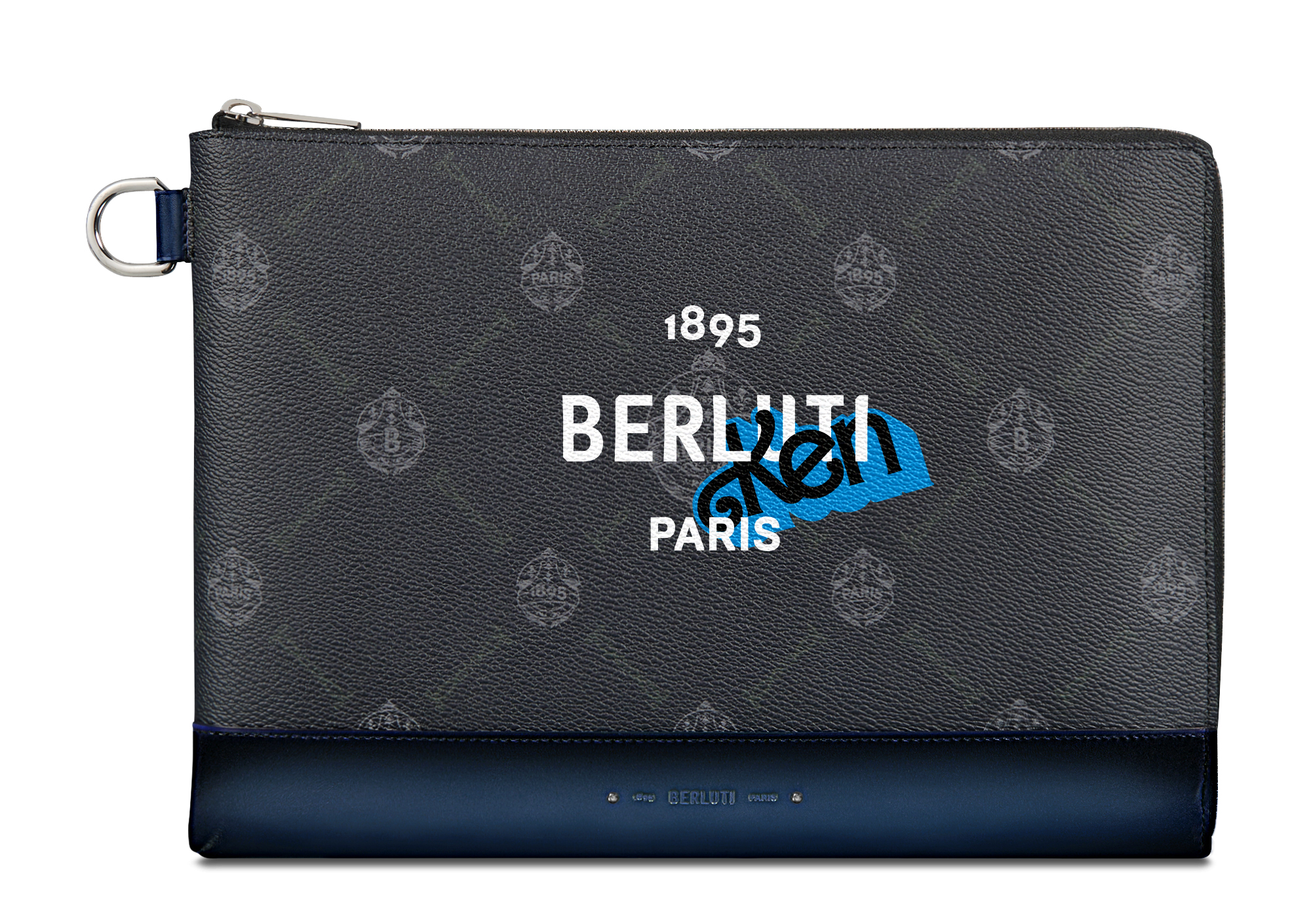 The Berluti x Ken Nino clutch was reimagined for the collaboration.

“Ken looks great and we’re excited for him to get so much attention on his birthday,” Dickson said. He said working with Van Assche and Berluti on the project was “truly an honor” and Mattel was humbled to learn that the designer had been inspired by Ken over the years and he was charmed by the story Van Assche came up with to introduce the collaboration and will showcase it on the Barbiestyle channel. “It’s such a great narrative,” he said.

Even so, there are no plans to make the Berluti dolls available commercially. “Part of the fun of these type of collaborations is their scarcity and collectability,” Dickson said.

Next up will be a collection designed by Harlem style setter Dapper Dan who “customized looks for Ken for his birthday,” Dickson said. That collection will make its debut this week. The “show-stopping looks,” which include bell-bottom pants, a two-tone red parka with fur-lined hood, a monogrammed slim-fit suit and a multicolored motorcycle jacket, “reflect who Ken is today.”

Over the years, Dickson said some of the best-known fashion designers have created collections for Ken. “Ken fashion collaborations are part of our heritage,” he said. They include Jean Paul Gaultier, who dressed Ken in a suit with a long skirt in 1985. “That was a pretty bold statement at the time,” Dickson said.

Other partnerships included Karl Lagerfeld, who turned model Baptiste Giabiconi into a real-life Ken to celebrate Barbie’s 50th birthday in an exhibition for Colette in 2009, and Moschino’s Jeremy Scott, who created a colorful striped tuxedo for Ken in 2016. Other designers who have dressed Ken over the years include Zac Posen, Billy Reid and Phillip Bloch.