Meena Harris, a lawyer and former tech executive, used to make statement T-shirts as a side job. Her most famous read, simply, “Phenomenal Woman.” (Perhaps you saw it on Instagram, worn by celebrities including Serena Williams, Lizzo, Ciara, Viola Davis, Laverne Cox and Eva Longoria.)

But during a summer of mass protests against racism and injustice, Ms. Harris’s apparel took on new resonance. Naomi Campbell wore a “Phenomenally Black” T-shirt for a high-end fashion event in July. Regina King accepted her lead actress Emmy in September wearing a shirt by Ms. Harris, with an illustration of Breonna Taylor and the words “Say Her Name.”

Ms. Harris’s passion project became her full-time job; she left her role as head of strategy and leadership at Uber to run her own company, called Phenomenal. She also picked up another side-gig — one that brought her more visibility than any prestigious job that came before it: campaign surrogate for her aunt, Kamala Harris, now the vice president-elect.

At the time, Ms. Harris, 36, made it clear that her clothing brand was “not something that I want to be using to promote the candidacy of a family member.” In a phone interview, she added: “There’s a lot of cool people in my family that do cool stuff. And this is my thing. I’m doing my own thing.”

But her relationship to the vice president-elect is a fact that can’t be separated from her story or that of her business.

As a surrogate, Ms. Harris offered insight into her family in ways traditional (introducing her aunt in a video at the Democratic National Convention) and more novel (during the primaries, she defended her aunt’s criminal justice record against progressives who disparaged her as “a cop” in a series of Instagram stories).

She also sold several Kamala-related sweatshirts, including one with the letters “MVP,” for Madam Vice President; one emblazoned with the phrase “I’m Speaking,” referring to the much-memed moment from the vice-presidential debate; and a third with the names Sojourner (Truth), Harriet (Tubman), Shirley (Chisholm) and Barbara (Jordan) stacked above Kamala’s, released in partnership with Win With Black Women.

But putting a campaign slogan, like “Kamala for the People,” on a shirt would be too explicit, Ms. Harris said, crossing the line she’s drawn to protect her brand and establish her own identity.

“I look at her as another figure in history and someone to be celebrated,” she said of her aunt — for example, with a holiday sweatshirt reading “Deck the halls with smart, strong women, Kamala-la-la-la-la-la-la.” 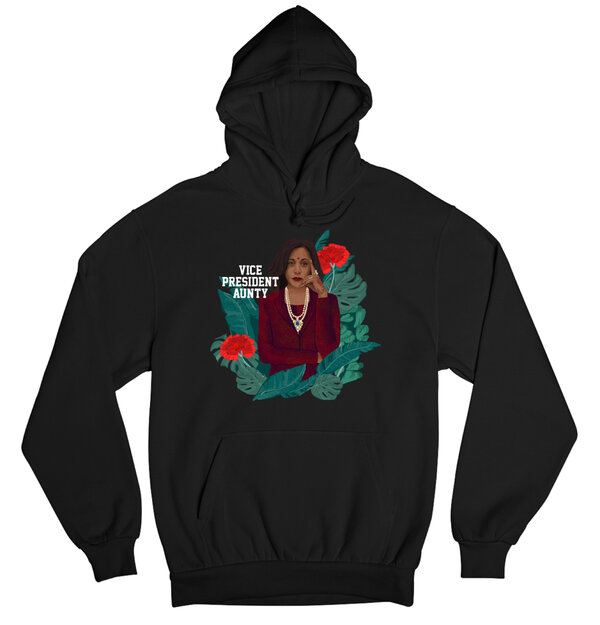 The name of Ms. Harris’s company comes from a Maya Angelou poem, published in 1978: “I’m a woman / Phenomenally. / Phenomenal woman, / That’s me.”

First sold during Women’s History Month in March 2017, the “Phenomenal Woman” shirt was meant to remind people that Ms. Angelou “came before us, and it was women like her,” Ms. Harris said, “who made it possible for the Women’s March to happen in the huge way that it did.”

She planned to split profits from the shirt between seven women’s organizations. “I thought we’d sell a couple hundred shirts, if I got enough of my friends and family to support,” she said. But on release day, she sold more than 2,000, she said. (It was modeled online by friends, including Issa Rae, who was a college classmate, and America Ferrera.)

At the time, Ms. Harris didn’t know exactly what to do with the enthusiasm, she said: “How do we keep this going? What are we talking about? What are we doing? What’s our message?” So she gave herself a mission: raising awareness around issues affecting underrepresented communities.

The Breonna Taylor shirt, released in August, flooded social media, buoyed again by a flock of celebrities. On its front, the black tee read “Arrest The Cops Who Killed Breonna Taylor” in pink text (Ms. King wore it backward at the virtual Emmys). Profits from the $45 shirt benefited the Breonna Taylor Foundation. (Depending on sales, other Phenomenal products raise anywhere from $5,000 to $150,000 for a nonprofit, according to Ms. Harris.)

Inevitably, the simple T-shirt company has become a multipurpose venture, with a content arm, Phenomenal Media (for publishing articles and putting out full-page newspaper ads), and a creative agency, Phenomenal Productions (which will make videos, products and other content for ideologically aligned clients). On Jan. 19, Ms. Harris will publish her second children’s book, “Ambitious Girl.” And on the following day, one of the characters in her first children’s book, “Kamala and Maya’s Big Idea,” about two sisters taking on a community project, will take her oath for the second highest office in the nation.

Kamala and Maya were raised primarily by their mother, Shyamala Gopalan, a scientist and activist.

When Maya was 17, she had Meena. She raised her daughter with the help of her mother and sister, while earning degrees and building a career in law and progressive policy. Maya worked as a law school dean, executive director of the A.C.L.U. of Northern California, adviser to Hillary Clinton, and her sister’s campaign chairwoman — among other roles. Since 1998, she has been married to Tony West, who was the associate attorney general during the Obama administration and is now Uber’s chief legal officer.

Young Meena Harris, surrounded by lawyers, wasn’t nudged toward law. Her first job, after graduating from Stanford University in 2006, was as a community operations manager at Facebook — just as it was expanding to the general public, no longer available only to college students.

Ms. Harris also joined the 2008 Obama campaign, in youth vote organizing and grass roots fund-raising. But finally, she decided to start law school, as if it were the “path of least resistance,” she said.

In 2014, two years after she graduated from Harvard Law School, Ms. Harris was working as a cybersecurity and data privacy attorney in Washington, D.C., when she had her first “kind of fun, provocative” idea for a T-shirt, she said. Inspired by the early Mark Zuckerberg business card that said “I’m CEO, bitch,” her tee read “I’m an entrepreneur, bitch.” (These were the “Lean In” years.)

By 2015, Tyra Banks was wearing the shirt onstage during press interviews. And Ms. Harris — who’d always identified as a creative person with “entrepreneurial tendencies,” she said — was feeling, for the first time, like an entrepreneur.

T-shirts are not a new form of expression, either of values or of protest. But unrest during the Trump administration — and the steady rise of both political expression and posturing on social media — has inspired a great number of them. Mugs, onesies, pet collars, phone cases and fanny packs, too.

In September 2019, the sisters Kate and Lisa Sokolov founded Social Goods, an online boutique for activist apparel. All of their sales include a donation — on average 25 percent of the proceeds, the founders said — to various related nonprofits. Phenomenal was one of the first brands sold on their site.

The founders see merchandise as a “catalyst and entry point for change,” Kate Sokolov said — “a way to get people to start talking and keep talking about issues.”

It’s the “keep talking” part of it that Ms. Harris has been considering herself lately.

“I think this is going to be a big question for us next year. When we don’t have the constant drama and attacks that are coming out of the administration, how do we keep people engaged in a meaningful way?” she said. “Not just the people that have been doing this work, and will continue doing this work, and are literally doing it all day every day. But regular folks.”

Communicating serious messages through a medium like apparel is tricky. Tone is paramount. Nuance can be lost. There’s only so much room on a tee.

“Just because a bunch of people liked it doesn’t mean that you should go put it on a T-shirt and sell it,” Ms. Harris said, of ideas she knew would be popular but messy.

Not everything sold by Phenomenal has a social justice message. Addressing work-from-home culture, Ms. Harris released sweatshirts in 2020 that read “Can everyone mute please?” She’s also sold pieces without phrases, like a one-piece swimsuit printed with Sonia Sotomayor’s face. Proceeds from these more general items are donated to a spread of nonprofits, rather than to a specific cause or organization.

One of those nonprofits is Essie Justice Group, an organization for women with incarcerated loved ones. Gina Clayton-Johnson, the group’s founder and executive director, said working with Phenomenal has relieved some of the overwhelming pressure to fund-raise.

“My team needs to be writing policy, running healing circles and organizing outside jails and prisons. They don’t need to be setting up chairs at a fund-raiser, or putting cute little sequins in envelopes,” Ms. Clayton-Johnson said.

On a phone call in August, the day after making her Democratic National Convention debut, Ms. Harris described herself as happy but “running on fumes.” She’d spent that night “drinking wine in a furry bathrobe” while watching the videos and speeches, she said.

During a conversation a few months later, the election was over but the holidays were approaching, and Ms. Harris’s partner Nikolas Ajagu, who works as an executive at Facebook, had just told her that letters to Santa from their two daughters (ages 2 and 4) had gone missing. There was a pile of laundry on the couch and the house was a “mess,” she said, using an expletive.

Because of her work with Phenomenal, Ms. Harris already had a robust following before her aunt became Joe Biden’s running mate in August. But starting that month, she began gaining followers on Twitter and Instagram in droves.

Accordingly, she has faced more criticism, trolling and general scrutiny for actions associated with her family. One recurring topic is Prop 22, a California ballot measure approved by voters in November, allowing companies like Uber to continue classifying drivers as independent contractors rather than as employees.

Ms. Harris’s stepfather is the top lawyer at Uber, which spent millions trying to pass the measure. (Her aunt strongly opposed it.) Ms. Harris was dragged into the fight as well because of her former job at Uber. In November — after the election — she decided to make it clear that she voted against Prop 22.

“I think it’s a very simple thing,” she said. “I’m very lucky to be in a family of a bunch of successful people who are doing a lot of different things. There’s interesting dynamics around that, but I’m my own person with my own views and my own platform and my own aspirations.

“Sure, you can be curious about somebody’s relationship with their family, or how their communications around these things are,” she said. But at the same time, she noted, “I’m not an elected official. I’m not formally accountable as a public servant, and I think sometimes, people do kind of treat you that way if you have a public profile.” (She later added: “It’s weird to talk about yourself as having a public profile.”)

When she talked about her decision to leave Uber in June, Ms. Harris used phrases like “breaking away” and “liberating myself.” For years, she’d felt like she was on a “treadmill of checking prestige boxes” — elite schooling, a law degree, a high-powered tech career, a treadmill powered by the ambition of her first-generation immigrant family.

Still, that ambition was fairly contained to the worlds of law and activism, “which of course, are core to who I am and how I view everything,” she said.

“No one in my family, other than me, has a business-minded bone in their bodies. I was not exposed to that at all,” Ms. Harris said. (Her stepfather didn’t take a job in the corporate world until 2014.) The idea of entrepreneurship? “That was just totally foreign.”

Now, she’s on a new treadmill. “I just didn’t really know the path to getting there,” she said.

01/09/2021 Fashion Comments Off on Meena Harris, Building That Brand
Recent Posts
We and our partners use cookies on this site to improve our service, perform analytics, personalize advertising, measure advertising performance, and remember website preferences.Ok