HOURS of sitting still can be difficult for the little ones, even on a good day, which means for many parents the thought of catching a flight with them can send shivers.

But sometimes it is unavoidable, and you have to get on with it, providing as much entertainment as possible. 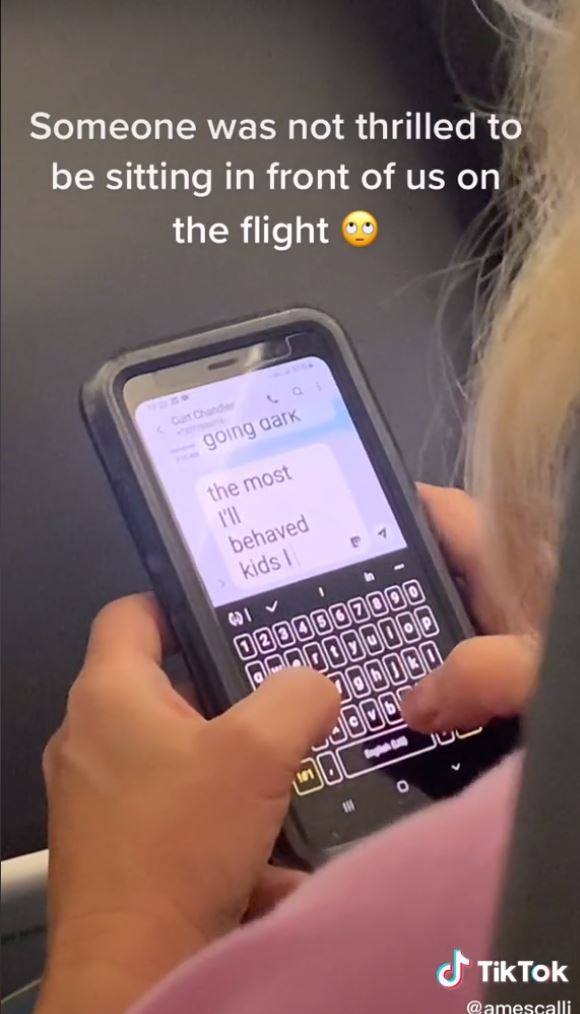 However, one mum has hit back at a passenger on a flight after catching them texting about her “ill-behaved brats” and says they weren’t even that “terrible.”

Amy Johnson said she "tried her best" to keep her kids, aged four and one, from behaving during the flight.

She shared a video on TikTok capturing the moment she noticed a woman sitting in front of them complaining about the noise of her children in a text message.

The mum said: "I actually didn't think the kids did terrible on the flight but clearly this woman had other opinions."

In the video, it appears the woman is sending a message which initially said "the most ill-behaved brats I have ever seen on a plane," before she changes it to "kids" instead.

Amy added: "Love us or hate us, we did our best to keep our four and one-year-old quiet and happy during the flight. Kids aren't for everyone.

Love us or hate us

"We had landed and we were waiting to pull up to deplane. My son was playing with another boy in the back giggling.

"They had just seen each other and had not been playing the whole flight. My one-year-old was sleeping."

In the background, you can hear a high-pitched child's voice and an adult telling them to calm down.

The video left people divided, as one commented: "Yeah, this isn't helping your case….”

Amy responded: "I'm not trying to make any case here. I found it funny. I was not offended and we did apologise. That was also not all my child in the background.

"I was holding our sleeping one year old, not ignoring my children. My husband hushed our son and the boy behind us for giggling. Calm down."

But others defended the mum, with one writing: “Oh no, not people mum-shaming her for her kids being kids. Maybe next time she should put tape over their mouths, oh and zip-tie them for no movement.

"I don't see anything wrong with this. Kids have no sound filter. They will get loud until someone tells them, and you told them.

"Are kids supposed to just stay quiet all the time now? I understand being respectful and not disturbing others but the kids were just laughing."

Check this, flight attendant answers top three questions & reveals why you should NEVER open your hotel room when you hear a noise

Plus, air hostess lists the things you ‘should NEVER do’ on a flight – but some passengers don’t agree

And, TikTok flight attendant’s top tips for staying in hotels – including £1 brekkie item she packs to stop midnight cravings