A MAN has asked fellow parents for advice after being told by his wife that he is fat-shaming their 12-year-old daughter by taking her out for runs.

The 34-year-old dad explained that he was confronted by his wife after encouraging his adopted daughter to exercise with him, after he noticed she was putting on some weight during lockdown. 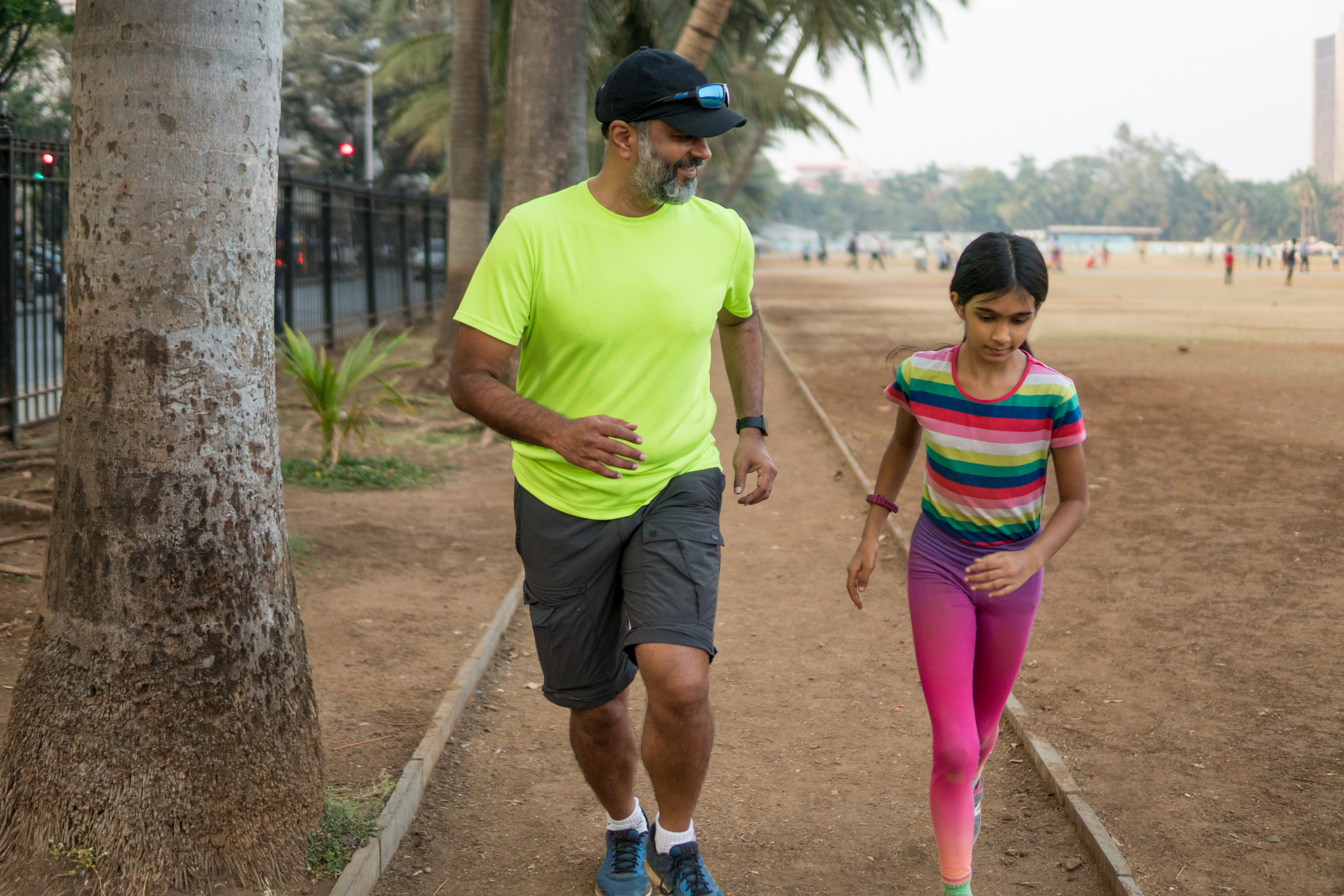 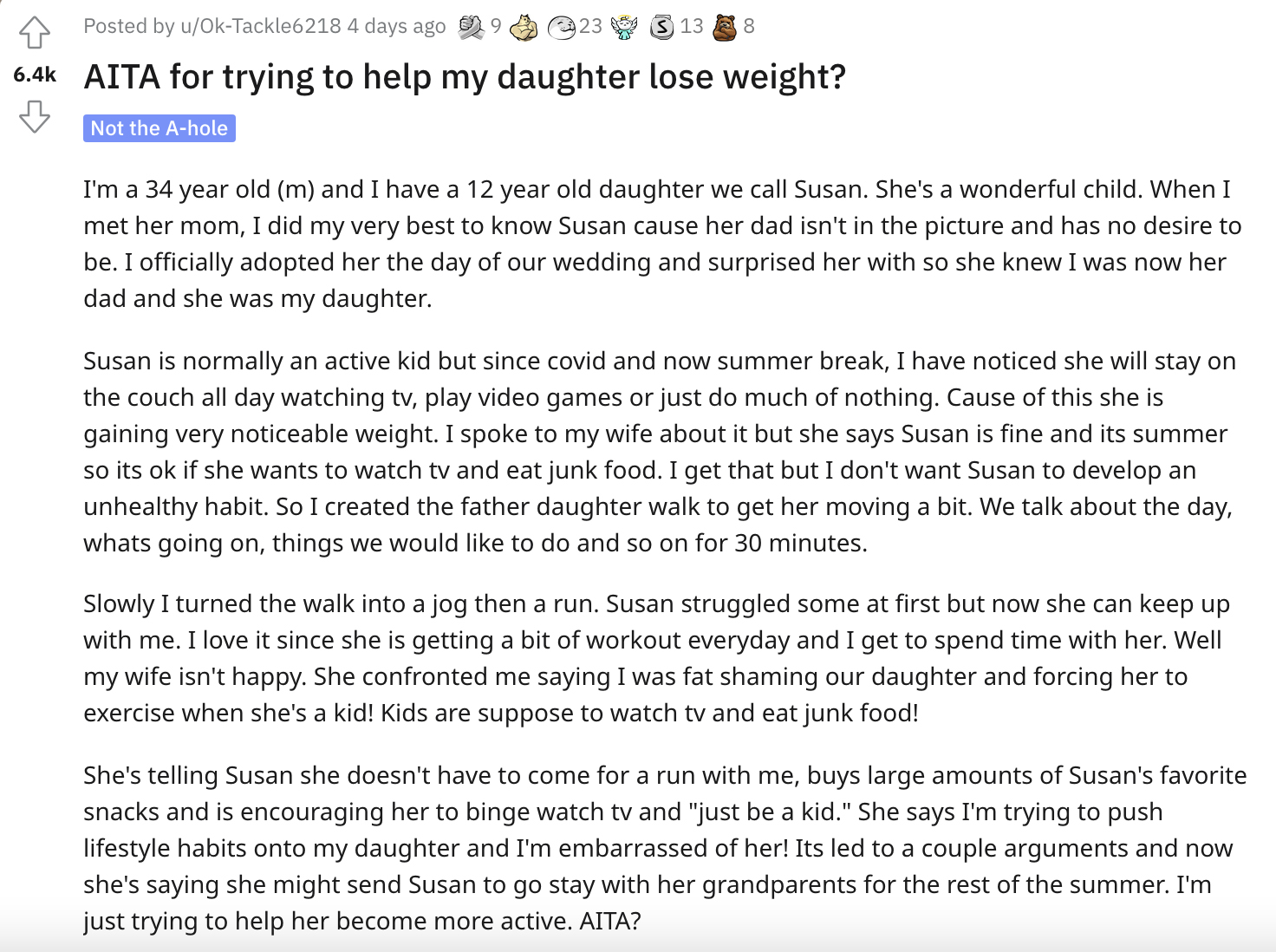 Posting to Reddit, he explained that while his daughter is "normally an active kid", since the pandemic and being on summer break she "stays on the couch all day watching TV" and he doesn't want her to develop "unhealthy habits".

He wrote: "I have a 12 year old daughter we call Susan. She's a wonderful child. When I met her mom, I did my very best to know Susan cause her dad isn't in the picture and has no desire to be.

"I officially adopted her the day of our wedding and surprised her with so she knew I was now her dad and she was my daughter.

"Susan is normally an active kid but since covid and now summer break, I have noticed she will stay on the couch all day watching tv, play video games or just do much of nothing.

"Cause of this she is gaining very noticeable weight. I spoke to my wife about it but she says Susan is fine and its summer so its ok if she wants to watch tv and eat junk food (sic)."

The man continued: "I get that but I don't want Susan to develop an unhealthy habit. So I created the father daughter walk to get her moving a bit. We talk about the day, whats going on, things we would like to do and so on for 30 minutes.

"Slowly I turned the walk into a jog then a run. Susan struggled some at first but now she can keep up with me. I love it since she is getting a bit of workout everyday and I get to spend time with her."

He shared that while he enjoys exercising with his daughter, his wife has called him out for "fat-shaming" her child and instead encourages her to "be a kid" by buying her "favourite snacks" and encouraging her to "binge-watch TV".

"My wife isn't happy. She confronted me saying I was fat shaming our daughter and forcing her to exercise when she's a kid! Kids are suppose to watch tv and eat junk food," he said.

"She's telling Susan she doesn't have to come for a run with me, buys large amounts of Susan's favourite snacks and is encouraging her to binge watch tv and 'just be a kid'.

"She says I'm trying to push lifestyle habits onto my daughter and I'm embarrassed of her! Its led to a couple arguments and now she's saying she might send Susan to go stay with her grandparents for the rest of the summer. I'm just trying to help her become more active."

The dad added that he "doesn't force" his daughter to exercise with him and he will "never" make her head out on a run if she doesn't want to go, adding: "I just wanted her to be active again since I noticed how much more she would just stay in front of the tv, computer, and do nothing. Never do I say or mention her weight."

He stressed that his wife is welcome to join them on their walk/run, but she always says no, and revealed that he plans to speak to his partner "once she calms down", as he wants them all to spend time together as a family.

My wife isn't happy. She confronted me saying I was fat shaming our daughter and forcing her to exercise

Reacting to his post, hundreds of fellow parents were supportive of the dad's efforts and didn't agree that he was "fat-shaming" his daughter.

One person commented: "How is you going for a run 'pushing lifestyle habits' on her, but mom buying junk food isn't? You didn't fat shame her. You created an activity for both of you to do together and unless you left significant facts out, she likes it… A healthy, active lifestyle is the best thing to 'push' on your kid'."

Another agreed as they shared: "There's also a huge difference between 'don't push your lifestyle onto our child' and doubling down by buying extra junk food."

A third wrote: "We all damage our kids in different ways without realising it, and without meaning to. Sometimes the best thing to do is ask the kid what they want and need."

One person suggested his wife may be "jealous" of the time he's spending with her daughter, adding: "Wondering if that’s the problem. Mom is jealous. Maybe the daughter has shared how much she enjoys time with her dad."

"Your approach is sensible so long as Susan is happy to participate," said another, while one more offered: " it’s good to set healthy eating habits and exercise at an early age. But she’s also 12; who wants to watch tv and eat junk food. There should be a happy medium." 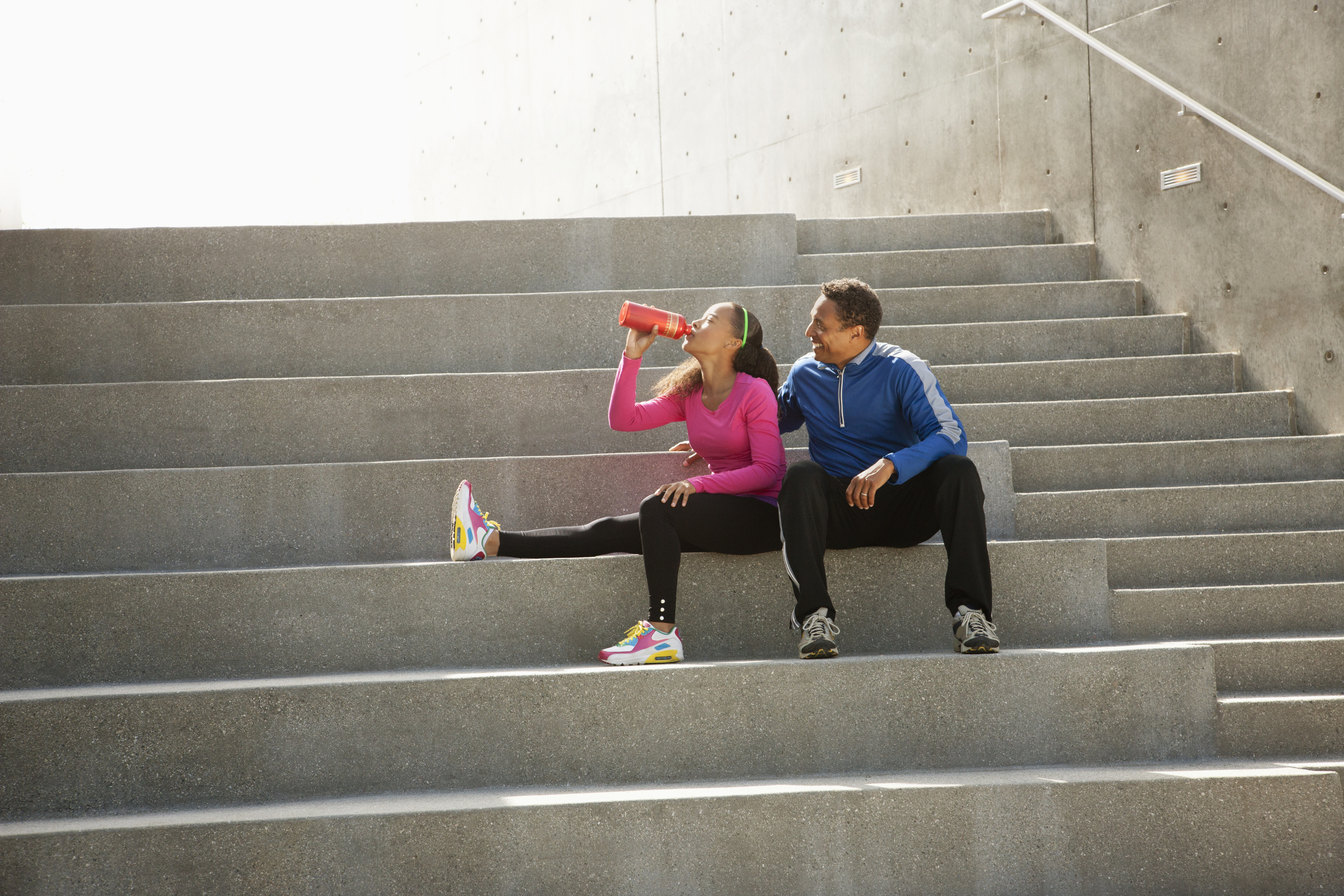 For more parenting related stories, check out this mum-of-16's colour coding tips to speed up laundry & why she NEVER writes kids’ names in clothes.

Plus, mums share the ‘useful lies’ they’ve told their kids – including a genius way to ALWAYS know when they’re fibbing.

And one mum is slammed for what she does to get her ‘fussy’ son, 14, to drink water.

07/15/2021 Fashion Comments Off on My wife says I’m fat-shaming our daughter by taking her running, but I hate that she lets her binge TV and junk food
Recent Posts