In August, Kerry Washington, Eva Longoria, Tracee Ellis Ross and Julia Louis-Dreyfus took turns as M.C.s at the Democratic National Convention. They were picked seemingly for their ability to reach different groups of women voters and represented exactly what Hollywood and the party hoped to telegraph about itself: classy, inclusive, empathic.

Donald Trump never had the acceptance of this crowd.

Long after he became a famous developer, there remained about him a face-pressed-against-the-glass quality, at least among the establishment of Park Avenue and the glitziest people of Hollywood. Not for nothing did Fran Lebowitz once describe him as a “poor person’s idea of a rich person.”

He spent much of 1990 trying to get Madonna to perform at the opening of the Taj Mahal in Atlantic City, but the only thing he got was dissed when Interview asked her that year about rumors he was going to run for president and she responded by calling him “a wimp,” before adding that America should select someone “more handsome.”

When a Trump got invited onto the yachts of media and entertainment moguls like Barry Diller, David Geffen and Rupert Murdoch, her name was usually Ivanka.

It wasn’t a surprise that even the most apolitical stars in America felt the need to express disgust with Mr. Trump during and after his 2016 presidential run.

Hollywood is, after all, a bastion of liberalism, and the jet fuel of the outgoing president’s political career was a racist conspiracy theory he peddled about Barack Obama’s birthplace. Having Scott Baio and Antonio Sabato Jr. as supporters doesn’t really count as a big win, Janice Min, the former editorial director of The Hollywood Reporter, said in an interview. 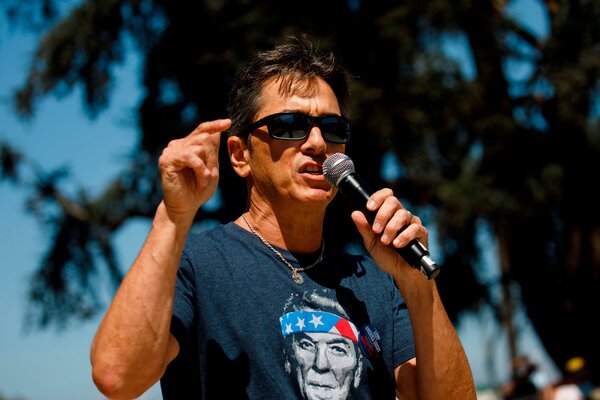 But because Mr. Trump’s political ascent occurred after his hit reality show, “The Apprentice”; because he had a flair for the comic insult that is unrivaled in modern politics; and because — in the absence of real celebrity alliances — he essentially hatched a bunch of his own while in office, his presidency had an air of infotainment like no other.

More than masterminding the concept of alternative facts, Kellyanne Conway, Jason Miller and Steve Bannon created seemingly alternate realities. Everything was role playing. Even Paul Manafort’s hair was a show.

And with conventional, big-league stardom in decline and microcelebrity on ascent — hastened by Instagram, podcasting, Twitter and reality TV — Mr. Trump and his backup band of pugilistic pundits were right on schedule.

Jared Kushner and Stephen Miller, who at least in appearance resembled the austere, technocratic types who populated the Obama administration, took on important, but largely behind-the-scenes roles. The outward-facing men of Trumpworld tended to be big, scruffy and full of bluster.

The women in his orbit, chief among them Ms. Conway — who described herself in 1998 to Harper’s Bazaar as a person whose broad mind and tiny waist never traded places — more often than not looked like Fox News hosts. And occasionally were.

Mr. Trump’s critics derided the men and women of his tribe as D-list. What they often failed to see, said Jose Antonio Vargas, the founder of Define American, a media advocacy organization that works with celebrities on changing the public perception of immigrants, was that this was what made them effective.

In an America filled with people accustomed to being disdained and dismissed, Mr. Vargas argued, voters in red states and swing states for the first time in a long while got to see a White House that was almost entirely devoid of mystique.

“Through the influencers in his orbit, Trump created a parallel reality for people who don’t need the validation of The New York Times, who don’t listen to NPR, and couldn’t give a hoot about the difference between New York magazine and The New Yorker,” he said.

“Who is on MSNBC?” Ms. Min said. “More often than not, it’s someone in Georgetown with carefully curated books on American history behind them. The person speaking for Trump on Fox News is loud, brash and may not have read a book in the last year, but it doesn’t matter. It’s from the gut.”

Twitter, where ideas get winnowed down to sound bites and fights get likes, has proved to be a forum remarkably like reality television, Ms. Min added. Not just because Mr. Trump could smack down enemies without adjudication by journalists, but because his habit of retweeting the most vitriolic attacks on his opponents amplified the voices of those making them, turning them into personalities and building the illusion of a populist uprising around what was mostly a cult of personality.

“It’s algorithmic behavior,” she said. “People like what you say, you get retweets and validation from the president, so you say more and more of it. It’s like in reality television, where you get rewarded for how outrageous your antics are, how bold you are, and also, how aggressively you’ll go after the opponent.”

Mr. Trump didn’t have to look far to find people who’d do this. His eldest son, Donald Trump Jr., a self-professed “social media troll” amassed a following of 6.2 million people by throwing down at people like Robert Mueller, Joe Biden and Elizabeth Warren. That led to a book, “Triggered,” a New York Times best seller.

It is dedicated to “the DEPLORABLES,” a description Hillary Clinton used during her 2016 presidential campaign to describe many Trump supporters, who reclaimed it as a badge of honor. “While the elite of the other party look down on you and would rather you stay silent, I salute your work ethic, patriotism and values,” wrote the younger Mr. Trump, whose girlfriend Kimberly Guilfoyle, a cable news fixture of dubious distinction, became a speaker at the Republican National Convention this year.

Up was down. Down led up.

The gulf between the personalities Mr. Trump minted and the surrogates picked by the Biden campaign to help carry his message mirrors the changing identities of the parties, said Robert George, a right-leaning professor who serves as the McCormick Professor of Jurisprudence and director of the James Madison Program in American Ideals and Institutions at Princeton University. The historically working class Democratic Party is now increasingly urban and college educated. The historically elite Republican Party, more and more, courts the working class, he noted.

Despite coddling white supremacists, Mr. Trump still sought approval from Black celebrities, including Kanye West and more recently, the rapper Lil Wayne, who said he endorsed Mr. Trump because of his stated intent to introduce a $500 billion “Platinum Plan” to help Black entrepreneurs get businesses off the ground.

Among Black activists, there was great skepticism about the plan being anything other than a cynical election ploy — and the photo op with Lil Wayne being little more than cover for Mr. Trump’s history of racist rhetoric and alleged history as a developer of mistreating Black residents at his properties.

It recalled, somewhat, Mr. Trump’s photo ops with Lynnette Hardaway and Rochelle Richardson — two Black conservatives who called themselves Diamond and Silk and uploaded videos of themselves to YouTube, in which they expressed their admiration for Trump and threw shade at Hillary Clinton.

On the surface, said Rashad Robinson, the president of Color of Change, a progressive nonprofit civil rights organization that monitors media and works closely with Hollywood, public appearances by Diamond and Silk gave people who aren’t white a degree of permission to vote for Mr. Trump.

But their real function, he argued in an interview, was to provide psychological comfort to those who are, giving them a signal that their sense of persecution at the hands of woke America was rooted not in racism but clearheadedness. They also provided comic relief at rallies that took on a Coachella for Conservatives vibe, complete with crowd surfers like Vernon Jones, a Democratic former member of Georgia’s state legislature, who did this maskless at a campaign stop in Macon, Ga., last month, as the pandemic continued to surge.

“Trump created the cult that includes people who serve as court jesters there to entertain the monarch and augment his power,” Mr. Robinson said. “The court jester is not the most talented person in the village. It’s the clown. It’s the person willing to do the ‘thing’ to serve the monarch, the folks who will say crazy stuff and say it even more crazy than Trump would.”

Of course, he noted, the people who served in this function were not just Black.

Enter Richard Grenell, a telegenic, white, openly gay, right-wing Fox News contributor who in 2017 became the ambassador to Germany after staunchly supporting the president on air. In February he was named the acting director of National Intelligence, a temporary position that nevertheless gave him oversight of the National Security Agency, the C.I.A. and 15 other government agencies.

After the election, Mr. Grennell headed to Las Vegas to help with Mr. Trump’s baseless effort to uncover widespread voter fraud. There, he was captured on camera at a news conference dressing down an MSNBC reporter, simply because the reporter asked what evidence exists to back up the president’s claims of illegitimate voting. It established him as yet another member of the ever-revolving backup band that refuses to admit a majority of Americans have pulled the plug.

But Mr. Vargas of Define American said the coming end of the Trump presidency will not mark the end of the players within it. “As much as establishment Republicans recoil at Trump, they are still being very careful about critiquing him, because doing so isn’t just a decision to go up against him,” he said. “It’s a decision to go up against this whole media ecosystem he created that’s not going away.”

11/12/2020 Fashion Comments Off on The President’s Backup Band
Recent Posts
We and our partners use cookies on this site to improve our service, perform analytics, personalize advertising, measure advertising performance, and remember website preferences.Ok