A MAN who was left paralysed after diving into a shallow pool was told by doctors that he'd never walk again.

But Chris Rice – a 26-year-old student from Canada – has defied odds by not only walking, but dancing at his best friend's wedding. 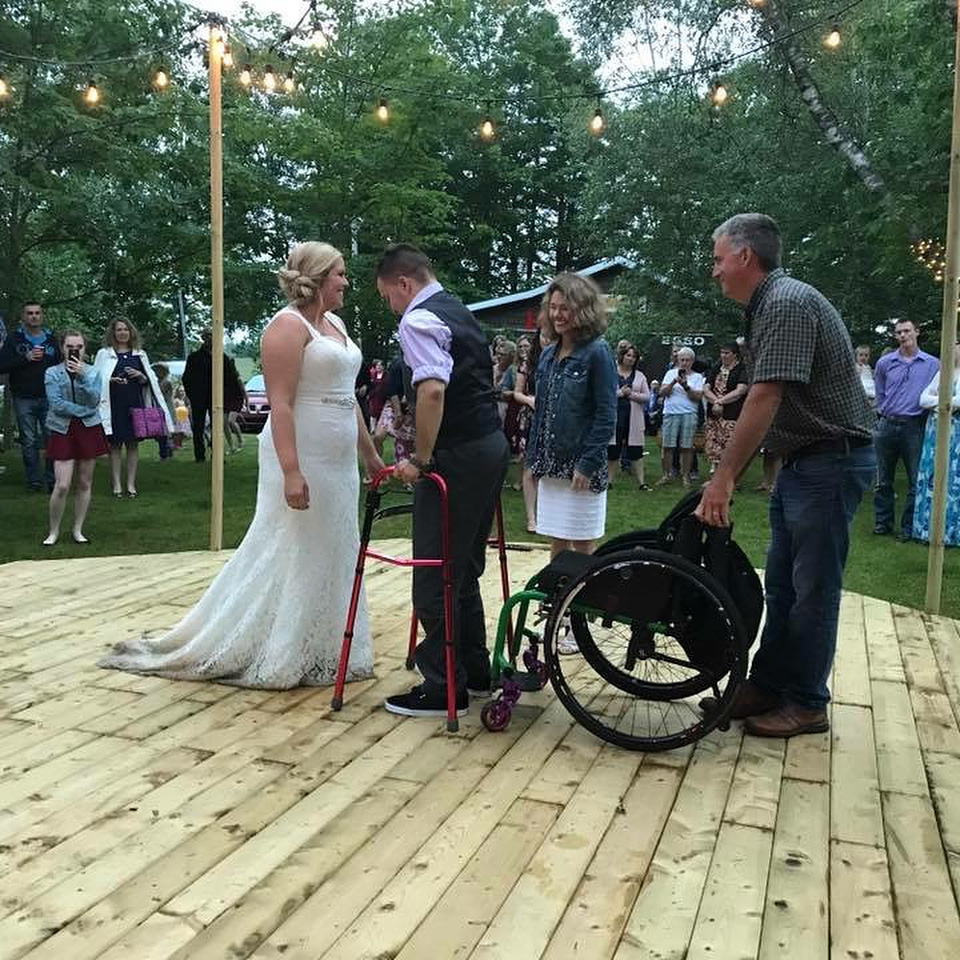 Six years ago, Chris was immediately left paralysed after diving into a four-foot deep pool, unable to move or signal for help.

Lying down on the surface of the water, Chris was unable to move any part of his body apart from his eyelids and thought he would drown, until his brother Alex rolled him onto his back just in time.

Aged just 20 at the time, the student was rushed to hospital where they discovered he had crushed his C7 vertebra. And despite surgery to replace the vertebra, Chris was told he would never walk again.

But through working with his trainer, Rebecca Wheeler, Chris has managed to regain function and has even danced for the first time at his friend’s wedding. 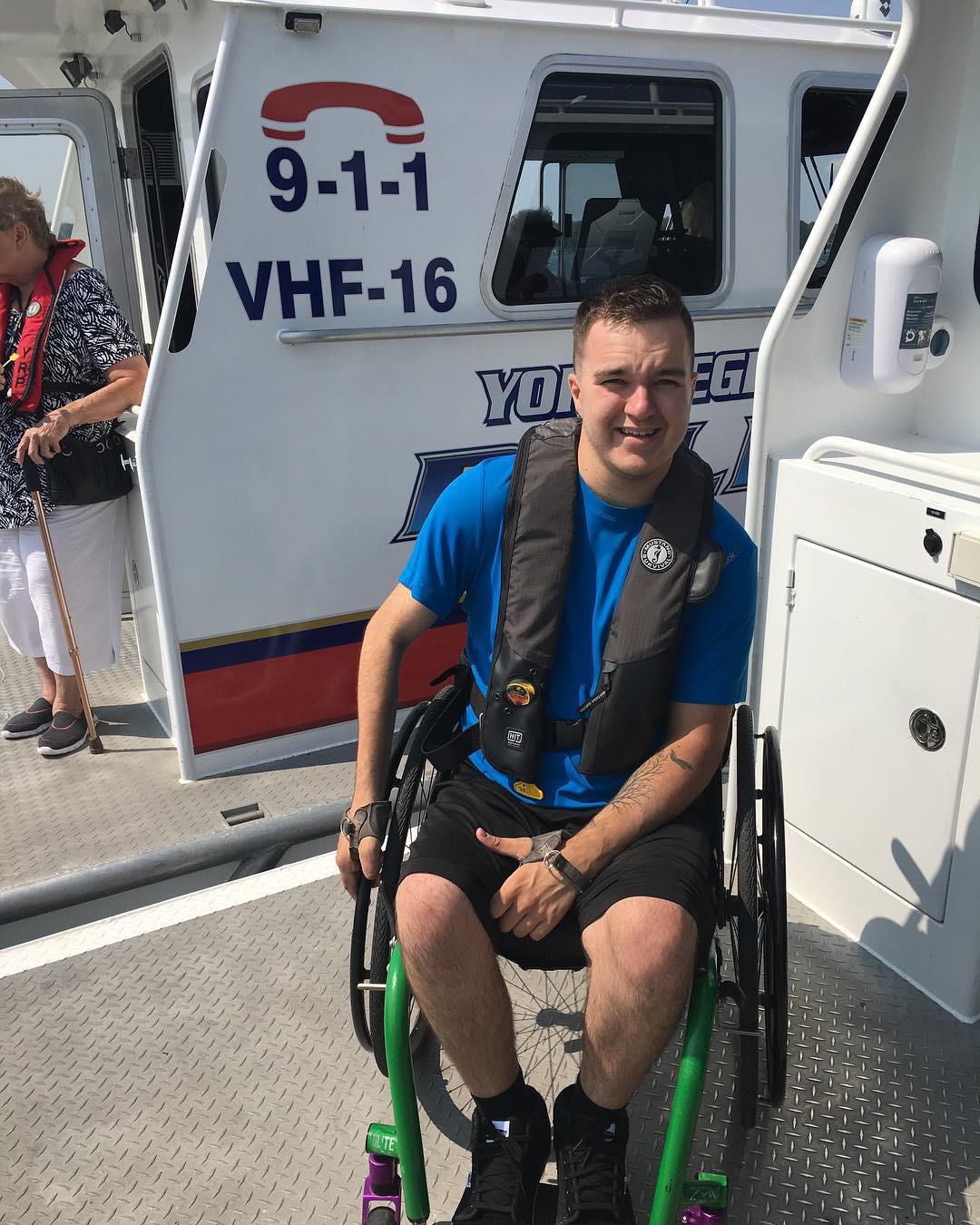 “On June 23, we spent the afternoon in the garden, swimming in the pool,” said Chris.

“One moment, I was on the deck, talking to my mum. In the blink of an eye, I was face down in the water fighting for my life.

“I dove into the pool and slammed headfirst into the bottom, crushing my C7 vertebra and paralysing myself from the chest down.

“The pool is only four-foot-deep, but I had dived in many times before from the same spot. As soon as I realised that I couldn’t control any muscles below my head, I panicked. I tried holding my breath for as long as possible, but the air ran out quickly. 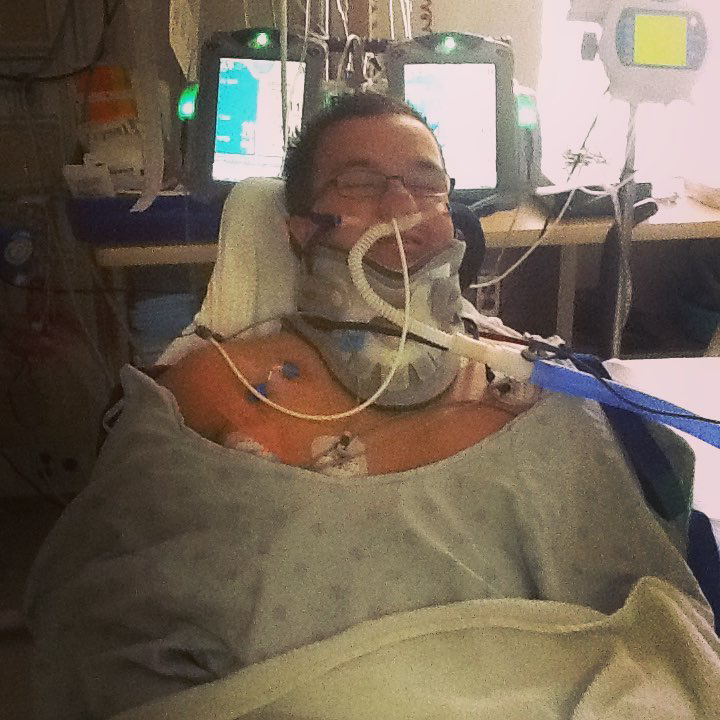 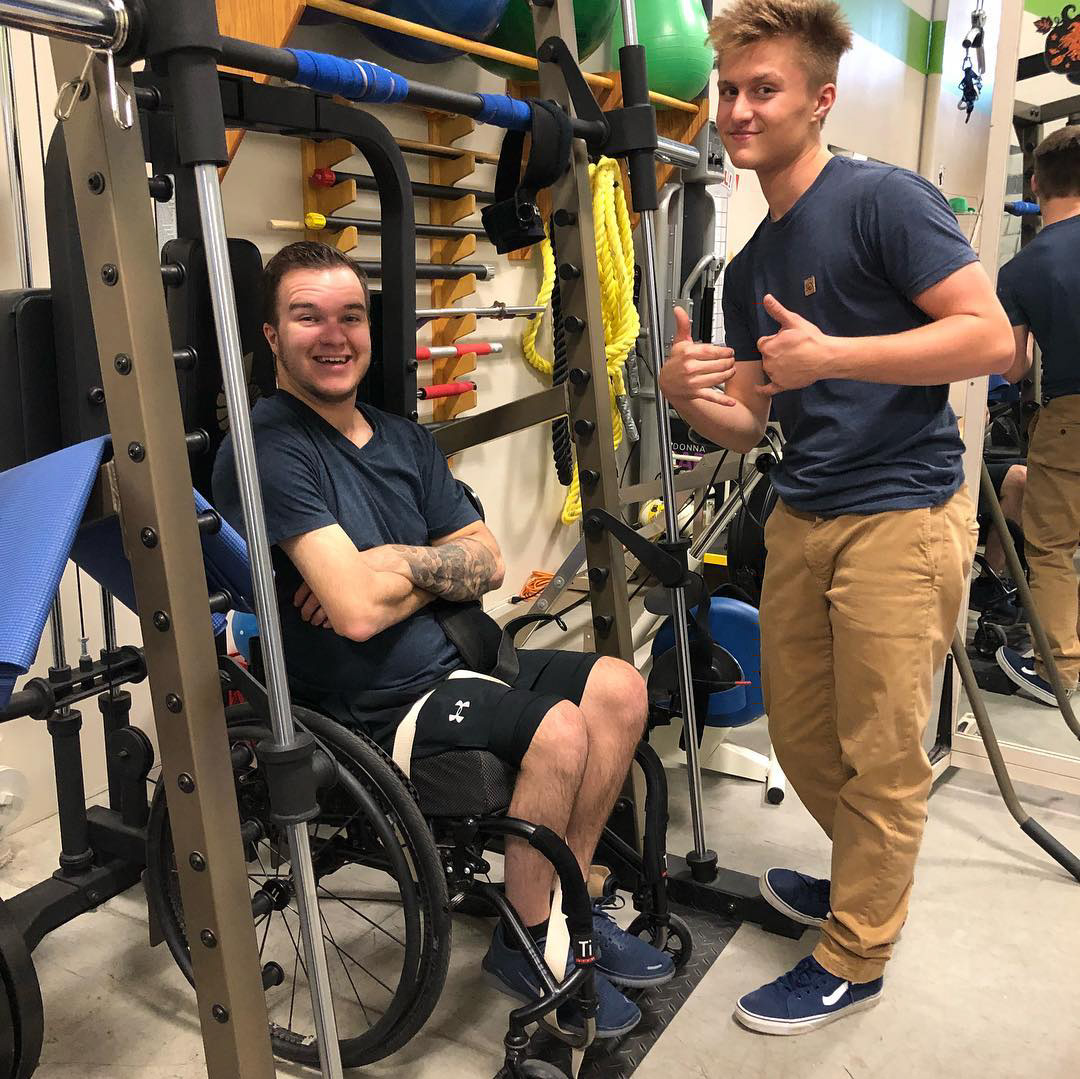 “I was completely conscious and aware of everything that was going on.

"At first, I thought I was stunned and figured after a few seconds it would go away and everything would be fine.

"When I could see my hands moving when I wasn’t telling them to do so, things got scary.

“The effort it took to not inhale water was extreme. My mouth was open, face and neck muscles clenched, trying with every ounce of my strength not to let things end that way.

“Luckily, I was floating on the surface of the water so when my brother realised that I was facedown for too long, he came over to roll me.

"The entire time I was almost drowning, I could see his feet just out of reach, but I couldn’t do anything to get his attention. If it wasn’t for him, within a second or two I would have drowned. 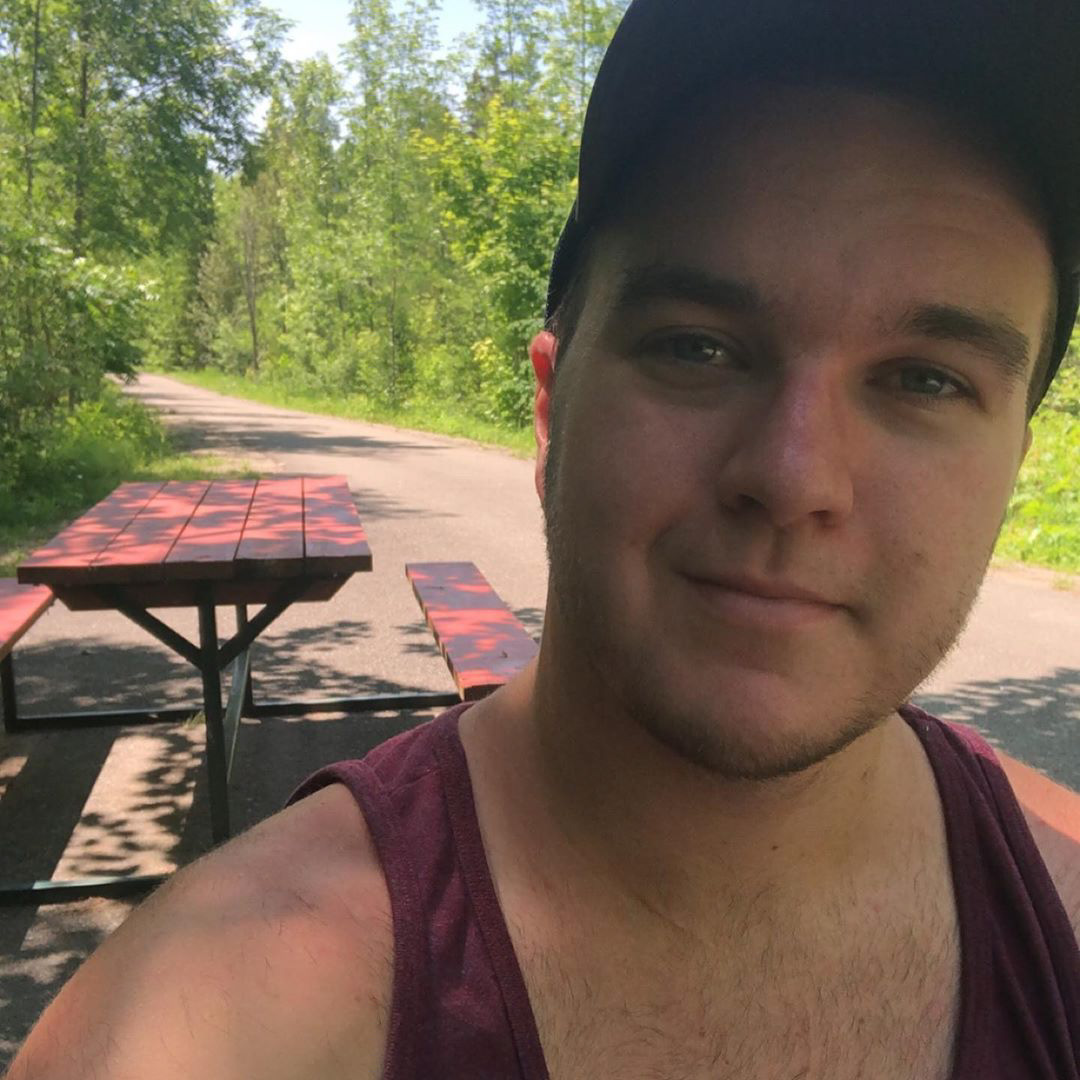 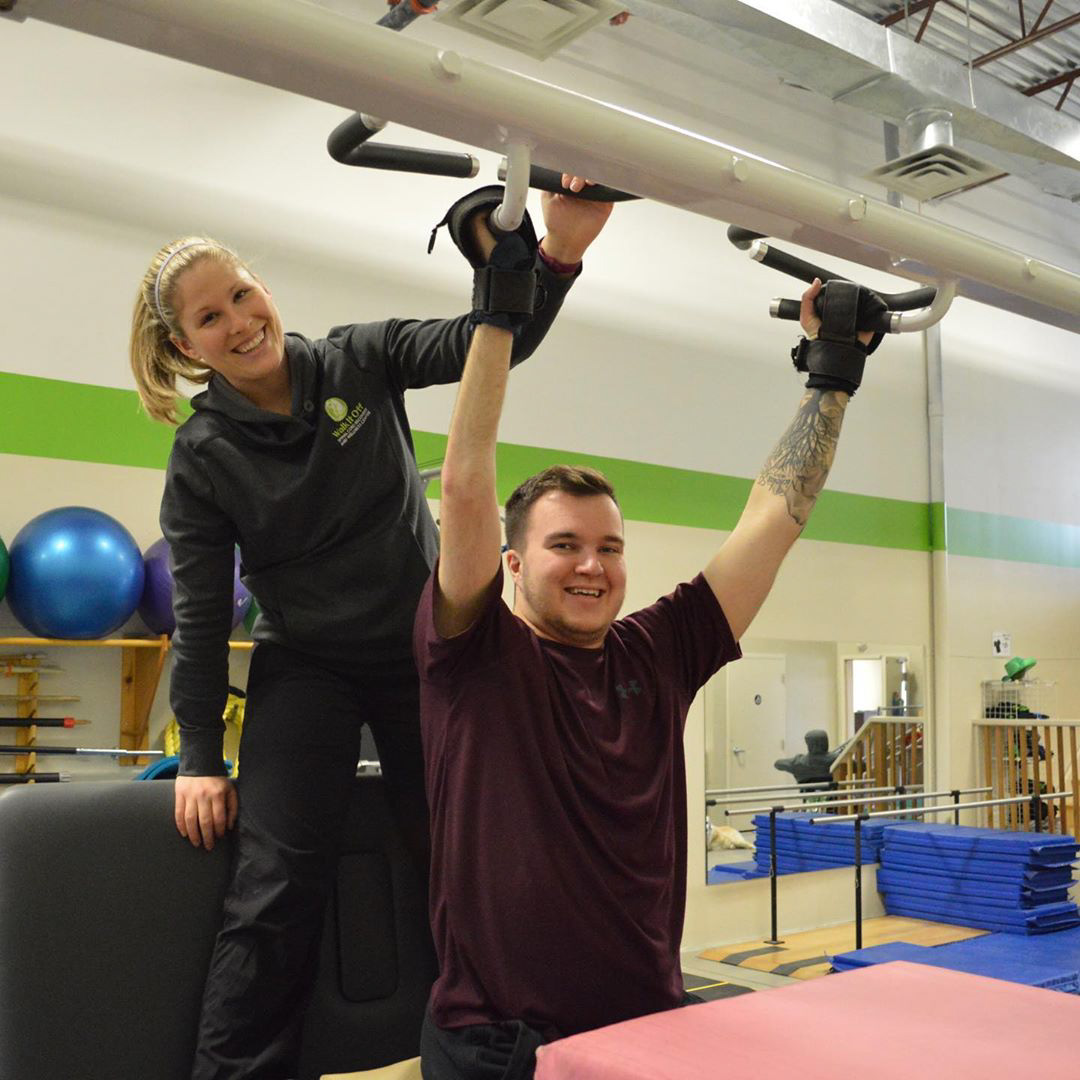 “I was face down for about 45 seconds, but once I was rolled over, my stepfather leaned me back against his chest to support my head. We called an ambulance and within minutes, firefighters and paramedics arrived and jumped in the water.

“After about 10 minutes, I was being lifted out on a blackboard. The total time spent in the water was about 20 minutes.

“All I can recall is the paramedics asking if they could cut my shorts off. Fortunately, I was able to say with confidence that they could because I needed a new pair anyway.

"When my mother asked a nurse how I was doing, she inappropriately told her that I was completely paralysed and would never walk again.

“Waking up the next day, I was told that my surgeon had gone into my hip and removed a small portion of bone from my pelvis to use as a graft. 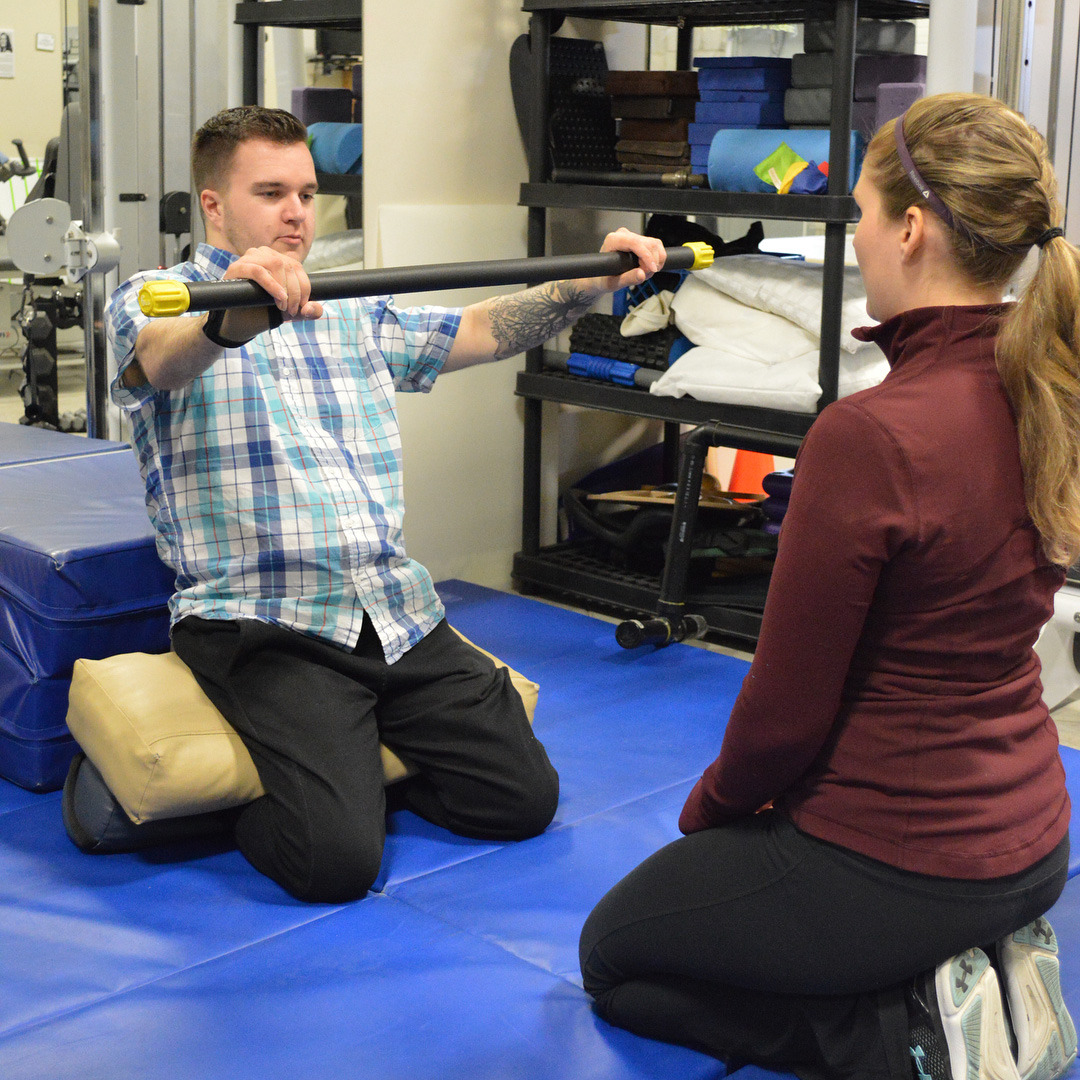 "Then they replaced the crushed portion of my C7 with a metal plate and used four long screws to fuse my neck to the vertebrae.”

Chris stayed in that hospital for five months where he did light physiotherapy and some motion exercises, however he didn’t regain function for a year after the accident.

After being discharged, Chris came across the rehabilitation facility, Walk It Off, where he has since spent 1,700 hours retraining his muscles and increasing his strength.

“Physically, my recovery was slow because of the nature of my injury and because I didn’t start regaining function until a year after it happened.

"Mentally, things were extremely difficult. While lying in a hospital bed at night, unable to even get up for a walk, your mind goes a bit crazy.

“I started thinking about how much of a burden I would be and that maybe I should find a way to end my life.

"I started focusing on the things that I would never be able to do again, and how people would look at me.

"This lasted for about four months and delayed my motivation to start healing. It was easy to believe that recovery wasn’t possible.

“In the rehabilitation hospital after my surgery, light physiotherapy and motion exercises began. After five months of being an inpatient, I was discharged from the hospital and sent home. 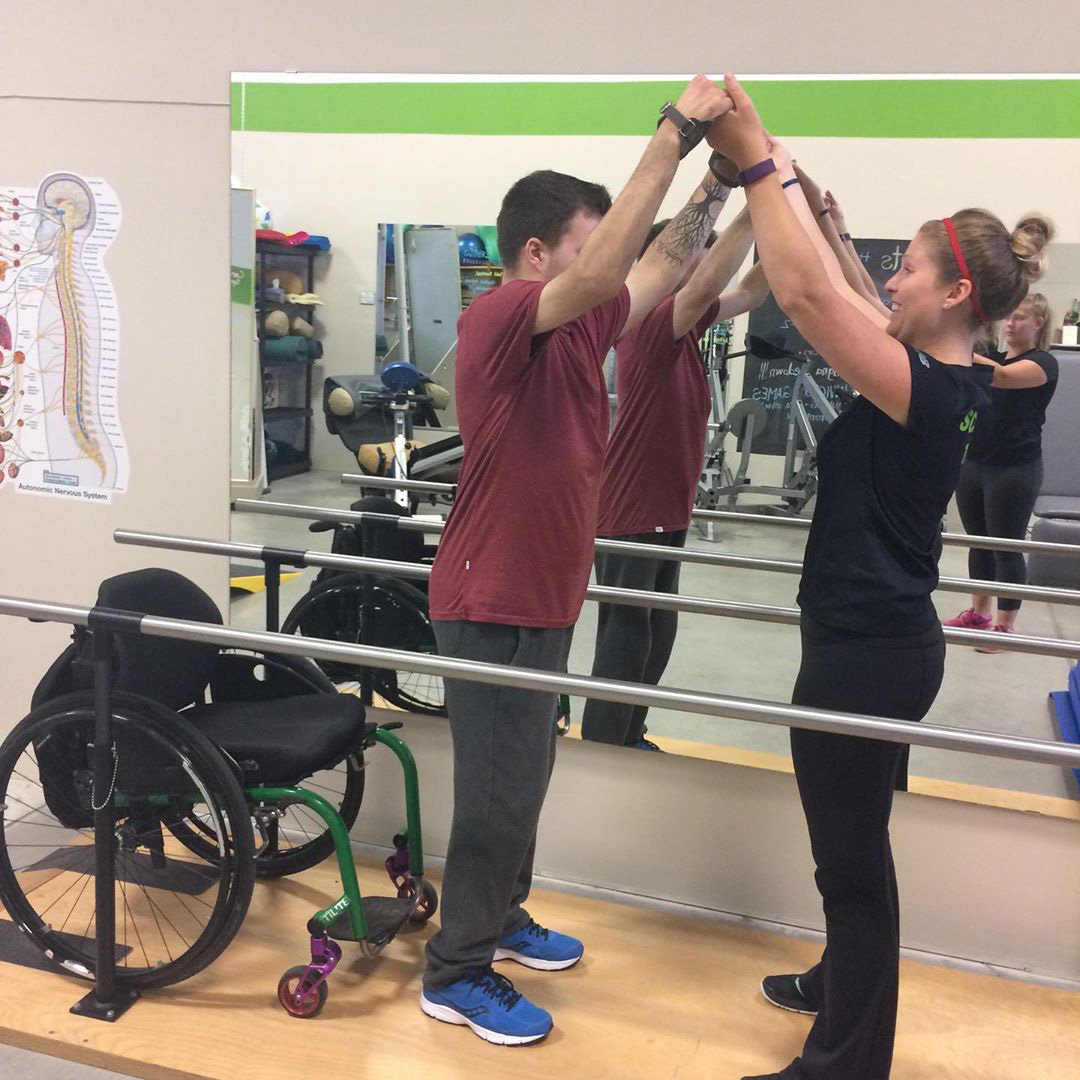 “I was lucky to find a facility called Walk It Off Recovery where I’ve been working for over six years and owe them everything.

"My main trainer, Rebecca Wheeler, has been the most important person in my life for the past five years.

“I’ve spent over 1700 hours trying to retrain the muscles below my chest.

"We are trying to re-wire our brains, to find new pathways to activate muscles.

"We are thinking about activity in ways that are difficult to imagine.

"To lift my foot, I had to focus on which individual muscles needed to fire in order to do that action. It’s all about repetition, so after thousands of attempts, it starts to become natural again." 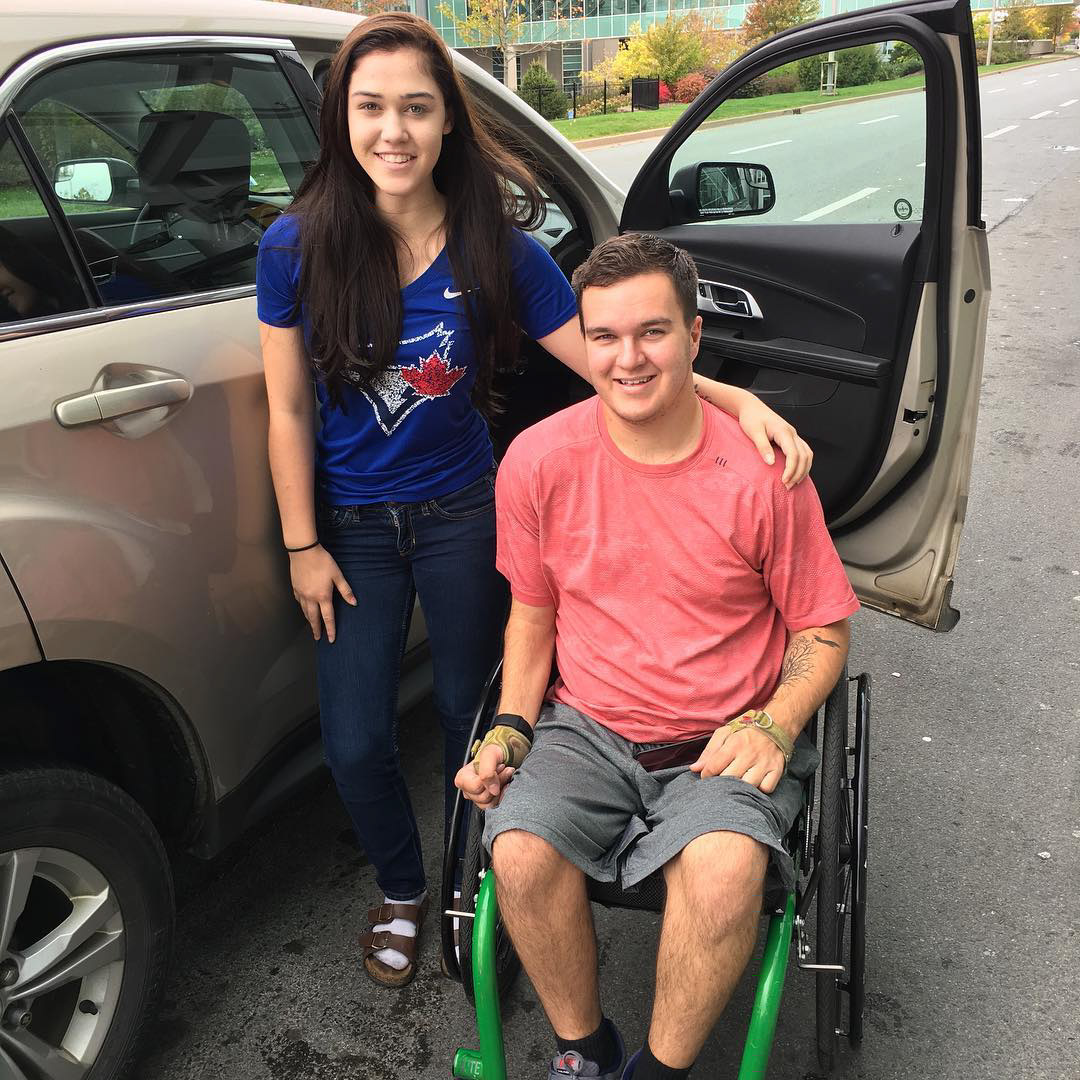 And after being able to regain function, Chris was able to dance with his best friend at her wedding in 2017.

“I was man of honour at my friend Kate’s wedding in 2017 and danced for the first time.

"At the time we danced, I was too busy focusing on not falling or losing my balance as one of my biggest struggles is muscle spasms.

“When the song ended, I sat back in my wheelchair in shock at what we had just done.

"It wasn’t until later that night when I was lying in bed, that the emotion started really flooding in.

"I was lying in bed by myself, with tears streaming down my cheeks. After five years of hard work, being told by professionals that I would never walk, I had defied the odds.

“Enjoy life while you have it, we’re not here for very long. If things went any differently that day in 2012, I wouldn’t be here right now.

"I still have bad days, but I try to wake up the next morning and start fresh.

“The journey is never over; I’m always going to be pushing my limits and fighting to regain whatever I can.

"I still have a long way to go and there will always be something to work on, but that’s part of the joy in life.”

In other wedding news, we told you how one wedding photographer calls for a ban on guests using phones to take snaps after perfect pic of the bride and groom is ruined.

And we showed you wedding guests were left ‘disturbed’ as the groom’s mother ‘spooned’ him during the official family photos.