I rewatched the original Sex and the City recently, and when Carrie Bradshaw makes a joke about Birkenstocks being a lesbian shoe, I couldn’t help laughing at how old-fashioned she sounds.

Of course the show has dated – it was first released over 20 years ago and mainstream attitudes towards sexuality, politics and so much more have changed since then. Back in the Noughties, Miranda was allowed to complain endlessly about moving to a brownstone in Brooklyn… But little did Carrie know that those Birkenstocks she was maligning would end up being far more fashionable than the colourful heels she based so much of her personality around. 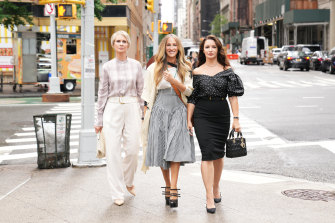 Cynthia Nixon as Miranda Hobbs, Sarah Jessica Parker as Carrie Bradshaw and Kristin Davis as Charlotte York in And Just Like That. Photo: HBO MAX/Binge.Credit:HBO MAX/Binge

The world of women’s shoes has experienced a footwear revolution in the last few years – one that has arguably had as much of an impact as the hemline rising of the 1960s. Gone is the expectation that in order to look either attractive or professional, women need to be tottering around in six-inch heels. In fact, in the boardrooms, bars and boutiques of the most stylish cities in the world, you’ll see more biker boots, tasselled loafers, ballet flats and expensive trainers than ever before.

So imagine my surprise when, during an episode of And Just Like That, the same old joke was wheeled out again. Well, sort of. There was less of the casual homophobia, unsurprisingly, but just as much distaste for anyone un-heeled.

While following an oblivious Natasha, who is played by Bridget Moynahan, Charlotte turns to Carrie and Miranda and says, “Urgh, and she’s wearing flat shoes”. To be fair, the other two women do roll their eyes and say it’s not much of an insult, but the implication is still there that heels are somehow superior to anything flat.

For years, Sex and the City fed us the line that to be a glossy Manhattanite was to wear skyscraper stilettos to every occasion. Thanks to the costume designer Patricia Field and star Sarah Jessica Parker, vertiginous heels became bywords for sex and power and remained so until the footwear revolution of the past few years.

The show burst onto the cultural scene when I was a teenager, and its ubiquity meant that for many girls of my generation, glamorous womanhood became indelibly linked to high-heel wearing. We saved up our money to buy stilettos for student parties, and bought even more pairs to wear for our first jobs, convinced that tottering into the office gave us an aura of gravitas. Always with us, like an adult security blanket, were a pair of battered ballet flats for when the pain became unbearable.

But then the generation below me came out into the world and made it clear that feeling comfortable was as important as looking good. Watching And Just Like That post-lockdown has made me realise all over again just how right they were – mostly because nobody should ever equate confidence with sore feet.

“I think for Gen Z at least, this shift is here to stay,” says Mary-Leigh Bliss, the chief content officer at Ypulse, a youth marketing research firm in New York. “Just anecdotally I can say that going into a Manhattan or Brooklyn bar now feels completely different to how it did a decade ago because all the women are in flats – and the figures from our surveys reflect that.”

“Gen Z and younger Millennials prioritise comfort above all else and I don’t see them ever embracing stiletto culture,” she continues. “That attitude has affected older women as well, who are realising they don’t have to put themselves through the pain. With the rise of dad shoes and sneakers, we have seen a new culture grow, with young consumers saying they have fatigue with perfection.” 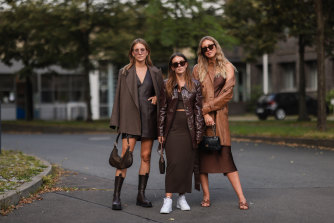 Flat, comfortable footwear, as seen here on attendees of Berlin Fashion Week in September, are now all the rage.Credit:Getty

Back in the Noughties, Carrie did look undeniably gorgeous teetering down the streets of Manhattan in her Manolos. In 2021, she still does. But does her determined adherence to wearing heels whether she is going for a walk in the park or to a funeral home the day after her husband’s death make her seem (whisper it) a tiny bit old-fashioned? A shame, really, as the show always used to be so culturally advanced.

“The idea that you have to dress differently when you age is a false one,” says Danny Santiago, a costume designer for And Just Like That, who I interviewed last week. “The girls have this very individual style, and so we thought, ‘Why would they lose that?’. If anything, as you get older your eye gets sharpened and you really learn what works for you and looks good. We took three women who already had a very distinct style and made them even more confident.”

The point is an important one: the team wanted to show that while women’s lives can change radically between their 30s and their 50s, their dress sense doesn’t have to. But trends will always evolve, and there’s no chance that a self-proclaimed fashion obsessive like Carrie Bradshaw wouldn’t have noticed the footwear revolution that had taken place under her nose.

Make the most of your health, relationships, fitness and nutrition with our Live Well newsletter. Get it in your inbox every Monday.

12/26/2021 Fashion Comments Off on Why is Carrie Bradshaw still so wedded to her stilettos?
Recent Posts