One Amazon reviewer was left very disappointed by a new novel that’s set partly in the year 2020 — because the author makes no mention of the coronavirus pandemic.

Legge complained that she understands that Taylor wrote the book before the pandemic hit, but that she still found the author’s ‘assumption that summer 2020 would be just like other summers’ to be ‘disturbing and distracting’ — a criticism that has been met with mockery on Twitter, 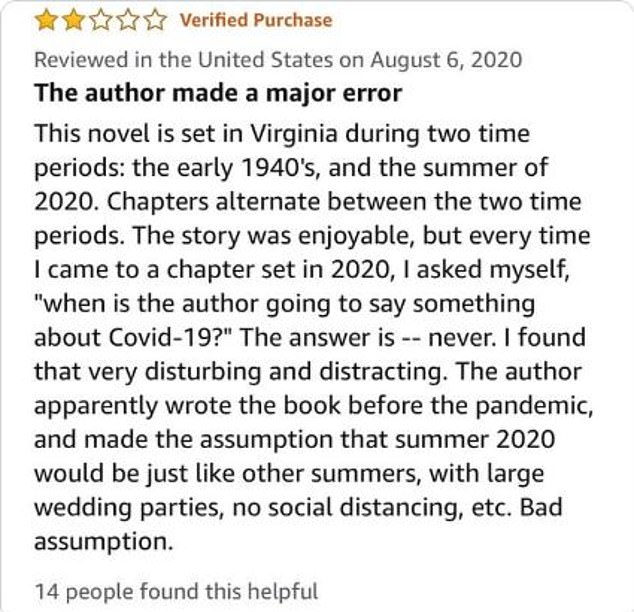 Legge seems to have liked the novel otherwise — but she was upset enough that it didn’t reflect the unpredictable and unprecedented reality of 2020 that she gave it just two stars out of five.

‘The author made a major error,’ she titled the review. 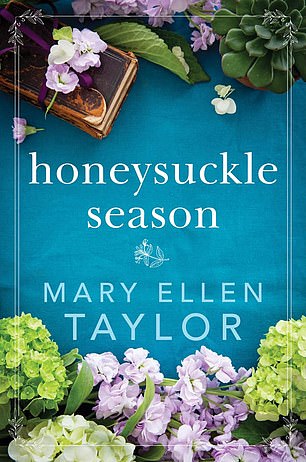 Production schedule: Honeysuckle Season by Mary Ellen Taylor, came out on September 1 — but it was written before the pandemic

‘The story was enjoyable, but every time I came to a chapter set in 2020, I asked myself, “when is the author going to say something about Covid-19?”

‘The answer is — never. I found that very disturbing and distracting.

‘The author apparently wrote the book before the pandemic, and made the assumption that summer 2020 would be just like other summers, with large wedding parties, no social distancing, etc. Bad assumption.’

The book is otherwise averaging 4.5 stars, with 1,474 ratings on Amazon.

But it’s Legge’s bizarre review that is going viral.

‘Authors don’t have a crystal ball when writing about the future, apparently. DISGRACEFUL,’ tweeted Essex-based Twitter user @KateOfTarragon, sharing a screengrab of the review.

‘[The reviewer] obviously thinks books are written in real time, before their very eyes,’ she added.

Her tweet has gone viral, with nearly 15,000 likes so far and lots of comments.

‘How dare you not consult the oracle first??’ joked one more.

‘I made the same assumption about summer and am also upset,’ quipped yet another person.

Some made suggestions of other stories that would blow the reviewer’s mind, like 1984 and 2001: A Space Odyssey. 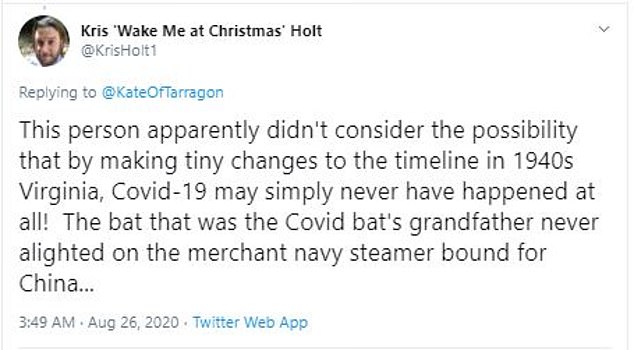 Aw, man! The review has gone viral, with one man quipping that he, too, is upset that the summer turned out differently than he expected

‘This person apparently didn’t consider the possibility that by making tiny changes to the timeline in 1940s Virginia, Covid-19 may simply never have happened at all! The bat that was the Covid bat’s grandfather never alighted on the merchant navy steamer bound for China…’ suggested another commenter.

At least one man gave Wegge the benefit of the doubt, saying that it seemed ‘obvious’ to him that the review was supposed to be a joke — but an ‘incredibly inconsiderate one,’ since the reviewer still gave the book just two stars, bringing down the book’s overall rating.

However, a glance at the rest of the user’s Amazon review history makes it less ‘obvious’ this is a joke, as her other book reviews are all honest and straight-forward.