I’ve been single a long time.

Long enough that I have a recurring nightmare about a man moving into my apartment, rearranging my furniture and cluttering up my wardrobes. 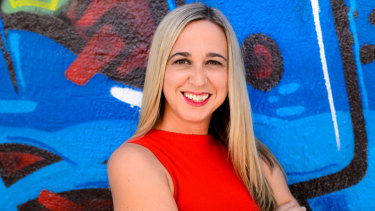 I’m so used to my own space that the thought of giving it up is almost unfathomable.

There is much I enjoy about being single and child-free — the freedom to make my own choices; the self-reliance and emotional resilience I’ve worked hard to cultivate; unfettered time for quiet reflection, to name a few.

Sometimes I miss the perks of a relationship but for the most part, life is rich and meaningful and I’m lucky to be surrounded by people I love, who love me back.

There is much I enjoy about being single and child-free — the freedom to make my own choices; the self-reliance and emotional resilience.

Until someone points out that it is. At a party recently, I had a conversation with a married man who asked if I too had a partner.

When I said no, he cocked his head sympathetically and replied, “Oh, I’m sorry to hear that. I’m sure someone will come along if you keep looking.”

I told him I wasn’t looking. He was baffled. “But don’t you want to settle down? Find someone to spend your life with?”

That I could be settled on my own was, it seemed, impossible.

Why is it so hard to believe that a single, childless woman in her 40s might be fulfilled?

While we may have moved on from the "spinster" label once given to unmarried women, there remains an unhealthy perception that to be unpartnered is to live in a state of suspended animation, anxiously waiting to find "the one" so real life can begin.

It’s an unhelpful stereotype that downgrades the lived experience of many single people.

In a romance-obsessed world, where our accepted life narratives are partnered and happy or single and searching, admitting you’re happy alone can feel like an act of defiance.

That’s why I found myself silently fist pumping the air last week when I read of new research that found the healthiest and happiest of any population subgroup are women who have never married or had children.

Not because I believe that this is necessarily a better way to live, but because finally I was reading something that celebrated my existence rather than erased it.

Speaking at a festival in Wales last month, Paul Dolan, a professor of behavioural science at the London School of Economics, said new data revealed that single, childless women are not only happier than those with partners and kids, they also live longer.

He found that for men — who generally take more risks when single — marriage could have a ‘calming’ effect, improving their health outcomes.

But for women, there were no health benefits to having a partner, and for middle-aged women in particular, they were at greater risk of physical and mental illness than their single peers.

When the burden of childcare and domestic chores in heterosexual relationships still disproportionately falls to women, it’s perhaps an unsurprising finding.

Dolan said: “You see a single woman of 40, who has never had children – ‘Bless, that’s a shame, isn’t it? Maybe one day you’ll meet the right guy and that’ll change."

Advertising, women’s magazines, and a booming dating industry rely on us believing that being single is social suicide — an aberrant state to be rectified at all costs.

And while Instagram influencers might be big on self-empowerment, they remain wedded (pardon the pun) to the notion that "follow your bliss" means seeking contentment in coupledom.

It’s not being single that makes you sad — it’s the sense of shame that society saddles you with because of it.

Dolan’s data found that, like a growing body of happiness research, equating marriage and children with life success can leave many single women feeling dissatisfied.

It’s not being single that makes you sad — it’s the sense of shame that society saddles you with because of it.

But perhaps most interestingly, Dolan noted, “Married people are happier than other population subgroups, but only when their spouse is in the room when they are asked how happy they are. When the spouse is not present: f—ing miserable.”

I suspect many couples can relate. The loneliest I’ve ever been, was in a disintegrating long-term relationship that had run its course but which neither party had the courage to leave.

My friends with partners and children undoubtedly enjoy benefits that I don’t – companionship, financial support, the incomparable bond between parent and child.

But they also face ongoing pressures that I don’t have to manage — relationship conflict, sleepless nights and the stress of being responsible for keeping another human alive.

There are many ways to live a fulfilling life and none is perfect or without its challenges.

Perhaps it’s time to retire the outdated, "happy ever after" fairytale and start celebrating all of our life stories – single, partnered or somewhere in between.

Jill Stark is a regular columnist and author of Happy Never After: Why The Happiness Fairytale Is Driving Us Mad