Melbourne's booming outer suburbs, including areas such as Point Cook, Cranbourne, Craigieburn and Lilydale, will need 250 to 350 new schools within the next 10 years or face cramming 150,000 extra students into increasingly overcrowded campuses, 10 councils have warned.

The growth area councils said the government’s broken funding promises and a lack of proper planning have left a "critical undersupply" of schools in communities that would host more than half of Melbourne's population boom in the next decade. 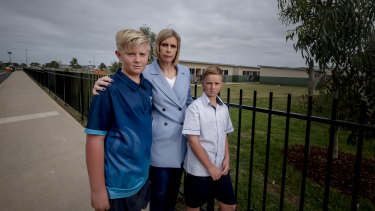 Interface Councils represents 10 shires that form the urban ring around Melbourne, an area that housed 1.6 million people in 2016, a figure forecast to almost double by 2041.

Cr Karen Egan, mayor of Nillumbik council and chair of Interface Councils, said the area already suffered from poor education outcomes compared with the rest of Victoria, exacerbated by an “alarming shortage” of high schools.

As part of their submission to a state government inquiry into school infrastructure, the councils said many schools have had to build portable classrooms on school ovals – reducing sport opportunities – or on neighbouring council land.

Mitchell Shire, north of Melbourne, says just one secondary school is built for every three primary schools in the area. Wyndham Council, in Melbourne’s west, said it would require 12 extra schools by 2041 that are yet to be planned for.

Sam Gercovich's sons, Ollie and Tom, were in years 5 and 6 when they moved to Point Cook, in Melbourne's south-west, in July 2018, with nearby Saltwater P-9 College then under construction.

“We also had a 10-12 college nearby, so, we thought fantastic, we’re sorted for our schooling life,” she said.

While Saltwater College’s P-6 facilities were already in place, last year Ms Gercovich received a call from the school principal revealing the school hadn’t received funding to build its years 7 to 9 facilities.

Their only local year 7 option was Alamanda College: a school in Wyndham Council that, since opening in 2013, has expanded from 370 to more than 2500 students, making it the second largest public school in Victoria, packed with portable classrooms.

“We couldn’t send our son to Alamanda, he would have just got lost in the crowd. In year 6 his class already had 43 students,” she said.

Ms Gercovich scrambled to find a school for her older son Tom, 13, who this year started year 7 at Bayside College in Williamstown.

Education Minister James Merlino said the government annually reviews the need for new schools and is supporting students at Saltwater P-9 College to enrol in a secondary school in the area.

“We know Victoria’s population is booming and that’s why we are building 100 new schools by 2026,” Mr Merlino said.

Cr Egan called on the government to liaise more with local councils in planning schools further in advance.

“We recommend early land acquisition and a depoliticisation of triggers for new school as part of this solution,” she said.

Related posts:
03/27/2020 Lifestyle Comments Off on ‘Alarming shortage’: Councils push for 350 new schools in booming suburbs
Recent Posts
We and our partners use cookies on this site to improve our service, perform analytics, personalize advertising, measure advertising performance, and remember website preferences.Ok