Warning: this story contains major spoilers for the third episode of And Just Like That…

Three episodes in and we can all agree that And Just Like That… has asked us to give up a lot. We knew going in that there would be a Samantha-shaped hole in this series, but her poorly executed exit made it harder to accept. And yet, we soldiered on. 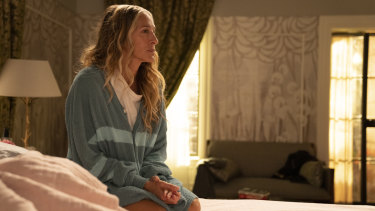 Three episodes down and still no sex in this city. Credit:HBO MAX/Binge

Then it was on your bike for Mr Big (Chris Noth), his now infamous death triggering equal waves of audience trauma and corporate brand damage. For the record: all is forgiven between Big and Peloton; they even made a cute ad!

Throw in the unexpected loss of Stanford in episode three, as a result of actor Willie Garson’s passing in September, and – just like that – this might not feel like the show you once loved.

But for all the familiarity we’ve had to sacrifice, for all the accommodations we’ve been prepared to make (why is Miranda, a lifelong New Yorker, suddenly so awkward around black people?), the greatest sin And Just Like That… has committed is depriving us of sex.

After three groan-inducing (and not the good kind) episodes of And Just Like That…, we are very much sexless in the city. It seems the show is treating sex in much the same way it dealt with the COVID-19 pandemic: it’s mentioned but only in the past tense.

Midway through the most recent episode, Charlotte (Kristin Davis) and Miranda (Cynthia Nixon) are sitting at a cafe discussing whether they should share a blueberry muffin when the conversation finally, mercifully, turns to sex.

“You and Steve, how are things?” asks Charlotte, which is the most Charlotte way of broaching sex over brunch. Never one to mess around, Miranda is suitably dry about her dry spell. “No sex for years,” she says. 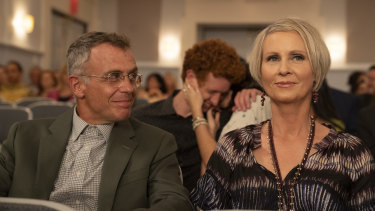 The look of love? Steve (David Eigenberg) and Miranda (Cynthia Nixon) haven’t had sex in years. The same can’t be said for their son, Brady (Niall Cunningham).Credit:HBO Max/Binge

As for Charlotte, who seemed the most prepared for middle age even when the characters were in their 30s, sex is barely discussed. Instead, marriage with Harry (Evan Handler) is an endless loop of scheduling dinner parties and rescheduling colonoscopies.

So, how does a show that previously explored sexual experience with such rigour lose its sex appeal completely? We’ve skipped missionary and gone straight to omission.

The obvious answer is that there can be no sex in the city without Samantha Jones (Kim Cattrall).

She was the self-described ‘tri-sexual’ (“I’ll try anything once”), and through Samantha, Sex and the City could break boundaries on television and establish itself as an authority on the female sexual experience. While the other girls were sipping cosmos and failing the Bechdel test, Samantha was educating a generation of viewers about the importance of Kegel exercises.

Losing Cattrall meant losing a character who would’ve kept the conversation of sex on the table. With Samantha gone, Carrie, Miranda, and Charlotte have become afraid of the very same subject they used to feast upon.

The lack of sex in And Just Like That… reflects a broader issue: creator Michael Patrick King seems to have confused getting older with being old. From the minute we rejoined Carrie, Charlotte and Miranda, it felt like the three women had been frozen in time. Everything was new and scary, and remind me, what’s a podcast?

It’s as if they had all stopped learning, growing and, apparently, having sex following the 2004 finale. Thrown into the harsh reality of 2021, they are reduced to doddering seniors constantly ill at ease with the world they’ve woken up in.

The cultural legacy of Sex and the City will keep most of us hanging around for 10 episodes, so things might yet turn around. 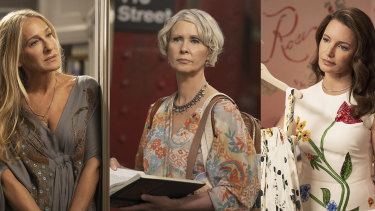 Sex and the City or Arrested Development? The cast of And Just Like That have struggled to adapt to life in 2021. Credit:HBO Max/Binge

“Is that where you blow the smoke into my mouth?” asks Miranda, and Che nods before transferring the smoke.

The scene crackled with the kind of electricity we’ve come to expect from these characters: the music, the tension – it signalled the beginning of something. And just like that, maybe someone is about to have sex in this city.

And Just Like That is available on Foxtel and Binge.

12/16/2021 Lifestyle Comments Off on And Just Like That: three episodes in and still no sex in this city
Recent Posts