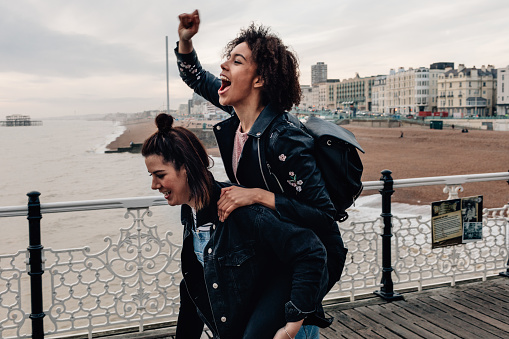 Remember ‘How I Met Your Mother’?

The less said about its horrible ending, the better, but it did introduce us to a lot of relatable concepts that help define our day-to-day lives.

One of these is ‘revertigo’ which, as explained by Jason Segel’s character Marshall, is a phenomenon where ‘when you’re around people from your past, you start behaving like them’.

Sure, we shouldn’t be taking any psychology lessons from the TV, but ‘revertigo’ actually has a technical name in psychology; associative regression.

As the name implies, associative regression describes a temporary behavioural and language-based regression that’s influenced by the people you are associating with at that time.

So, for example, if you’re meeting up with a friend from school, you might find yourself regressing into your Year 10 self, acting a lot less mature than you may do with friends you met slightly later on in life.

In order to discover why exactly we feel compelled to this, we spoke to therapists Sally Baker and Caroline Plumer.

According to Caroline, it’s all linked to our desire to fit in.

She told Metro.co.uk: ‘As humans, we naturally seek to fit in – we want to belong to part of a social group,’ she explained.

‘This may very well be the reason that when we meet with old friends we revert to the ‘old’ version of ourselves; we have no guarantee that our current self would be accepted, so we opt for what feels emotionally safe.’

In part of this desire to feel ’emotionally safe,’ some people may understate or scale down significant career or life achievements, Sally added.

‘People who feel they’re more successful than their old friends might well okay down their achievements, salary scale, or status in an effort to be the person they used to be,’ she said.

According to Sally, its ‘human nature’ to want to reconnect with people from our past — especially if we had positive experiences with them.

As part of this desire to reconnect with people from our past, Sally says that we may want to ‘reassure them that we’re the same now as we were then.’

The ‘quickest’ way for us to give this reassurance, she added, is to ‘adopt old patterns of behaviour.’

‘This can happen on many levels, including adopting previous, long lost and outgrown accents or inflection,’ she explained.

But what about the people in our past we don’t like, with whom want nothing more than to not reconnect with them?

In this case, Sally told Metro.co.uk, the opposite happens.

‘Status or a new metropolitan way of speaking would be actively displayed as a barrier to avoid similarities,’ she said.

It’s frustrating to feel like you’re sliding backwards – especially if you’ve made efforts to change from who you were in the past.

However, acting carefree or a little childlike from time to time doesn’t undo your hard work. Try to see harmless regressive behaviours as a form of nostalgia rather than a sign of emotional immaturity. Let your hair down.

If you’re noticing this associative regression triggers behaviours that are particularly negative (such as bullying or arrogance) these should be dealt with.

Practice really makes perfect when it comes to reprogramming your habits, so try to be aware of how you act when you’re around certain people. Each time you find yourself getting caught up and acting out, stop yourself in your tracks.

Through time and repetition, it’ll be second nature to be the person you are now, not who you once were.

05/14/2022 Lifestyle Comments Off on Associative regression: Why we act like our younger selves with old friends
Recent Posts