Australia has raided 500,000 doses of Pfizer from a scheme set up to ensure poorer countries receive fair and equitable access to vaccines, as low and middle-income nations still wait for vaccines.

The Australian government in June purchased 25 million doses out of the global COVAX facility as it scrambled to source more supplies of the Pfizer vaccine and received about 500,000 doses from that order – double what the entire continent of Africa received under COVAX in the same month. 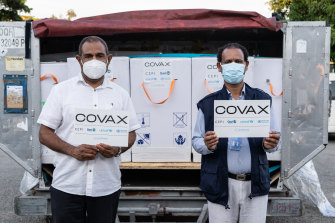 Doses of the AstraZeneca vaccine landed in Port Moresby under the COVAX facility.

Under the World Health Organisation-run scheme, rich countries such as Australia provide money to ensure vaccines can be set aside for poorer nations. But under a second stream, countries including Australia, Britain, Canada and New Zealand have also dipped into the scheme to purchase vaccines on the basis that their domestic supplies have fallen short of expectations.

In the same month that Australia made its mammoth purchase, Britain also received about 530,000 doses from COVAX.

After receiving a significant amount of criticism for dipping into COVAX, Canada has promised not to request any additional shipments through the facility.

Australia has committed a total of $130 million to COVAX to go to countries in the region, and has also provided additional AstraZeneca doses to nations including East Timor, Fiji and Papua New Guinea.

Australian Council for International Development chief executive Marc Purcell said Australia would never be able to recover from COVID-19 and reopen its borders until developing nations were also vaccinated.

“There’s obviously been a desperation to get the preferable vaccine, Pfizer, from any sources into Australia,” he said.

“But we can’t forget that our fortunes are tied up with reducing and eradicating COVID in the developing countries that surround Australia.

“The COVAX facility is open to countries in genuine need, but clearly countries like Indonesia, Philippines and Malaysia should be a priority for donors like Australia.”

Tensions over the purchases by wealthier countries were partly to blame for a temporary breakdown in negotiations between Pfizer and COVAX earlier this year, according to a report in The New York Times. Pfizer wanted new doses to go to poorer nations alone, but COVAX was insisting on fulfilling orders to rich countries such as Australia that had begun buying directly at higher prices.

The original COVAX objective was to deliver two billion doses of vaccine worldwide by the end of 2021, but it is about half a billion doses short of its goal.

Health Minister Greg Hunt has briefly mentioned COVAX as a source of vaccines in interviews, saying the facility helped provide Australia with a “range of options”.

The opposition’s foreign affairs spokeswoman Penny Wong said Prime Minister Scott Morrison should be “straight with people” on where the Pfizer doses were coming from.

“If Mr Morrison has had to resort to accessing vaccines intended for developing countries, he should be upfront about that,” she said. “Of course, if Mr Morrison had done his job last year and secured sufficient supplies, we wouldn’t be in this position.”

The Department of Foreign Affairs and Trade was contacted for comment.

Stay across the most crucial developments related to the pandemic with the Coronavirus Update. Sign up to receive the weekly newsletter.