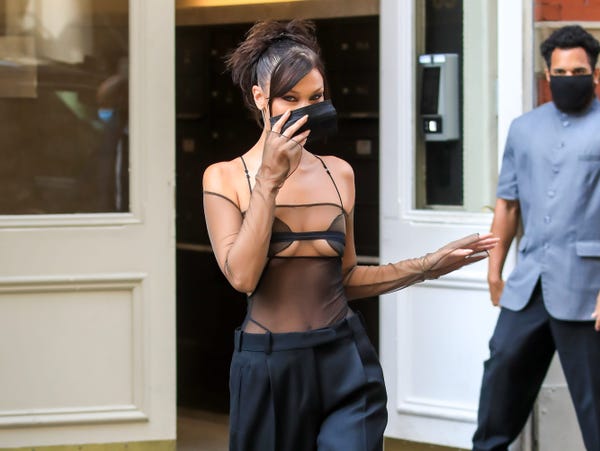 Fans of Bella Hadid are familiar with the model's affinity for fashion inspired by the 1990s and early 2000s.

Hadid's latest outfit was no exception.

Bella, the younger sister of model Gigi Hadid, was pictured in New York City on Friday wearing a sheer, layered black bodysuit. The deconstructed garment, with thin straps and mesh detailing, is from designer Nensi Dojaka and was not available for purchase at the time of writing.

Hadid also wore a pair of black trousers and $500 By Far heeled sandals with chain-link detail. On her Instagram Story, Hadid credited stylist Carlos Nazario for her ensemble. She accessorized with a pair of thin hoop earrings.

Hadid's makeup also exuded the 1990s with a nod to the grunge style. In the era of face coverings that can make wearing lipstick and other cosmetics a challenge, Hadid's makeup artist, Erin Parsons, opted to give the model a dramatic eye look that stood out even while wearing a face mask.

Her makeup, featured in an Instagram post from Parsons, included smokey shadow and winged liner that rimmed her eyes.

Hadid's hair, styled by Evanie Frausto, was pulled into a high ponytail and included strands that framed her face, as well as pieces that offered a spiky look — a nod to the popular '90s hair trend.

Hadid was believed to be sporting her nostalgic, sheer outfit on Friday while attending a rehearsal for the VMAs, which are Sunday.

She's set to be a presenter at this year's awards show, according to Billboard. The VMAs will be filmed from various outdoor locations throughout New York City's five boroughs. Some of the show's performances — which include Miley Cyrus, Lady Gaga and Ariana Grande, BTS, and more — will have socially-distant audiences.