Women are experiencing a "gender disaster" of job losses and long-term financial insecurity and many will be "scarred in the labour market" unless economic recovery efforts are female focused.

After Australian Bureau of Statistics payroll data this week revealed Victorian women lost jobs at more than four times the rate of men in July, the state's gender equality agency has called for an independent economic panel to advise government on job creation for women. 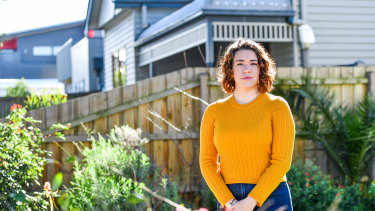 Retrenched hospitality worker Bel Tully has no idea how life will pan out for her when JobKeeper ends.Credit:Joe Armao

Experts are warning of a generational financial catastrophe for young women and of severe hardship for women intending to return to work in their 40s after time out for child rearing.

They say the federal stimulus focus on “shovel-ready” jobs in industries that employ few women, and the fact childcare workers were the first and only group to have JobKeeper removed early mean women are being left behind in the recovery.

Tanja Kovac, the CEO of the state's peak body for gender equity, GenVic, said state and federal treasuries lacked "gender-economic muscle" to design budgets that would stem women's economic decline due to the pandemic, and more risked falling into poverty.

"We've got job losses at nearly five times the rate of men, and those women are not going to be able to return to work easily," said Ms Kovac, former chief of staff to the late minister for women, Fiona Richardson.

We've got job losses at nearly five times the rate of men, and those women are not going to be able to return to work easily.

"In Victoria, the latest ABS data shows women's full-time unemployment rate is 8.7 per cent, far higher than men's at 6.1 per cent. What stunned us in the first round of stimulus is why so many measures were directed at trade and bricks-and-mortar construction when it's clear the industries that have laid off significant numbers are in gender-based, women's industries."

"We will have a two-lane road to recovery, a fast track for men and a slow lane to nowhere for women," she said. GenVic dubbed the current economic crisis a gender disaster.

On Friday, the organisation called on the state government to provide $1.05 million over four years to support creation of a gender specific panel including experts from industry, academy and the private sector including gender-focused economists to advise on "targeted economic stimulus and initiatives to assist women who have lost jobs and micro-enterprises".

Victoria's Minister for Women, Gabrielle Williams, agreed "the economic downturn resulting from the coronavirus pandemic is unique in its disproportionate impact on women". She said all governments needed to be mindful of this so an equitable recovery can be achieved.

Payroll data from the ABS showed of the 235,000 jobs lost in April, 55 per cent were women's, and its figures show as Victoria's infections climbed in the second week of July, jobs held by women fell by 2.3 per cent compared with those lost by men, at 0.5 per cent.

Women's employment specialist Professor Rae Cooper warned women faced serious long-term disadvantage and were already struggling. "We are going to see a generation of women who are scarred in the labor market and that has an impact on access to jobs and lifetime earnings," she said.

"We see a group of women who are really struggling in terms of mental health and wellbeing, this is an urgent issue."

"The [federal] government doesn't seem to be reading the ABS data otherwise they would be doing something about it; it is very serious concern," said Professor Cooper, who is co-director of the Women, Work and Leadership Research Group at the University of Sydney business school.

Sue Morphet, president of the corporate leaders organisation Chief Executive Women, said her group would ask the Morrison government to "bring a gender lens to the budget on every single thing that is done with it.

"We want the budget to be looked at and the question asked, 'Does this help women as well as it helps men?' Or, if we're doing things that are very male-centric, are there equal and opposite female-centric measures as we know this is helping all parts of our economy – including youth."

Ms Morphet said her members want it to be identified in the budgetary process "how policies will impact women and girls so we address equality of recovery for all".

Emma Dawson, executive director of the economic think tank Per Capita, said it was a serious concern that "several hundred thousand women" who lost work have dropped out of the workforce altogether and of superannuation withdrawals – 50 per cent were by people aged under 35 – half of the young people who did were women who had "completely emptied their accounts".

"They have withdrawn super at a time when many are about to exit the workforce for child-rearing and will come out after years when they haven't accrued any at all," said Ms Dawson. "They will find themselves with very, very little money to rely on and we will see an even wider increase in the retirement poverty gap [between men and women]."

She backed calls to make state and federal budgets "gender responsive" through the use of independent advice, saying "it is critical; there isn't the capacity in the public sector to do this well, finance departments at state and federal levels are dominated by men."

Bel Tully, 27, lost her front-of-house hospitality industry work early in the pandemic and has no idea how her employment life and financial security will pan out after JobKeeper ends. Like plenty of her friends, she withdrew money from her super account worried about having no safety-net savings.

"A big discussion when we first started talking about accessing our super in case of emergencies was, 'surely this is better than going into debt, surely 60-year-old me will understand' [but] we're in our 20s, we're not supposed to touch it for another 40 years. I don't know what 60-year-old me is going to think," she said.

Ms Tully has not touched the money but fears if she is not eligible for the second wave of JobKeeper she may need to. She is trying to stay focused on the short-term: "I'm just reminding myself that I have people around me, and not everyone's that lucky."

08/15/2020 Lifestyle Comments Off on Calls for female-focused budget as women face financial ‘gender disaster’
Recent Posts
We and our partners use cookies on this site to improve our service, perform analytics, personalize advertising, measure advertising performance, and remember website preferences.Ok