Bringing back past favourites to take on new challengers is all the rage in reality TV land. From MasterChef to Survivor, everything old is new again, and it was inevitable that Big Brother would embrace the trend with typical ferocity. So it is that a squadron of ex-contestants have this year stormed back into the house, to pit their experience against the fresh-faced enthusiasm of a pack of first-timers. But the burning question is: having gone through the glamorised house arrest of a BB series once, what motivates someone to voluntarily put themselves through it again? 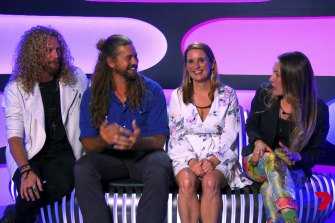 Everything old is new again in reality TV, including Big Brother, with fan favourite and 2003 winner Reggie – Regina Bird – back on the show.

For 2012’s runner-up Layla Subritzky, the answer lies in the transformation the show’s undergone since she was last there. “It’s a completely different format this time, and that’s a bit more of a challenge for me. I’m so used to the old ways of Big Brother – since I was 10 years old I’ve wanted to do it that way – so to be able to try this new format to me is great. I’ve always loved a challenge,” says the 33-year-old Briton, who has also demonstrated that love on Celebrity Apprentice.

Big Brother has certainly gone through some changes. This year will see some of the returning players enter the house through Big Brother’s “secret underground sewer”, while others will sneak into the house’s “mainframe” to take control of the house. The whole thing sounds very cinematic – Spy Kids with a side of Teenage Mutant Ninja Turtles. Other innovations include the “Head of House vote”, second chance challenges allowing housemates nominated for eviction to dodge a bullet, and themed weeks. But the biggest shift for veterans like Layla is that rather than a public vote to determine evictions, the housemates will vote each other out themselves. This means that collusion and manipulation of one’s competitors becomes key, as compared with the older version of the show, wherein contestants tended to simply showcase their personalities to the nation and hope the audience took a shine to them.

“We’re used to just going in, having a ball, talking crap to people,” says Subritzky, adding that it’s more strategic this time around.

Winner of Big Brother 2004 Trevor Butler says he went in “with a mindset of just going in there and having a bit of fun. I think that’s the reason they put [Layla and I] in. The show’s very strong when it comes to strategy and the stress levels – we’re more laid back, taking it easy.”

“If you’re up against a whole bunch of people that all they care about is winning, it’s kind of nice to be the one who’s having fun.”

“The funnest things happen when you’re taking it easy,” Subritzky chimes in. “It’s not premeditated, it’s just ‘well that was funny, didn’t mean to do that, but that works’.” Not that thoughts of strategy are entirely absent from her mind. “I think being laid back, being more lighthearted and fun-loving, that IS a tactic. If you’re up against a whole bunch of people that all they care about is winning, it’s kind of nice to be the one who’s having fun. You need someone having fun when you’re in a pack of sharks. You need a Dory when you’re in a pack of sharks or hyenas.”

Images of fish-hunting hyenas aside, it might be said that Subritzky has a very obvious reason to come back to the house: she came second in 2012, which means there’s unfinished business for her. For Butler, who won a million dollars when he triumphed all those years ago, it would seem like he has nothing left to prove.

For him, it seems that the comeback is, like his original stint, just about having a bit of fun. Plus, as he says, “we were in lockdown any way, so we didn’t have anything else to do.” Staving off boredom is a legitimate reason for subjecting yourself to reality TV torture. But that’s the rub, isn’t it: for all Trev and Layla’s talk of fun, isn’t being on Big Brother, like, really hard?

“You make the fun,” says Butler. “People go in the house and are on edge 24/7 and you sit there going, ‘Mate, you are going to absolutely die’. If you don’t go in with an open mind, to have some fun and enjoy the moment for what it is, you will enjoy it. If you go in with a plan, good on you – but when the plan falls apart, you’ll look back at it later and think, I should have been more myself.”

One returning housemate who’s going in with a definite plan is Tim Dormer, who won the show in 2013 and has come back with the express intention of becoming the first person ever to win Big Brother twice. He’s already had a second bite at the cherry, having competed in Big Brother Canada, where he came third, and is back again to chase that dream.

“The chance to do something that nobody in the world has ever done before – win two Big Brother crowns – that hooked me in,” says the man who earned a reputation first time round as one of the sharpest operators in the show’s history.

Strategy is on his mind again. “I knew I would have a huge target on my back,” he acknowledges, “so I knew that I had to build relationships quickly, not be too much of a threat, and actually use my big character as a strength – that people would want to work with me because I understand the game, and that I’ll always be a bigger target than them, so while I’m in the game they’ll actually be a lot safer. I let everyone know early on: I’m not here to target you, but the minute you try and come for me, game on.”

From “just here to have a bit of fun” to “if you come at the king, you better not miss”, it would appear the new season has, if nothing else, a diversity of approach to recommend it. Bring on the voyeurism.

A cultural guide to going out and loving your city. Sign up to our Culture Fix newsletter here.

05/01/2022 Lifestyle Comments Off on Can Big Brother with old star faves captivate us?
Recent Posts