Liberal backbencher Craig Kelly has been slapped down for advocating alternative cures for COVID-19 in a warning from the nation's top medical officer that there is no evidence to show the treatments work.

After days of growing debate over the backbencher's claims, Chief Medical Officer Paul Kelly said the latest medical studies had not found drugs like ivermectin and hydroxychloroquine were useful in preventing or treating COVID-19. 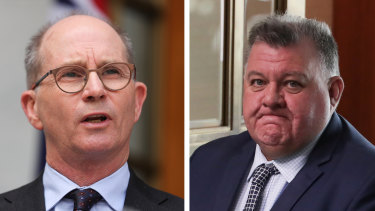 Professor Kelly was reluctant to criticise the backbencher by name, other to say they were not related, but he rejected Mr Kelly's key claims for coronavirus cures as well as his complaints about rules that require people to wear masks.

The Liberal backbencher, who represents the seat of Hughes in south-western Sydney, has repeatedly challenged government policy in dozens of Facebook posts supporting alternative treatments for the coronavirus.

"Forcing children to wear masks is causing massive physical and psychological harm that can only be defined as child abuse," Mr Kelly wrote on Facebook.

In another post, he said denying ivermectin to patients was responsible for "over 100,000 deaths" in Mexico. He has also called for the use of hydroxychloroquine, a drug also backed by US President Donald Trump.

Health Minister Greg Hunt would not refer to Mr Kelly by name on Tuesday when asked about his claims, advising people instead to listen to official advice.

Professor Kelly said he had worked in the past on the use of ivermectin to treat river blindness in Africa and knew it was effective for that purpose, as well as against scabies, but it had no proven use against COVID-19.

"There is no evidence at the moment that it has any benefit or any use in relation to the prevention or treatment of COVID-19," he told a press conference on Wednesday.

"In terms of what backbenchers from one side of Parliament or the other say, that's a matter for them."

Professor Kelly was pressed on Mr Kelly's remarks, however, on the grounds the government was criticising immunology and virology experts for expressing concerns about the AstraZeneca vaccine but was not countering claims from the government backbencher.

"He needs to decide what is the appropriate thing for a member of Parliament to be commenting on," Professor Kelly said.

"I'm not going to talk further about this because it just gives prominence to views that I just don't agree with and are not scientifically-based."

Hydroxychloroquine is an established treatment for malaria but Australian health officials have rejected claims about its effectiveness in treating COVID-19.

"There have been many studies in the use of hydroxychloroquine and, in fact, early on there was some hope in terms of small studies done on treatment in France.

"But, subsequently, there have been many, many studies on hydroxychloroquine for both treatment and for prevention of COVID-19 and, at this point, there is no evidence it is useful for either of those."

Acting Prime Minister Michael McCormack said on Wednesday he did not agree with Mr Kelly's claim that mandated mask use was child abuse but he argued against forcing the MP to take down his Facebook posts.

"It's a matter for Craig Kelly," he said. "I'm not in favour of censorship. I'm a former newspaper editor. I don't believe in censorship. But you've also got to be a bit sensible about what you do put online."

Asked if Mr Kelly's remarks would cause panic and fear in the community, Mr McCormack said he did not think so.

01/13/2021 Lifestyle Comments Off on Chief Medical Officer slaps down Craig Kelly’s COVID-19 theories
Recent Posts
We and our partners use cookies on this site to improve our service, perform analytics, personalize advertising, measure advertising performance, and remember website preferences.Ok