Opening up. Amid Pregnancy Loss Awareness Week, Chrissy Teigen is remembering her postpartum journey and sharing her candid thoughts via social media.

“Pregnancy loss awareness week you say?? I know. I feel like I never let you forget it, either, the Cravings founder, 35, wrote via Instagram on Saturday, October 16. “But I was going through BTS of cookbook making with @adeenasussman and came across this photo, taken soon after losing our little jack.”

In the snap, the model laid down on a cozy brown couch, snuggled up in a fluffy blanket as cookbook coauthor Adeena Sussman scooped a portion of food into a bowl beside her. 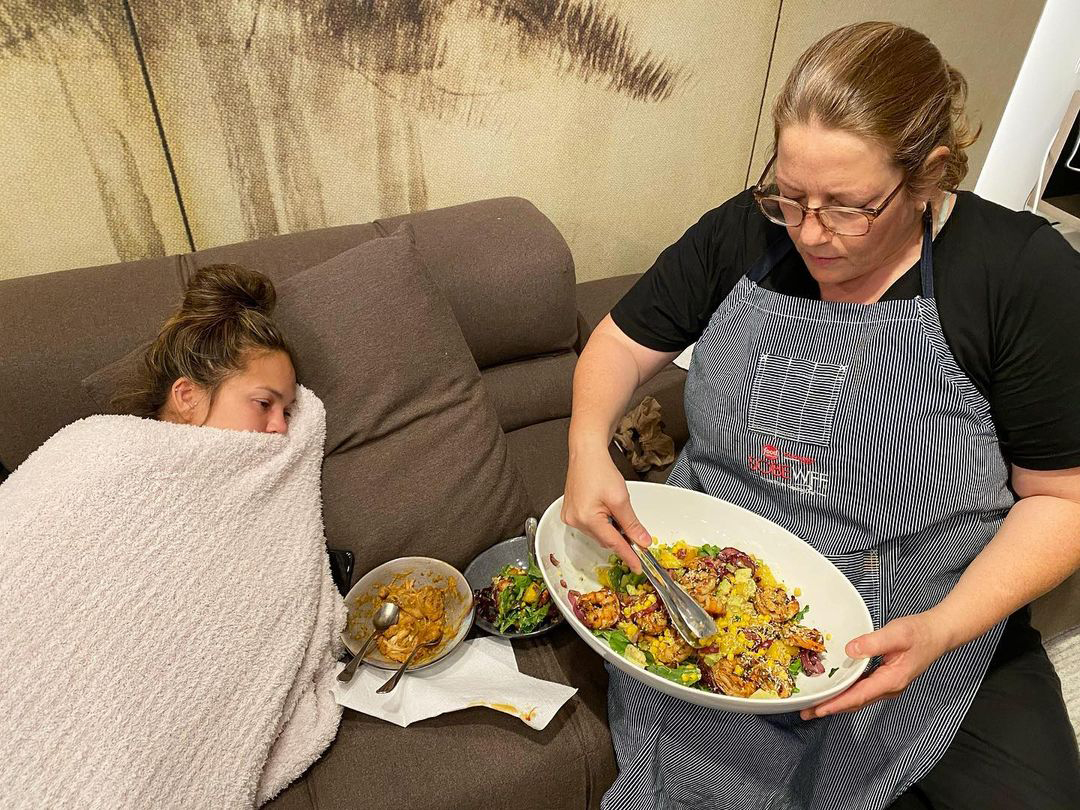 “As I’ve said before, I absolutely threw myself into writing, quickly, to distract from the trauma, the pain, the grief,” Teigen explained in her post. “But not all days were productive. Many were…this. Days I felt suctioned to the couch with barely an appetite to even taste our recipes. It was during this time that i truly believed Adeena was sent by god herself. When I tell [you] this book saved me, i only kind of mean that. It was Adeena. Love u guys. X.”

Stars Who Struggled to Conceive Children Share Their Fertility Issues

The Cravings: All Together author further shared details on her heartbreaking emotions at the time as she commented, “Phew zoom in on that face. 😢.”

As the Utah native noted in her social media upload, her Saturday message is hardly the first time she’s been outspoken about suffering a pregnancy loss. Nearly one month earlier, she shared a candid note alongside a selfie of her postpartum body.

“It’s really weird when you lose a baby and your body gets paused in time,” the Deal or No Deal alum wrote on September 18. “Usually you’d gain your ‘yumyums I’m praaaagnant!’ weight, then put on the weight of your little bebe. Then, ideally, you’d have your baby. And you would feed it from your boobs and your body would know to charge through and do what it does to get you back into fighting shape, whatever that may be, for however long it takes (F—K a snap-back).”

She continued, “But man. When you lose a baby halfway through, your body just pauses. It has nothing to do. No one to feed. And you’re just…stuck. Stuck with saggy boobs that were prepping to be milk bags, a belly that was ready to bake. I would be lying if I said this did not majorly suck. Not only are you ummmm extremely, diabolically sad at what could have been, but you have this daily reminder every time you look in the goddamn mirror.”

The Bring the Funny judge and husband John Legend — with whom she shares daughter Luna, 5, and son Miles, 3 — announced they were expecting their third child in August 2020. One month later, she gave birth to their late son Jack after suffering a placenta abruption and having blood transfusions.

“We are shocked and in the kind of deep pain you only hear about, the kind of pain we’ve never felt before,” Teigen wrote via Instagram at the time, alongside black-and-white hospital photos. “We were never able to stop the bleeding and give our baby the fluids he needed, despite bags and bags of blood transfusions. It just wasn’t enough.”

She concluded in her note, “To our Jack – I’m so sorry that the first few moments of your life were met with so many complications, that we couldn’t give you the home you needed to survive. We will always love you.”