As far as openings go, a comedian accidentally sloshing the contents of a water bottle over the stage isn’t particularly promising.

However, it’s testament to Blake Freeman’s ease as a performer and his natural funniness that he fashions this minor accident into something genuinely comedic. 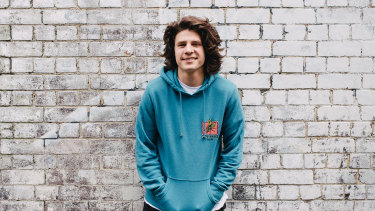 It’s touching how much Blake Freeman wants his audience to enjoy every bit.Credit:

A winner of the Best Newcomer award at the Melbourne International Comedy Festival in 2019, Freeman seems even younger than his 25 years, with his tendency to warn us when a story is about to get “hectic” and his habit of finishing sentences with a puppyish “which is sick!”

Material for his first show largely mined his own youthful bumbling, but this year’s apparently self-titled effort expands his range into flights of fancy, like how Isaac Newton punched up his anecdotes and how he’d have struggled to communicate with Stephen Hawkins if they’d ever met.

These more cerebral wanderings were inspired by a fear that he wasn’t smart enough and an aborted attempt to “serious” books. “Bookstores are wild,” he tells us, wide-eyed, “They let just anyone buy them!”

Freeman has a loose, unfussy style, and it’s touching how much he wants his audience to enjoy every bit; he often apologises for the slighter moments, like a modest payoff to an extended riff about how we’re all essentially carbon.

His pleasantly rambling, self-deprecating tales often cast him as a good-natured manchild, but inventive musings on how to fool the face recognition technology on mobile phones or his alternative idea for wedding vows suggest he’s more idiot savant than an idiot.

Equally as winning are the reflections on how his girlfriend is more poised and intelligent than he is, a welcome antidote to every misogynist open mic hack you’ve ever seen.

There may be slicker and tighter shows at this festival, but there are few as charming.

Blake Freeman is at the Factory Theatre until May 16.