Dixie D’Amelio has been crushing it on stage at Jingle Ball and opened up about her first performance, when her sister, Charli, joined her on stage!

If you’re on TikTok, then you’ve definitely seen the viral videos of Dixie D’Amelio slaying her Jingle Ball sets while on tour through the holiday season. The ‘Be Happy’ singer surprised fans during her first show at The Forum in Inglewood, CA when her sister, Charli D’Amelio, appeared on stage with her backup dancers. Recalling her first Jingle Ball show, Dixie told HollywoodLife in an EXCLUSIVE interview, “First show, I had a terrible migraine, from the beginning of the day, I couldn’t do anything. I was like, this is going to be awful, can’t even hear myself talk, I’m in so much pain.”

However, Dixie went on to kill it in Inglewood and admitted she “went back to my room and fell asleep for two hours.” “I couldn’t move, it was so bad. I was in so much pain, but I was like ‘I just need to do this and then the next one will be better,’ and it was.” The singer couldn’t say much about Charli joining her on stage, as it will be a storyline in the upcoming season two of The D’Amelio Show, but she said she was “so excited” to have her there. “It was so nice to have her on stage,” Dixie gushed. “I needed it, I was freaking out.” 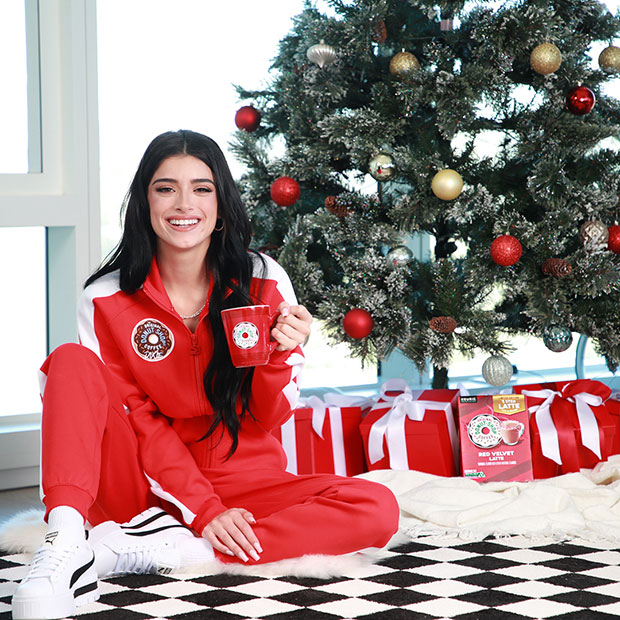 As mentioned, the D’Amelio family has been filming season two of their Hulu show, and Dixie revealed this season will “be totally different from the last.” “The cameras can actually follow us around now, so I’m so excited for everyone to see all the things that we’ve been doing,” she told HL. “I’m showing more of what I’m working on with music because I’m going on tour, and things I’ve been working on with brands and in fashion.”

Speaking of working with brands, Dixie spoke to HollywoodLife in partnership with The Original Donut Shop, helping them promote their limited-time only One Step Red Velvet Latte pods, with The Original Donut Shop x Dixie red track suits! “Honestly, the Red Velvet Latte is so good. I really like sweet things, and this is just it tastes like I’m biting into a red velvet cupcake!” Dixie gushed. She set up a giveaway on Instagram for some lucky fans to get their hands on the red tracksuits this holiday season, so they can cozy up with their lattes in style!

12/22/2021 Lifestyle Comments Off on Dixie DAmelio Admits She Fought Through Terrible Migraine For Jingle Ball Debut: I Was In So Much Pain
Recent Posts