States should be incentivised by the federal government to scrap lucrative stamp duties, housing lobby groups and academics have said amid warnings the coronavirus pandemic is exacerbating wealth inequality. 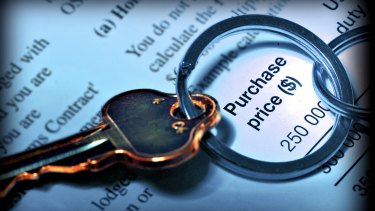 Stamp duty adds tens of thousands of dollars to the upfront cost of a median-priced house in Sydney and Melbourne.Credit:Jim Rice

Submissions from groups including the Housing Industry Association (HIA), Urban Development Institute of Australia (UDIA), University of Canberra, Domain and the Urban Taskforce requested either stamp duty be put on the agenda or said the dramatic escalation in home values during the pandemic was threatening to drive inequality among generations.

Improving affordability by reducing upfront costs is a major focus of many submissions to the House of Representatives Standing Committee on Tax and Revenue, adding to longstanding calls from economists and the Organisation for Economic Co-operation and Development for reform of transfer duties.

Stamp duties are charged by state and territory governments each time a home is built and can add up to tens of thousands of dollars to house prices, which have continued to hit record highs during the pandemic. Home buyers in all states, except the ACT where stamp duty is being phased out, have faced an increase in the effective rate of stamp duty over the past 20 years.

The UDIA slammed the federal government for taking a “hands-off approach to tax reform”, particularly in regard to state property taxes.

“This is neither purposeful nor logical,” its submission said. “Meaningful tax reform is achievable, but it requires a whole-of-federation endeavour.”

The HIA said stamp duty was inequitable and inefficient but reforming it was not simple as it could influence how GST revenue was distributed.

Builder and developer lobby group the Urban Taskforce also recommended the federal government “take the lead in discussions with the states to abolish stamp duty and replace it with a broad-based tax”. While acknowledging transfer duties were the realm of the states, it said they had been slow to shift away from the “river of gold” taxes.

The NSW government is currently consulting on phasing out the one-off large stamp duty in favour of a smaller but annual land tax.

The University of Canberra said a move away from stamp duties would boost efficiency and economic growth, lifting federal income and company tax collections.

“There would therefore be an argument for the federal government to make incentive payments to the states to encourage them to undertake this reform,” the university’s submission said.

Property listings website Domain indicated shifting to land taxes could dramatically reduce the upfront cost of buying a house but noted this raised the risk of creating a two-tier property market, particularly if buyers were offered a choice between stamp duties and land taxes.

Liberal MP Jason Falinski, who is leading the inquiry, said the pandemic had shown many of the previously claimed reasons for lack of housing affordability were “bunkum”, overstating the effects of immigration and low interest rates compared to supply.

“What has already emerged from the first three witnesses [in the inquiry’s public hearings] is that the housing market can’t increase supply despite housing prices rapidly going up,” he said, adding restrictive planning systems and inefficient councils “have a lot to answer for”.

“The challenge is that every time the Commonwealth has attempted to improve accessibility to housing for younger Australians, state and local governments have hampered supply responses from the market,” Mr Falinski said.

“The benefits of replacing transaction taxes such as stamp duties with broad-based land taxes is well known. What is not understood is why state governments are so resistant to making a change that benefits everyone, especially those people trying to get a foothold in the housing market.”